Last week, I ordered a lobster roll for delivery from a restaurant that hasn't been open since October 2.

I wasn't expecting it to. (And at $59.21 with the delivery fee, service fee, sales tax and tip, the no-show was probably for the best.) But nothing on Grubhub, the national food delivery app I used to place the order, hinted that a lobster roll wouldn't arrive in 45 to 55 minutes.

Order confirmation in hand, I watched on the Grubhub app as an orange cartoon car navigated a map of Burlington, headed to Farmers & Foragers Dockside. Dreaming of summer days by the lake, I could almost taste the chunks of buttery Maine lobster.

Twenty minutes later, Grubhub customer support called to say the restaurant had "run out of the item" and I would be refunded my $59.21 within five business days.

"Delivery isn't going to go away." Perry Farr tweet this

While Farmers & Foragers currently runs a food truck on the University of Vermont campus, its seasonal location at the Burlington Harbor Marina won't reopen until mid-May. "There's a bunch of docks being stored there right now," co-owner Solomon Bayer-Pacht told me when I called him later that day.

Bayer-Pacht didn't know that Farmers & Foragers was listed on Grubhub. In fact, the business has never partnered with any national delivery apps, such as DoorDash, Uber Eats, Postmates or delivery.com. All those apps take a percentage of the bill that many restaurant owners find prohibitive.

But Farmers & Foragers isn't the only restaurant that the apps have listed without permission, in Vermont or elsewhere.

In a statement provided to the Vox Media website Eater in 2019, Grubhub admitted to adding "non-partnered restaurants" to its service "so we will not be at a restaurant disadvantage compared to any other food delivery platform."

Other apps use the same strategy to draw in customers looking for more delivery options. In 2021, several cities and states enacted legislation to end the practice, which remains legal in Vermont. In November 2020, DoorDash announced that it would no longer add new restaurants to its app "without consent."

Meanwhile, local restaurants are calling out the issue on social media. Last week, Burlington's Barrio Bakery posted a note to customers: "We do not accept or fulfill Grubhub orders. Please do not order through them but stop into [sic] the bakery instead." Winooski's Mule Bar posted: "Remember, when ordering to-go please do not order from any 3rd party delivery services. We do not participate."

"They don't even tell us who the order is for or where it's going," Bayer-Pacht said of the apps. "If we screw up an order that's placed online with us directly, we can make it right. But they hold all that information." 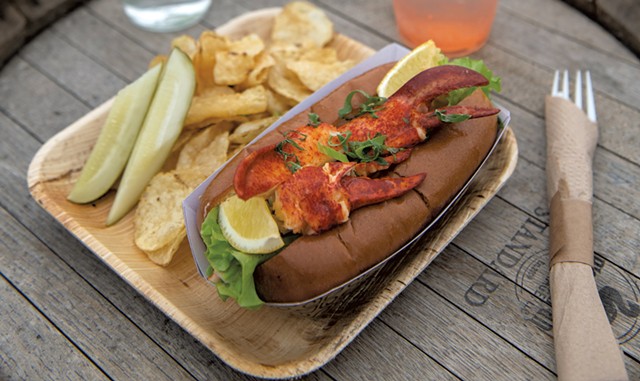 Before Farmers & Foragers opened its dockside location in the summer of 2020, co-owners Bayer-Pacht and Lauren Johnson looked into joining each of the national delivery apps.

To draw in restaurants during the early pandemic shift to takeout and delivery, the apps were waiving fees and offering deals. Bayer-Pacht recalled that, even with those discounts, the tech companies charged restaurants about 30 percent for delivery orders and 15 percent for pickup orders placed through their apps.

Once Farmers & Foragers Dockside opened, things quickly got too busy for delivery anyway. Bayer-Pacht and Johnson decided not to partner with Uber Eats, the one they'd most seriously considered, or any of the other delivery apps.

Still, toward the end of the restaurant's second summer by the water, DoorDash and Uber Eats drivers started showing up to place orders for customers.

"I don't know how they were getting the menu or how much they were charging for things," Bayer-Pacht said.

Farmers & Foragers has a sample menu online, but the menu at Dockside rotated daily. The apps' drivers frequently showed up with confirmed orders for dishes from the truck's catering menu — and, in one case, for a salad from the previous fall.

If the order happened to be for a staple item, such as Farmers & Foragers' popular perch tacos, the restaurant would fill it.

"Because it's not the customer's fault," Bayer-Pacht said. "We're trying to get them what they wanted, and it's an opportunity for us to feed somebody. But it's feeding the beast, too."

On beautiful summer nights, the two chefs on the truck were sometimes so busy that Farmers & Foragers stopped doing takeout altogether to keep the wait reasonable for on-site customers. When they did make an order for a delivery driver, it was a lengthy wait. Customers didn't get their food by the app's quoted time, making the restaurant look bad.

With all the added fees, Bayer-Pacht worried that customers would associate Farmers & Foragers with high prices, too. Lobster meat was already expensive last year — around $70 per pound for fresh meat, up from a maximum of $44 per pound prior to 2020 — and the truck's lobster roll reached $34 to cover the sky-high cost.

"You're kidding," Bayer-Pacht said, when I told him the amount. "I wasn't happy when people were paying $34."

Bayer-Pacht has emailed Uber Eats and DoorDash to have Farmers & Foragers removed from their services, but he has not received a response, he said. He now plans to contact Grubhub, too. He's still thinking about adding delivery to his business, but it's likely to be in-house.

Bayer-Pacht isn't opposed to the apps as an option. "But it's completely unacceptable that these big, national delivery services are just adding people," he said. "You gotta work with the people who want to work with you." 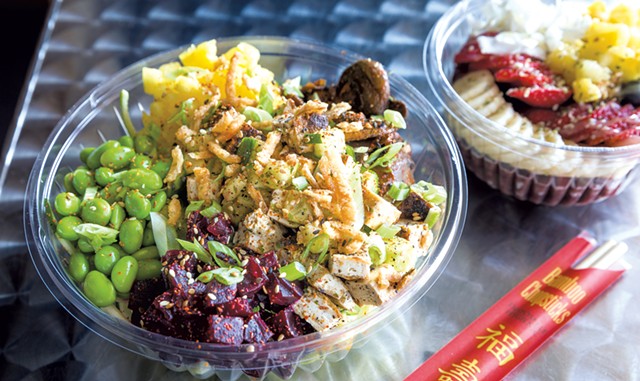 Some businesses do want to work with them. The Scale was an early adopter of delivery apps. Perry Farr and her husband, Neil, opened the Scale's first location in Williston in March 2018 and signed up with DoorDash and Uber Eats "as soon as they came to Vermont," Farr said.

Since their Williston location has only eight seats, takeout and online ordering were always an important part of the couple's business plan. They serve their Hawaiian-style poke bowls in disposable packaging; with delivery, the only change they make is to staple the bag shut and add tamper-evident safety seals around the edges of bowls and bags.

Before the pandemic, delivery orders were sparse, Farr said. One or two would trickle in through the apps each day. Several times, while staff were trying to close for the night, a DoorDash order would be sitting in the restaurant waiting for a driver who never came. Customers looked to the Scale for a solution — or a refund.

"So Neil would go drop it off," Farr said. "We were still paying the commission and paying our staff to stay late waiting for people, but at least we weren't eating the cost of the food."

In the early days of the pandemic, through summer 2020, the Farrs stayed off the apps due to a lack of drivers and general uncertainty. They looked into doing their own delivery as they prepared for the opening of the Scale's second location in Essex Junction that November.

"Delivery isn't going to go away," Farr said. "But that proved to be tricky. It's hard to bring in a set of drivers when there's a labor shortage."

The Farrs found that the commissions the apps charged — the sticking point for most restaurants — were less than it would cost to add eight drivers to their staff to serve both locations. When they considered the logistics of hiring, insuring, scheduling and managing those extra employees, while depleting the tip pool for the employees they already had, they decided DIY didn't make sense.

The Scale went back on DoorDash. With two locations, Farr was able to negotiate a lower-than-average commission fee, though she declined to specify the number.

DoorDash covers a wider geographic range than Uber Eats, which wouldn't go to St. George or Richmond, Farr said. Delivery apps' algorithms put rural and commercial areas at a disadvantage, because they take longer to reach and don't account for as many orders as densely residential areas. Even on DoorDash, the Scale's Essex Junction location, which delivers to Colchester, Winooski and other more residential areas, does about twice as much delivery as the Williston location.

Farr also noticed that many large chain restaurants use DoorDash. "It led me to believe there was a reason why they picked it, since those people do not make choices willy-nilly," she said.

As the number of delivery-app drivers has grown in Vermont, the Scale no longer has a problem with abandoned orders at the end of the night. Panera Bread, just a mile away, draws a steady stream of DoorDash drivers to the area.

"The delivery drivers are all supercool," Farr said. Some even call to place orders of their own for a Firecracker Bowl with ahi tuna or a Tropical Açaí Bowl once they know they have one to pick up.

Farr is happy with DoorDash, which she regularly promotes on the Scale's social media. She understands why some customers are wary of the apps and the fees they charge restaurants — but, she said, what's worse for restaurants than delivery apps is people not eating.

"Whether it's a delivery order or an in-person order, we're getting food in front of people," Farr said. "If you want to support a business, and that business is choosing to do delivery, you're supporting them."

For his part, Bayer-Pacht concedes the usefulness of delivery apps. "Maybe it would be a good thing for us to be on one of these sites. It's a business, and it's fine for them to be a business," he said.

He just wants to have a choice either way.