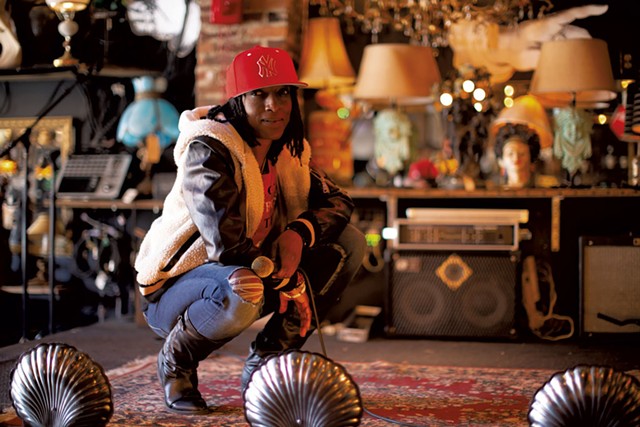 Omega Jade was in her element, holding court at Burlington's Light Club Lamp Shop and reminiscing on the long path that brought her to the Green Mountains. "My first impression of Vermont? Extreme culture shock," she said. Born in Arizona and raised in San Diego, the rapper and comedian likely meant that in more ways than one.

"It was cooooold," she said with a bitter chuckle, still weary from winter. "I'm from Cali, so just saying it was cold is such an understatement." Describing her sense of displacement further, she added, "I couldn't purchase certain food and hair products unless I left the state, and I didn't really see many people of color until I moved to Burlington."

At that, Jade, 40, grew contemplative, flashing back to bleaker times. Given her outsize personality, it's jarring to contemplate this single mom feeling uncertain and small, as she described herself, when she arrived in 1999.

Jade's circumstances have certainly changed since. That she chose to meet a reporter at one of the more eclectic venues in the Queen City was no accident. Light Club Lamp Shop is home to her Rhyme and Unreason Show, a semi-regular series that features a chaotic mashup of standup comedy and freestyle rap. The showcase has become an unlikely success story for its hardworking host. And it's emblematic of her diverse skill sets as a rapper, comic and producer.

In conversation, Jade is a roller coaster of contradictions. She's brutally honest and stubbornly evasive in equal measure. She boasts a sort of confident insecurity, narrating her own social anxiety in real time and, of course, cracking jokes.

When asked about her musical upbringing in California, she demurred: "My circumstances wouldn't allow me to really experience the local scene." She didn't explain, but she didn't have to. One of the best singles in Jade's catalog, "United States of Dope Men," sketches it out in broader strokes: "First I was a latchkey / then I went state custody / I was taking Thorazine before I was a teen."

The song is more than an autobiography, though. In it, Jade connects the dots of her lived experience to a broader culture of drug dealing, even taking shots at the famously fake rapper Rick Ross along the way. Blurring the lines between personal and political is a common thread throughout her work, whether rapping or cracking jokes.

Jade came to comedy in 2015 under unusually dire circumstances. She had suffered a nervous breakdown after fighting back against an abusive man. Following the altercation, she was arrested and sent to the Brattleboro Retreat, where she had an awakening of sorts.

"I realized that the more angry or upset I was, the more humorous I became," she recalled. "My therapist at the time told me that if I didn't pursue comedy or some outlet, she expected to see me return. So..." At that, she shrugged and laughed.

Comedy turned out to be exactly the right prescription. Doing standup around Burlington offered both catharsis and a confidence boost. It also reconnected Jade with her spoken-word roots.

"Poetry has always been an outlet for me, and doing comedy made me think I could pull off being an MC, too," she explained.

Now, if you're going to make an impression in the 802 rap scene, the best place to do it is Third Thursdays at the Monkey House in Winooski. The monthly gathering has been a hub for local hip-hop for years, thanks to the tireless efforts of Scottie Raymond and Luke Gauthier. Raymond represents the Anthill Collective, the street-art crew that hosts the annual Above the Radar graffiti festival on Burlington's waterfront. Gauthier, who produces as ILLu, represents Equal Eyes Records, the state's first real hip-hop record label.

"The cypher is the most important proving ground in hip-hop, period," explained Gauthier of the group freestyle rap session. "And especially for our local scene. You have to deliver. That's what it's all about."

Jade has since hosted the event twice, which is a distinct local honor.

"Hosting is a tricky, demanding gig, but she's a rock star," said Raymond. "Super positive, always funny. She's a gift to our scene, for sure."

Jade was at first baffled by her own success.

"I was surprised by how welcoming the hip-hop community was," she said. "I met my producer the first time I went to a cypher! The first time!"

That producer was Burlington's Rico James, with whom she's recorded several tracks that are available on SoundCloud. Asked about her influences, Jade cites Lauryn Hill and Bahamadia. "I miss the female MCs who were empowering and encouraged seeking knowledge," she said.

To a person, Jade's hip-hop colleagues praise her confidence. But to hear her tell it, it's all part of the act.

"Believe it or not," she confided, "it's only been a year since I was having an anxiety attack before every show."

Jade credits meditation and visualization with helping to steel her nerves — that and her four children.

"I believe that what I am doing will be something I can pass on to them," she said, adding that her resilience might be the best lesson she can impart. "I think my confidence only comes from the fact that I was willing to try and fail but still keep going."

Just as comedy led to hip-hop, DIY promotional work has led Jade to discover a new talent: production. Those who participate in her comedy-rap hybrid events agree that she's not kidding about the "controlled chaos" at her shows. Jade conceded that she runs a tight ship.

"My work ethic comes from a mix of only having myself to depend on and the fact that I'm a bit of a control freak," she offered.

"I know it's a calling," she said of curating events. "I enjoy the process of putting on a show. I take the time to consider every aspect. Now it's become a thrill I look forward to. Like, I really don't need a drink at a show, because I get a high from the experience."

Jade refuses to be reduced to an inspirational redemption story. When I dubbed her a success, she cackled back, "I'm still broke!" When I described her as multitalented, she blew it off, asserting that she's really more like "a jackass of all trades."

In discussing her recent accomplishments, Jade emphasized that they have been simply "what I had to do." Just the same, it's impossible to miss her quiet pride — or her hunger.

"We're all looking forward to where her music goes next," confirmed Sed One. "It's like she's spitting bars to prove to everybody that ever doubted her wrong. Including herself."

Omega Jade performs at the Comedy & Cupcakes showcase, Friday, May 24, 7:30 p.m., at FlynnSpace in Burlington. $25. flynntix.org