Ari Kirshenbaum has never thought of himself as a "cool" professor, but a new smartphone app he helped develop is, well, pretty dope.

Kirshenbaum, a psychology professor at Saint Michael's College in Colchester, is the brains behind Indicator, a free mobile app that uses a series of games to show cannabis users how the drug affects cognition.

In one simulation, the player must keep a car from weaving between lanes of traffic as it accelerates and the road becomes icy. In another, a traffic light turns from yellow to red, and the player must correctly estimate the time it took the signal to change.

The exercises are fun, but as players click and count, Indicator measures their focus, reaction time and impulse control — all of which marijuana use can impair.

But unlike with alcohol, there is no standardized unit of tetrahydrocannabinol, or THC, the psychoactive chemical found in cannabis. So while average drinkers may know they can down one beer per hour without becoming intoxicated, they may not understand whether popping an edible would make them higher than passing a joint among friends.

Indicator can help answer those questions, Kirshenbaum said, and at the right time: Vermont's retail weed market is scheduled to open next spring, and consumers will be able to purchase all kinds of marijuana products. The app can help users, particularly inexperienced ones, make informed choices, Kirshenbaum said.

"We saw an immediate need to educate the public," he said. "If we can just get that information into the minds of the public ­— that this is how cannabis might affect your function in a negative way — I feel like I'm doing a public service."

Kirshenbaum has long been interested in public health. A former researcher at the National Aeronautics and Space Administration, he came to Vermont in the early 2000s to study heroin dependence. He's currently working on a National Institutes of Health-funded study of e-cigarette use by young adults and has taught at St. Mike's for 15 years.

"We saw an immediate need to educate the public." Ari Kirshenbaum tweet this

Kirshenbaum was inspired to study cannabis to help make the roads safer for his own growing children. And his interest in the drug became personal when he was diagnosed with cancer in 2019. His friends were happy to supply him with "more than just casserole" to help him heal, Kirshenbaum said, noting that he relied on cannabis to sleep through the night. He realized that other patients, and cannabis users in general, could benefit from understanding how the drug affects them.

Enter Indicator. The app, whose name is a play on the cannabis plant species indica, was born after Kirshenbaum received a $224,000 grant last September from the National Science Foundation to create it. The professor and his partners — Andrew Kaplan, an orthopedic surgeon at the University of Vermont Medical Center, and Chris Lewis, a trained physical therapist — found that Indicator can detect changes in cognition among test subjects who got stoned before using the app.

Indicator asks users what strain of cannabis they consumed, in what form they took it and how long prior to using the app they'd consumed it. They're also asked to rate, on a scale of 1 to 10, how high they feel and to note other feelings — creative, sleepy, focused and so on. The app then spits out a numeric score that tells users how well they performed. The closer to 100, the better they did.

The user's baseline score, taken while sober, can be compared to their performance under the influence to "quantify their high," as Indicator's tagline says. The team will use the data — which are not personally identifiable — collected from the app to gain insight into how products affect users, Kirshenbaum said. That info will be used in the app, in articles for scientific publications and in press releases, he said.

"We know that right now these games, they feel a little bit like a digital SAT, and we hope that will change over time," Kirshenbaum said. "We're asking people to help us with our data acquisition, and, eventually, we're hoping to produce something that can be used nationwide, or worldwide, as cannabis legalization changes." 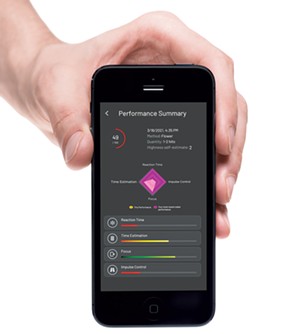 Kirshenbaum is quick to caution that Indicator is not meant to tell users whether they're OK to drive — at least not yet, he said. The app also isn't sophisticated enough to be used as a roadside test for law enforcement, a topic that lawmakers have long debated. Gov. Phil Scott had originally pledged to oppose legislation that didn't mandate a warrantless saliva test for THC, but he let Vermont's bill — without such a provision — become law last October.

Lewis, the CEO of Indicator's parent company, said it would take far more research and data for the app to someday be used like a "pocket Breathalyzer."

"For now, we're focused on home users and their safety," he said.

Kirshenbaum thinks Indicator will be especially useful when the legal weed market opens next year. Data collected from the app could inform dispensary customers how certain products have affected other buyers, he said.

Bridget Conry, director of brand experience at Champlain Valley Dispensary, said she likes the idea of Indicator because it could help people consume cannabis responsibly. The company currently serves medical marijuana users but will apply for adult-use permits next spring, she said.

Dispensary staff already educate clients about products — and recommend that they keep a journal to document their experiences — but Indicator could be another tool, Conry said. The app might even show that cannabis can improve some people's functionality rather than worsen it, particularly if they have chronic pain, she said.

The app provides "a great opportunity to collect more data on how cannabis can actually help," Conry added.

Indicator isn't the only app of its kind. Druid, which bills itself as the "gold standard for impairment testing," has been on the market since 2018 and has shown in peer-reviewed studies that a cannabis user's level of impairment declines as THC leaves their system.

Druid, founded by Mike Milburn, a former psychology professor at the University of Massachusetts in Boston, uses games similar to Indicator's. In one exercise, players are told to keep their finger on a white dot that jumps around the screen while simultaneously counting yellow squares that pop up at random.

Druid then produces a numeric score, also on a scale of 1 to 100, and a higher number suggests greater intoxication. Milburn has found a strong correlation between these scores and blood alcohol levels: Subjects who scored a 50 on the app were likely to have a 0.05 percent blood alcohol concentration in lab tests, he said.

"The app itself is really sort of primitive," said Robert Schiller, the company's CEO, but "the statistical analysis of how you put together a test, and how you make it valid, and how it actually correlates with impairment is extremely sophisticated and complicated."

Druid is now being used in other ways. The team has contracted with construction companies, railway agencies and other high-risk job sites to test employees' fitness for duty — not necessarily for drug use. Druid can detect loss of coordination and focus due to fatigue or illness just as accurately as it can due to cannabis use, Schiller said.

"This is the beginning of how one can use neuroscience in an app for a lot of different applications," he said.

Kirshenbaum, too, can imagine his app being used in the workplace. Rideshare companies, for instance, might want to ensure that their employees are fit to drive.

For now, though, the professor is focused on the short term. His team has applied for a $1 million grant, which would allow researchers to test Indicator in a controlled setting at medical schools across the country. St. Mike's students would also pitch in by using the app — in a sober state, he clarified with a chuckle.

Kirshenbaum said the Indicator project has put Vermont at the forefront of cannabis technology, but for him the reward is more personal.

After surviving cancer, "I asked myself, 'What could I do to help?'" Kirshenbaum recalled. "This is something that I might be able to do with whatever time I have remaining."