Vermont Pride Theater Looks Back on Politics of Exclusion 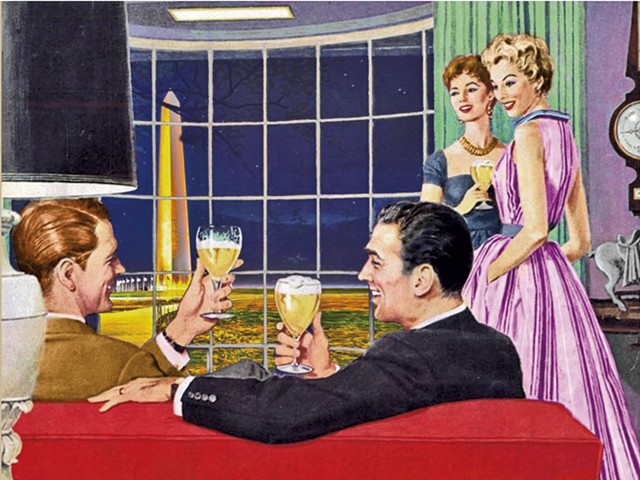 On January 28, Vermont Pride Theater at Chandler will present a script-in-hand staged reading of the award-winning play Perfect Arrangement by Topher Payne. Set in the 1950s, it tells the story of two closeted gay and lesbian couples who live out their lives masquerading as two straight couples. To the outside world, Bob and Millie are married to each other, as are Jim and Norma. But residing in adjoining apartments allows Norma and Millie to carry on their own relationship while maintaining "decent" appearances. Same goes for Jim and Bob.

As the play's title suggests, the characters have a perfect arrangement — that is, until Bob and Norma's work at the State Department brings the culture wars too close to home. Then the characters are forced to confront the lie that governs their lives.

In the same era that saw the rise of McCarthyism and the Second Red Scare, the United States also experienced the "lavender scare" — a term that refers to the mass firing and blacklisting of homosexuals from government positions. The rationale for this policy was that homosexuality could be used to blackmail employees into giving up government secrets. Known homosexuals were not regranted security clearance until President Bill Clinton lifted the ban in 1995.

In Payne's play, Bob is tasked first with weeding communists out of his department, and then with extracting gays. At the time, being outed in this way meant not only losing one's job but becoming a pariah in polite society. Jim worries that he will never be able to work as a teacher again. As director Jeanne Beckwith puts it, "The play is a great deal of fun, but then it hits you between the eyes with the seriousness and the plight of their situation."

Perfect Arrangement is written in a stylized spirit that deliberately evokes a vintage sitcom. Stage directions describe the set as reminiscent of "I Love Lucy." The characters occasionally even voice product placements, such as "Foster's Furniture Crème! It gives a glorious sheen without waxy residue and cut my cleaning time in half!" They also use the words "dyke" and "fag" fairly casually, sometimes with the air of teenagers testing them out for the first time. The play embraces mime, slapstick and even eavesdropping from the closet.

While Payne's stylization evokes audience nostalgia for the 1950s, Beckwith suggests, it's also a way for the characters to distract one another from the major problem in their otherwise "perfect" lives. And that's a problem many of us are not nostalgic for. "When we talk today about making America 'great' again, we're looking to restore this world," Beckwith asserts. "But it would actually be a landslide backwards to when a great number of Americans did not enjoy the rights and equality that they do today."

Reminding us of that danger is part of the mission of Vermont Pride Theater, suggests cofounder Sharon Rives, reflecting on the genesis of her organization in a phone interview. "In 2011, when civil unions were being voted on across Vermont, [Randolph] was really full of hate and anger," she recalls. "There were 'Take Back Vermont' signs everywhere, and all the legislators who voted for civil unions were thrown out of office in the next election. So we wanted to use theater to educate everyone and build bridges in the community."

When Perfect Arrangement debuted off-Broadway in 2014, its subject matter was timely: Same-sex marriage was a year away from being federally recognized by the Supreme Court, and gender identity was at the forefront of American politics. But Beckwith argues that the play is even more relevant after Donald Trump's election. During rehearsal, Martin Niemöller's famous poem about the spread of persecution, "First they came...," became a watchword for the production.

"We don't know where the witch hunt stops," Beckwith explains. "When there's such a narrow definition of what is right and normal, you never know when you'll be considered deviant."

On January 9, Secretary of State John Kerry issued a formal apology on behalf of the U.S. government for its role in discriminating against LGBT individuals. He said, "These actions were wrong then, just as they would be today." The timing of the apology is coincidental, but Rives took it as a small victory for LGBTQ rights. She notes, "We feel like things have been improving. Last summer [Vermont Pride Theater was] invited to march in the July 4 parade!"

Her excitement dissipates as she remembers what happened next: "But the large rainbow banners were ripped down and destroyed. So there's still work to be done."