Vermont Politics: From the People's Republic of Burlington to "Montpeculiar" 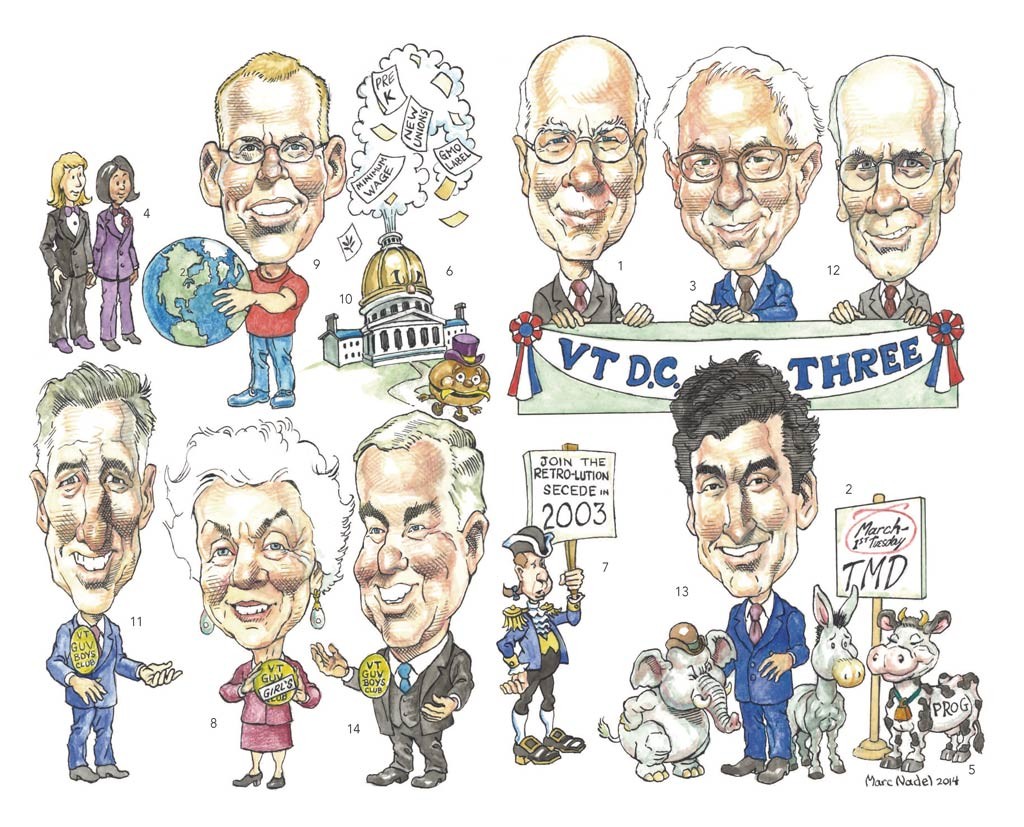 When outsiders think of Vermont politics, the first word that comes to mind is "liberal." They have a point. In January 2014, Gallup found that a higher percentage of Vermonters describe themselves as liberal — 32.4 percent — than residents of any other state.

It wasn't always this way. The Green Mountain State has a long and proud history of Yankee conservatism. Heck, Vermont and Maine were the only two states that never backed Franklin Delano Roosevelt inany of his four presidential races. As recently as 2010, our governor was a Republican: Jim Douglas, now an "executive-in-residence" at Middlebury College. Good work if you can get it!

But these days, the Vermont Republican Party is in a tailspin. Democrats hold wide margins in the legislature and every statewide office except lieutenant governor. And the even-leftier Vermont Progressive Party is on the move.

What else do you need to know about Vermont politics? Here are a few key characters, events and traditions to help in navigating your way to the voting booth. Vermont's next general election is November 4, 2014, and its next Town Meeting Day is March 3, 2015.

BTW, if you're attending college in Vermont, you're legally entitled to vote here. Just don't try to vote back home, too. That would be voter fraud. To register, drop by Burlington City Hall or the Department of Motor Vehicles and bring valid ID and proof of residency (a utility bill or bank statement will do the trick). For more details, visit: www.sec.state.vt.us/elections.aspx

Third in line to the presidency, the U.S. Senate's most senior member — and the eighth-longest serving senator in history — is still a spry 74 years old. More importantly, the Montpelier native and Senate Judiciary Committee chairman has appeared in four Batman movies.

In Vermont, direct democracy lives. On the first Tuesday of March, residents of many towns still gather to publicly debate and vote on the local budget. And, man, those fights about replacing the highway department's road grader can get heated! But not in Burlington. Queen City residents go to the polls on TMD, just like they do in November.

Vermont's own Brooklyn-born, self-described Democratic Socialist won just 2 percent of the vote in his first run for statewide office in 1972. How times have changed! These days, Vermont's junior senator cruises easily to re-election. He's so well known, most refer to him simply as "Bernie." Nowhere is that more true than in Burlington, where he won the 1981 mayoral election by a scant 10 votes and went on to serve four terms. A longtime independent — since he left the Liberty Union Party in the '70s — Sanders has been talking up a run for president in 2016, perhaps in a Democratic primary against Hillary Clinton.

Before gay marriage was a thing, Vermont invented the civil union. The legislature created the new designation in 2000, after the Vermont Supreme Court ruled that same-sex couples were entitled to the same benefits and protections as hetero ones. The backlash was fierce, and Democrats lost control of the Vermont House in the 2000 elections. But just nine years later, Vermont became the fourth state to legalize gay marriage, and the first to do so voluntarily, without a court mandate.

Ds and Rs aren't the only political parties in the 802. Vermont boasts the most successful third party in the nation: the lefty Vermont Progressive Party. It emerged out of Sanders' mayoral campaigns, though, curiously, Vermont's most famous lower-case-p progressive politician has never been a Prog. The party sent its first representatives to the legislature in the 1990s and now counts eight legislators as members.

Vermont's capital city barely qualifies as one. The smallest state capital in the country, Montpelier is also the only one without a McDonald's, for what that's worth. Pronounced "Mont-PEEL-ee-er," and rightfully nicknamed "Montpeculiar," the city of 7,855 boasts the golden dome of the Vermont Statehouse and a vibrant bar and restaurant scene. But steer clear from January through early May, when the state's part-time legislature is in session, taking up parking spaces and bar stools all over town.

Vermonters tend to love Vermont — sometimes a little too much. Founded in 2003, the Second Vermont Republic was a loosely knit group of liberals who hoped to secede from the United States. The first Vermont Republic, in case you were wondering, existed from 1777 until 1791, when it finally joined the union. Secessionists issued a few declarations and fielded candidates for state office, but the movement has been a lot quieter in the Obama era.

In 1984, Swiss-born Madeleine May Kunin became the first female governor of Vermont. But the state has elected precisely zero female governors since — and it's never sent a woman to Washington. Beth Pearce, the state treasurer, is the only female statewide officeholder. And while women are fairly well represented in the Vermont House, they remain a distinct minority in the Vermont Senate. Meanwhile, next door, "conservative" New Hampshire's got us way beat. In 2012, the Granite State elected a female governor and an all-X-chromosome congressional delegation.

One of the nation's — nay, the world's — leading climate-change activists lives just down the road from Burlington, in Ripton, and teaches at Middlebury College. In 1989, the former New Yorker writer penned what many consider the first popular tome on climate change, The End of Nature. When he's not busy getting arrested outside the White House, McKibben heads 350.org, a climate-change action group with an office in downtown Burlington.

Vermont's pint-size state legislature racked up a number of key liberal accomplishments in the two-year "biennium" ending in May 2014. It raised the minimum wage, required universal pre-kindergarten, decriminalized pot, allowed noncitizens to drive, mandated the labeling of genetically modified food, legalized assisted suicide and allowed childcare and home-care workers to unionize. So what do liberal legislators have left to do in 2015? Oh, y'know, just create the nation's first single-payer health care system. wg

Vermont's socially liberal and fiscally moderate governor faces reelection this fall — though no incumbent governor has lost since 1962. So, yeah, it's not likely to be a nailbiter.

This Democrat is Vermont's lone congressional representative. In a related story, Vermont is small.

He's a Democrat, the mayor of Burlington and a member of a local men's baseball league with famed Red Sox pitcher Bill "the Spaceman" Lee.

The former governor of Vermont came within a scream of the Democratic presidential nomination in 2004. He still lives in Burlington, where his "Democracy for America" political organization is based. You may bump into him riding the bike path he championed back in the 1970s.