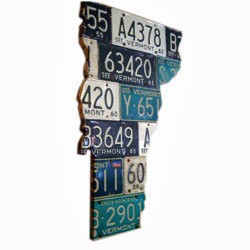 Regulars at Handy’s Lunch in Burlington have probably noticed that its “artwork” consists mainly of sports photographs — frozen moments in hockey, basketball, golf, etc. — on the walls surrounding the U-shaped counter. A new sculpture by Burlington artist Aaron Stein joined the photos last week, and, unless you ask Earl Handy about it, you might not guess its significance. The roughly 3-foot-high piece in the shape of Vermont is made from old license plates — Stein’s signature medium. These particular plates were once affixed to cars belonging to Handy’s late father, Robert Handy, in the years 1954 to ’81.

Before 1967, Stein says, car owners got a whole new plate every year, not just a sticker indicating they’d renewed their registration. The sculpture also reveals the state’s experimentation with colors: There are white plates, black plates and two shades of green. Handy says his dad’s old plates were collecting dust in the garage when he decided to turn them over to Stein. “I always remember seeing the plates, ’cause my dad liked them,” he says. “He had them nailed to the wall in chronological order.

“It’s so great to have this memento of my family,” Handy says, noting that his mother, Janet, who also works at the 65-year-old, family-owned diner, has been trying to remember all the cars each plate adorned. “A lot of people have said how nice it looks,” Handy adds. “And some of my customers who are Red Sox fans are happy not to see my Yankees jersey [on the wall] anymore.”

Handy also commissioned bracelets fashioned from license plates — Stein calls them Tuff Cuffs — for himself, his wife, Alexis, and their twins, Genevieve and Nicholas. That is, for when the almost-3-year-olds turn 16. “That way, their first license plates will be ones that belonged to my dad,” Handy says. “We’ll all have a piece of my father’s legacy.”