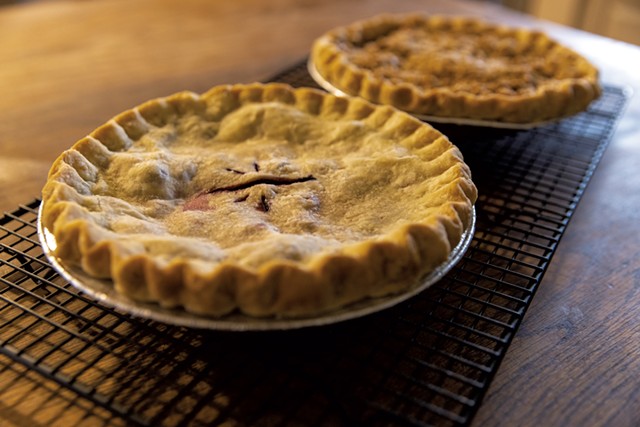 When I discovered Poorhouse Pies, I knew moving to Vermont was the right decision. I couldn't figure out which I loved more — the pies themselves or the experience of buying them on the honor system. Stopping on a quiet road in Underhill, where the bakers kept their rustic self-serve shed, I and other customers dropped cash in a locked box and selected from about a dozen fillings.

When Poorhouse's owners sold the business last November, I panicked. As it turns out, Poorhouse's homespun distribution method lives on, albeit in a newly built vestibule of the bakery's new quarters.

Meanwhile, another pie shed has popped up in Grand Isle, where DonnaSue Bakes+Cooks gives locals and tourists a place to feed their cravings with pastries, along with a dollop of Vermont goodwill.

A third newcomer to the pie scene, Isabelle Mae's Pie Emporium, can be found at the Winooski Farmers Market. Specializing in seasonal fruit varieties, the business sells five-inch pies — ideal for singles or couples — with full-size versions available by preorder.

All of these bakers have forgone the traditional storefront and pastry case to forge a closer bond with their customers. Of all desserts, they said, pie comes most from a place of love, evoking a connection to the comforts of home and family.

I visited the three bakers for pie to soothe my soul, as well as placate my palate. 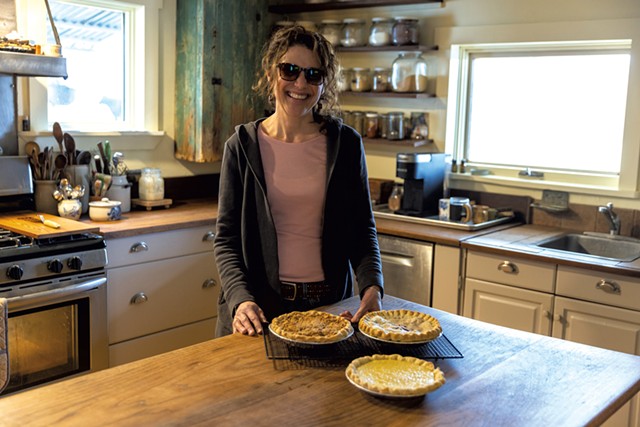 The shed in front of DonnaSue Shaw's home says it all in large, square-framed letters: P.I.E. If that doesn't make a lover of sweets hit the brakes, nothing will.

Inside the shed, which once housed chickens and geese, Shaw keeps her tiny shop well stocked with cookies, brownies and her signature GoTo granola bars. On the day I visited, it also offered chocolate chip pumpkin bread, whoopie pies, carrot cake cookies sandwiched around cream cheese filling, and chocolate cream and apple pies. A freezer holds sweet and savory pies for customers to bake at home.

"It's just wonderful interacting with the people who stop by." DonnaSue Shaw tweet this

Pies cost $15, and visitors are encouraged to write their names and purchases on a clipboard. Cash goes into a red birdhouse on the wall; underneath, credit card users find the QR code for the baker's Venmo account. Under a mason jar, a small pile of $1 and $5 bills facilitates making change.

I tried the Chocolate Dream pie, embellished with three flower-shaped rounds of crust, providing the crunch and crumble of a shortbread cookie without too much sweetness. It was a nice offset to the rich, dark-chocolate filling, more like pudding than mousse — decadent in flavor, but still light enough that I didn't feel like I overindulged.

Shaw's family has loved her pies and other treats for years. The South Hero native married a fellow Champlain Islander and raised four sons on their property, with extended family nearby.

In summer 2019, Shaw and her niece brought her goodies to the Champlain Islands Farmers Market. The booth was so busy that she added the shed the following year. She intended to continue at the market, but pandemic restrictions made it too challenging. Now, the shed is the only DonnaSue source.

In the shed, pie sales are unpredictable, Shaw said. One of her family's favorites is Innkeeper's pie, with a slab of fudgy chocolate on the bottom, a cakey biscuit layer on top and a customary garnish of whipped cream. Shed customers didn't want it, Shaw said.

"I learned pretty quickly that people like what's familiar," she said. "People know what a blueberry pie is."

That hasn't stopped Shaw from experimenting with a butterscotch-pear pie in the fall and adding apple to the traditional strawberry-rhubarb for a Strapplebarb pie. When I stopped by, her popular Multiberry — blueberry, black raspberry and strawberry — had already sold out.

DonnaSue's shed stays open Thursday through Saturday during the winter to serve the island locals. Some days, everything sells out quickly, Shaw said. Other days, the birdhouse holds a mere $20. Leftovers usually go to the construction crew building a new bridge just past the shed on Route 2.

Still, Shaw considers it worth her while to keep the shed stocked. She recalled a customer from California who flagged her down to marvel that customers can pay on trust.

"It's just wonderful interacting with the people who stop by," she said. "And having the goods to spread the love around."

A Pie for All Seasons

Growing up in southern Maine, Jess Taylor learned to bake pies from her grandmother, Isabelle Mae. "She had a huge garden," Taylor recalled. "She would go down and get fiddleheads by the river and pick berries."

As a teen, Taylor moved with her family to Essex. Now 36, she lives in Winooski, where she holds on to her family's tradition of cooking with local, seasonal ingredients.

In 2019, when Taylor was struggling with personal and health difficulties, pies helped her cope with the isolation, she said: "I went immediately to baking, because it was such a comfort."

She gave her pies away to friends. When one kept insisting on paying her, Taylor wondered whether her self-care efforts might have broader appeal.

Last year, she set up a table at the Sunday Winooski Farmers Market. She brought 50 pies and sold out in an hour. Her mother stepped up to help her produce 70 to 100 pies for subsequent markets. This year, Taylor's small pies will cost $11, a slight increase to account for more expensive ingredients, she said.

"This is the way I can connect with people again and become a part of the community that I had moved to," she said.

Taylor made connections beyond her devoted customers. Fellow market vendors suggested techniques for table display and waste management. Other bakers gave her tips, such as to make batches of dough ahead of time and freeze them.

Those connections also opened up a new world of fruit. At the Lalumiere Farmstand and Greenhouse booth, Taylor learned that rhubarb grows locally through October, extending her strawberry-rhubarb season. A friend with a mulberry tree inspired a mulberry-lime pie. Last summer, Taylor picked Montmorency cherries in Shelburne, and they went over big at the market. A customer offered Taylor the sour cherries growing on her property — and received a thank-you pie.

"I thought I already knew the fruit cycles, but there was so much more to it," Taylor said.

I tried an Isabelle Mae's salted caramel apple pie (full size $25) with a crisp, flaky crust dusted with sugar crystals. The fruit in the cinnamon-tinged filling still had a bit of bite. The caramel added only a hint of sweetness, barely discernible against the tart apples. Taylor told me she uses as many as seven apple varieties in a single pie.

Though fruit is Taylor's specialty, she has expanded into cream pies. Two unrelated customers have requested pistachio pie, which she plans to try this year.

The baker has developed theories about crust. "The butter has to be very, very cold," she said. And she has a precise rolling technique: "Start in the middle. Don't over-roll. Don't do it more than twice." Excess rolling changes the texture, she said: "It's not as tender, and it won't be as flaky."

Isabelle Mae's will ramp up again when the market reopens at the end of May. In the meantime, Taylor has been baking special orders. During tax season, she sets pies aside to handle the workload in her other job as an accountant, but she'll exchange spreadsheets for sweets again as warm weather arrives.

For new Poorhouse Pies owner Suzanne Tomlinson and her cobaker, Jocelyn Kramer, pie is all about the crust. They both favor butter crusts, though Kramer baked with Crisco in the past, and her grandmother used old-fashioned lard for the signature flakiness.

Nonetheless, Poorhouse recently switched from using butter to a high-quality non-hydrogenated shortening. Butter has water in it, Tomlinson explained, which can cause the dough to "shrink" and change shape as it bakes.

"I feel good about the thing I'm making, and I want people to feel like there's still some humanity left." Suzanne Tomlinson tweet this

Tomlinson had never baked a pie before she bought Poorhouse from founders Jamie and Paula Eisenberg, who wanted to retire. A veteran of restaurant kitchens on both coasts, Tomlinson returned to Vermont in 2012 with plans to open her own restaurant. She was scouting spaces when Jamie persuaded her to turn the building she had found into Poorhouse's new home.

"I like the fact that you can put anything in a pie," Tomlinson said during a recent lunch break at the bakery. "I like the variety. I love the smell. I love the feel of it on my hands."

And she respects the strict rules of the pastry. "Pie laws," she calls them. "Pie runs you," she said. "You cannot run pie."

Tomlinson embraced the Poorhouse honor system. Her contractor husband, Jon LeBlanc, built a makeshift shed onto the front of the bakery building. The old door of the original Poorhouse shop, its wooden slats painted colorfully with the names of daily pie selections, stands at the entrance. Inside the shed, Tomlinson, who has become somewhat obsessed with pie, hung a poster outlining the pastry's history.

Customers can watch the pie-baking action through a shed window. They can leave cash or pay with a credit card on an iPad on the counter.

For Tomlinson, the system carries the message "that we can still maybe trust each other," she said. "I feel good about the thing I'm making, and I want people to feel like there's still some humanity left."

Poorhouse bakes 30 varieties daily and usually sells out of 100 pies by afternoon. This year on Super Bowl Sunday, the day before Valentine's Day, the bakery sold 120 pies in 28 minutes. Traffic backed up along Route 15, Kramer recalled.

The bakery's three full-time and four part-time employees, plus Tomlinson, concoct special pies weekly. One of their latest creations looks like an Easter basket, with chocolate filling, a frothy topping of whipped cream, and green-dyed shredded coconut in the center, where pastel Cadbury chocolate eggs are nestled.

On my visit, I picked raspberry-peach with an oat-crumble top and a full-crusted apple-strawberry pie. In each, the fruit popped with flavor. Though I typically prefer the flaky, buttery full crust, the raspberry zing married well with the crispy oat topping.

Next time, I may get a T-shirt with the Poorhouse motto: "Pie fixes everything." I couldn't agree more.