Vermont Pianist Looks Forward to a Larger Audience ... in China 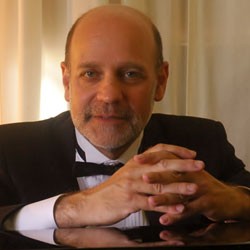 Since moving to Vermont in 1996, Shelburne pianist Paul Orgel has become something of a fixture in the state’s classical scene. He performs regularly, both live and on Vermont Public Radio. He teaches in the Green Mountain Chamber Music Festival and as an affiliate artist at the University of Vermont; his private students tend to be the area’s most advanced. Orgel also helps organize concert series at both St. Michael’s College and UVM that pair music with other topics in the humanities, such as literature.

Recently, though, Orgel has been lured away from Vermont’s small, but nonetheless vibrant, classical-music scene to a place on the opposite end of the scale: China. This weekend, he’ll give a solo recital previewing his October concert tour of two cities in southeastern China.

Orgel first performed in that “thrilling” country in 2010, during a trip to attend the wedding of a former student. He gave three concerts arranged by families of his students, most of whom are Chinese American. This time, with that same former student now acting as his manager, Orgel will perform and offer master classes in Xiamen — in a 600-seat, state-of-the-art concert hall — and in Nanjing, the country’s fourth-largest city.

It’s not just China’s bigger audiences that appeal to this nuanced performer.

“There’s a different audience around classical music there,” Orgel observes. “China’s growing middle and upper classes want their children to appreciate Western classical music.” As a result, he says, “a lot of young people” attended his concerts.

By comparison, he adds, in America, that kind of energy around classical music is “not a growing part of our culture.” Neither is it a waning one, though; Orgel has noticed “it’s being given new life by Asians in the U.S.”

Orgel’s trip to China is part of a larger plan to “keep growing and setting new goals” as a musician, he says. He doesn’t speak Chinese — the 56-year-old insists he’s too old to learn — but no matter: The Schubert, Dvorák, Chopin and Weber pieces he’ll play need no translation.

The concert opens with Schubert’s Sonata No. 21 in B-flat, written a few weeks before the composer died at the age of 31. “It’s very possibly my favorite piece of piano music,” says Orgel. It’s also long, but “you wouldn’t want to cut it,” he adds, citing composer and critic Robert Schumann’s description of the piece as having “a heavenly length.”

Next follow two mazurkas and a waltz by Dvorák, selected partly in tribute to the Czech heritage Orgel shares with the composer. Dvorák is better known for his symphonies; his piano music is “hardly ever played,” says the pianist, though he deems it on a par with Chopin’s.

Orgel chose Chopin’s Barcarolle because “it’s one of those pieces that make people who like it swoon at the idea of it.”

The program ends with two virtuosic pieces by Carl Maria von Weber, the work of whom Orgel is reviving; the composer was most popular in the first half of the 20th century.

When Orgel finishes chatting about his program choices and sits down at the UVM Recital Hall piano to rehearse, any talk about the pieces seems immaterial compared to hearing them. Placing his fingers on the keys, he pauses for a moment. “It’s hard to start,” he says quietly into the nearly empty space. Then he delves into the Schubert sonata’s opening movement and its theme — sublime, almost yearning, and indifferent to national boundaries.