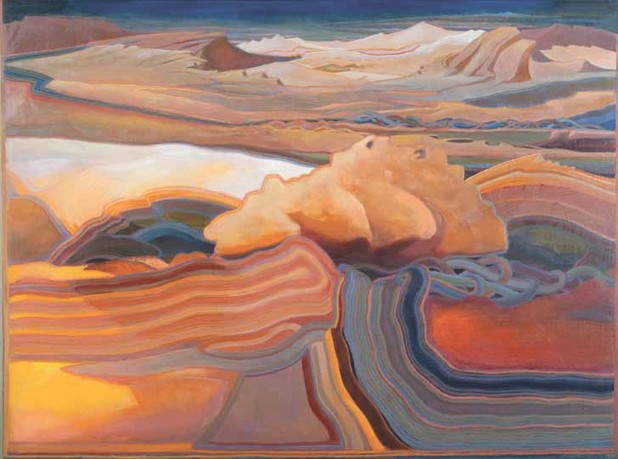 Only a few Vermont artists are invited to display their work at high-end Manhattan galleries. So it’s noteworthy that two painters — one from Burlington, the other a part-time resident of Middletown Springs — now have shows running simultaneously at prestigious venues in Midtown and Chelsea. Valerie Hird’s “The Fifth Day” is hanging at the Nohra Haime Gallery on Fifth Avenue through March 10. Janet Fish is showing a dozen works at the DC Moore Gallery on West 22nd Street through March 17.

The two spaces typify the art precincts in which they’re located. Nohra Haime has an air of established elegance accentuated by Persian rugs, while DC Moore has the white-box, minimalist look shared by most galleries in a neighborhood that a decade ago emerged as the art world’s capital of hipness. Fish’s show dominates the Chelsea gallery, although she does have some august company in an adjoining room: visionary watercolorist Charles Burchfield (1893-1967), who was the subject of a retrospective last year at the Whitney Museum of American Art.

What the two galleries have in common are the prices they charge for the works on their walls. One of Fish’s pieces is selling for $150,000; a suite of 12 paintings by Hird goes for $120,000. One of the least expensive works in either of the shows is a small Hird painting that someone has bought for about $3000.

The two sets of works are dissimilar stylistically, although both artists are traditionalists in that they paint recognizable images on canvas.

Fish’s riotously colorful renderings of table settings might be referred to as still-lifes, except there’s nothing still about them. “The real structure of a painting comes from the movement of color over the surface,” the artist has said. That approach is most charmingly evident in “Monkey Business,” which shows a red vase with gladiolas that’s been knocked onto its side, a listing pineapple beside a green pitcher with a floral pattern and glass shards of a blue bowl — all atop a multicolored tablecloth. The tail and hind legs of a monkey can be seen exiting stage left.

Hird entitled her series “The Fifth Day” in reference to the biblical creation story. She’s paused it at the point prior to the inception of the human species. The show therefore includes no figures, but presents depictions of the four elements: earth, wind, water and fire.

Hird’s ambition here, she says, is nothing less than the visual articulation of “a new mythology” that combines symbols and artistic expressions of Eastern and Western civilizations. The desert palette of hot pinks and sandy browns mainly used in executing these works can be traced to the many years Hird spent traveling through the Middle East and central Asia in the company of nomads.

Vermont is a long way from Uzbekistan, which Hird recently visited, but the classic silhouette of the Green Mountains makes an unmistakable appearance in many of her paintings at Nohra Haime. The artist is unfazed when that association is suggested to her. “It would be surprising if there weren’t some trace of Vermont in my work,” says Hird, who’s lived in the state since 1979. “The Green Mountains are pretty much hardwired into my consciousness.”