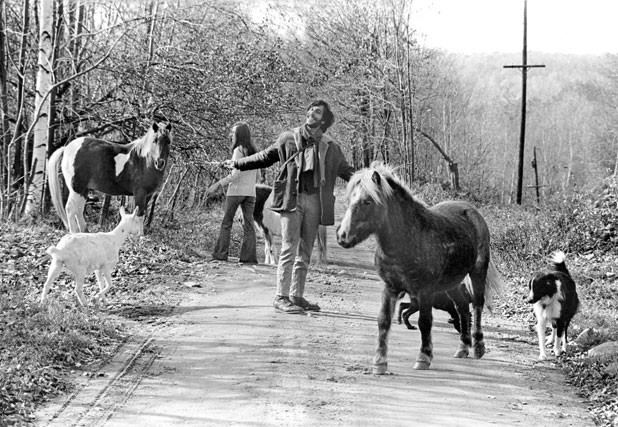 What do you get when you ask about 20 filmmakers to collaborate on documenting the political and cultural legacy of their state? In a worst-case scenario, chaos.

But Freedom & Unity: The Vermont Movie, a group project spearheaded and produced by Norwich’s Nora Jacobson, seems to be clicking along. Last Saturday night, at a FlynnSpace reception organized to raise funds for editing the film, Warren filmmaker Dorothy Tod suggested that Freedom & Unity’s tentative title was its guiding principle, too. After Jacobson recruited them for the project, “we were all unleashed onto the Vermont landscape to see what speaks to us,” she said.

That was the “freedom” part. In Tod’s case, it meant examining the role of water in Vermont’s history, especially in the lives of the Abenaki. And now, she noted wryly, Jacobson needs to take the disparate pieces and “make a unity out of it all.”

The crowd of about 30 got a sneak peek at some of those pieces on Saturday. A clip of a local Alcoholics Anonymous meeting — with animated cartoon heads replacing the participants’ faces — came from a segment by Orly Yadin and Eleanor Bobbie Lanahan. (AA was founded by two Vermonters, they pointed out, and may have been modeled on town meetings.) Louise Michaels of Shelburne talked about her piece chronicling Barre’s workers’ movement, an island of immigrant socialists in a “sea of Yankees.”

Rick Moulton of Huntington provided another perspective. When he joined the project, “Vermont was coming across [in the movie] as this state of left-of-center people,” he explained. “I thought, This isn’t the state I grew up in.” Moulton’s segment explores Vermont’s long allegiance to George Aiken’s kinder, gentler breed of Republicans.

Among the other collaborating filmmakers who came to the reception were Jill Vickers and Rob Koier of Burlington. Holly Stadtler of Richmond, a former Discovery Channel producer who exec-produced the 2008 indie documentary Finding Our Voices, talked about her segment on the recent fight for water rights in East Montpelier.

If nothing else, The Vermont Movie should give viewers a sense of the breadth of Vermont experience — and Vermont filmmaking, ranging from narrative to journalism to activism. Jay Craven, John O’Brien, Kenneth Peck, Nat Winthrop and Robin Lloyd are among the others involved.

“It’s been great for me to be a part of freedom, unity and insanity,” Vickers noted. Amen to that.

‘The Vermont Movie’ Summer Concert No. 4

With Rachael Rice and the Cosmic Americans and the Eames Brothers Band. Friday, July 30, at 6 p.m. at the Taste of Stowe Arts Festival, Topnotch Field, Mountain Road, Stowe. $20; $10 for kids under 16. Info, 425-3399. thevermontmovie.com