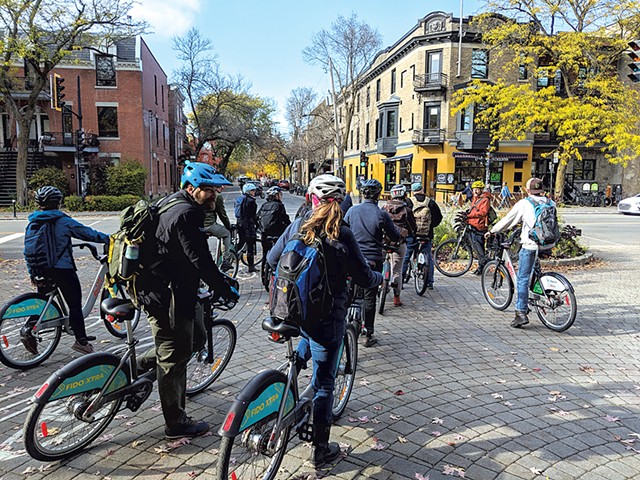 Twenty cyclists careened down a paved pathway under a canopy of yellow foliage last Friday. In a parade-like procession, the riders pedaled over speed bumps and past a fountain and a pond, drawing attention from locals in Montréal's Parc La Fontaine.

"Bixi boys, Bixi ladies!" a man riding a red moped exclaimed in a thick Québécois accent as he motored by. "Bixi party, you Bixi posse!"

The "posse" in question included this reporter and a group of officials from Vermont, who sat astride bicycles from public bike-share program Bixi. Organized by Burlington bike enthusiasts Andrea Todd and Drew Pollack-Bruce, the group was there for an 11-mile, two-wheeled "learning journey" through the streets of Québec's largest city. In Todd's view, its transportation infrastructure is worth imitating in Vermont's largest city.

"In Burlington, I think you have to have some steel nerves to jump in traffic on a bicycle and get from point A to point B," said Todd, who rides a bike through all four seasons. Montréal, she continued, is "a northern city doing something really smart with their streets."

When it comes to Burlington's roads, officials have long struggled to balance the interests of motorists and cyclists. Drivers were outraged in 2016 when the city eliminated a vehicle travel lane on North Avenue to make way for bikes, a change one city councilor said "divided the neighborhood." The following year, the city proposed stripping 10 parking spaces from North Union Street to build a bike lane, another divisive change that was ultimately abandoned. The city instead detoured the bike lane in order to keep the parking.

While those projects garnered plenty of critics, the Montréal bike trip attracted many who already embrace alternative transportation. Nearly all of the attendees were practiced cyclists; some, including City Councilors Max Tracy (P-Ward 2) and Jack Hanson (P-East District), don't own a car. Councilor Joan Shannon (D-South District) and city parks director Cindi Wight regularly bike around Burlington. The others weren't newbs, either. Among them were employees of Burlington's parks and public works departments, an engineer from the Chittenden County Regional Planning Commission, the Vermont Agency of Transportation bike and pedestrian program manager, and a staffer from cycling advocacy group Local Motion.

The group convened at Burlington's public works garage just as the sun rose last Friday and traveled by van 95 miles north to Montréal City Hall. Across the street, the group met the day's tour guides: progressive city councilor and cycling advocate Marianne Giguère and François Gosselin, the head of public works in Le Plateau-Mont-Royal, the city's most densely populated borough.

The Montréalers soon made clear their position on bike lanes and pedestrian-friendly infrastructure: Both should be a priority, even if they eliminate precious parking spots. Since she was elected in 2013, Giguère has successfully pushed for better cycling conditions in the Canadian city, and she was proud to show the results to her Vermont visitors.

A flatbed trailer packed with Bixi bikes, courtesy of the Montréal delegation, waited nearby. Grinning happily, Todd strapped on her helmet — equipped with a camera that records 360-degree video — and offered up extra layers and gloves to her fellow bikers on the crisp fall day.

Throughout most of the ride, the group traversed two-way bike lanes that were cushioned from traffic by grassy medians, or, in some cases, plastic bollards like those on Burlington's North Union Street. The design keeps riders safe and eases snow removal, according to Gosselin. When it snows, Montréal clears bike and car lanes at the same time, to great effect: Winter bike travel increased 160 percent between 2015 and 2017, soon after the policy was implemented, he said.

While a worthy goal, some of the Queen City participants complained that it's hard to keep bike lanes clear when people push snow from their driveways right into them. Burlington plow truck driver Lorand Codrean told the Canadians that he struggles to avoid hitting bollards and cars parked on narrow streets. "What if you took off parking?" Gosselin suggested — a question the Burlington contingent responded to with laughter.

The group peddled east on Boulevard René-Lévesque, a wide street with plenty of space for bikes, cars and pedestrians, some of whom called "Bonjour!" to the passing Burlington bike parade. 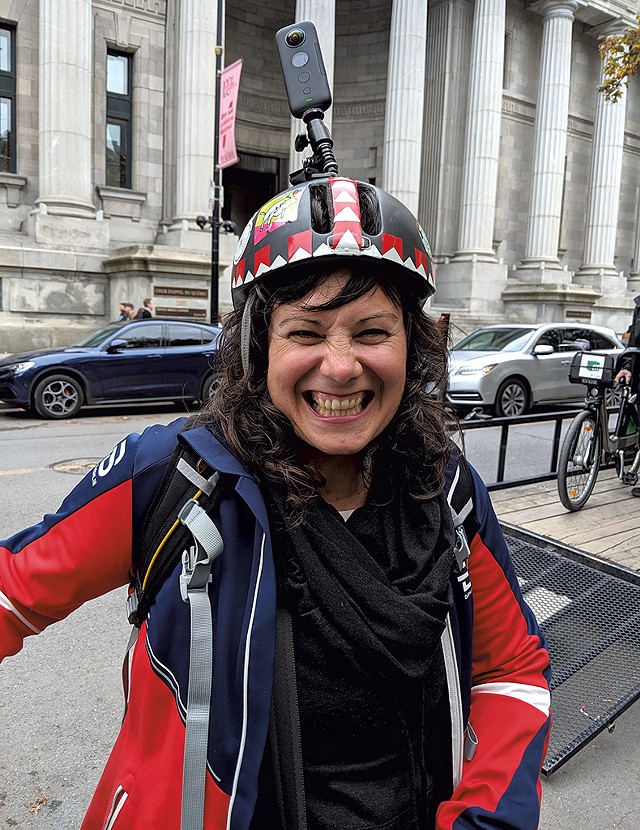 "The biggest hill is coming up!" called David Beitel, who tagged along for the ride and works for Eco-Counter, a Montréal company that monitors bike lane usage with underground sensors.

"It's not a Depot Street hill, is it?" Todd asked with a laugh, referring to Burlington's very vertical street, which connects the Old North End with the waterfront.

"If anyone needs to walk up, no shame," Beitel said.

A handful took the out, dragging the heavy Bixis up the hill into Le Plateau, the hip, artsy neighborhood northeast of downtown. The borough's brightly painted row houses gave a San Francisco vibe to an otherwise European-inspired city. The protected bike lanes were steps from residents' front stoops, many of which were decorated with pumpkins and cobwebs for Halloween.

The two groups converged at Rue de Brébeuf, in front of Vélo Québec, a bike advocacy group that is the Montréal version of Burlington's Local Motion. There, Councilor Tracy quizzed his Canadian counterpart on how local businesses react when the city removes parking spots. In the 10 years since several bike-centric campaigns began, Giguère said, the resistance has lessened because those opposed to the changes have realized "it's not killing them.

"What helps also is to show them how much parking that's left around," she added. "It takes time and a lot of talk, but it's changing."

The tour continued at a good clip as the group took only short rests to wait for traffic signals or for stragglers to catch up. The hosts showed off Montréal's "bike boulevards" — stretches that are open to cars but allow cyclists to ride down the center of the street along with them. As one might expect, drivers slow down when bikes have an equal right-of-way.

The group paused at an intersection as a pedestrian strolled by. Todd called out to him, asking what he thought of the bike boulevards.

"There's less traffic, and it's ecological," the man replied.

Two hours and many miles later, the journey started its last leg, which was, mercifully, mostly downhill. The cyclists passed a park where teenage Swedish activist Greta Thunberg captivated half a million people during last month's worldwide climate march. The climate emergency is precisely what motivates Councilor Hanson to push sustainable transportation in Burlington, he said on the van ride home. Drivers will resist proposals to remove parking, but "if we don't, the consequences are much greater than the discomfort of making that change," Hanson said.

"We don't really, in my mind, have a choice but to reinvent our streets to address climate change," he said, suggesting that if Burlington builds better bike lanes — and plows them — people will use them in place of cars.

Is that an idealistic view? Maybe. Burlington's streets are only so wide, after all. But by the day's end, the journey-goers appeared to agree that they could find some ways to emulate their neighbors to the north. As the van pulled onto Pine Street, again under the cover of darkness, there was a palpable buzz as the group debriefed about their adventure and cracked up at plow driver Codrean's tales from the road. Before the trip, Codrean said, he assumed the folks at city hall were just "obtuse politicians" who create policies that make his difficult job even harder.

"Now I see that ... there's an interest in fixing the problem the right way. And that pleases me," Codrean told the councilors. "I feel so connected with you guys, it's unreal. For me, that was the best part."

Correction, October 31, 2019: An earlier version of this story incorrectly described the plans for the North Union Street bike lane.