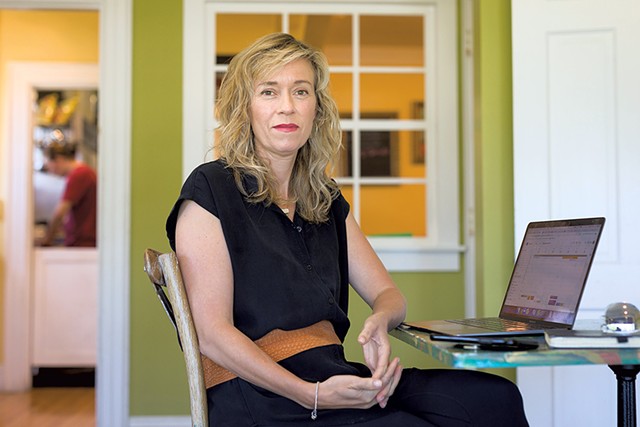 In 2003, Christina Asquith hitchhiked her way into Baghdad with an idea. She wanted to write about the Iraq War from a perspective she hadn't seen covered by news organizations: How was it affecting the education of women and girls?

"It was an amazing and interesting angle into the fall of Saddam, the rebuilding led by the U.S., the efforts to build democracy, and then the failure of all those things and the rise of the civil war," Asquith said. She met Seven Days for an interview at the Starving Artist Café in South Burlington's Davis Studio, where she was picking up her kids from summer camp.

In the years since that Baghdad assignment, Asquith has written a book (her second), become a parent and moved to Vermont. She then moved to Cambridge, Mass., to Istanbul and back to Vermont again. And she founded a nonprofit that expanded the goal she'd had when she first set foot in Iraq: to tell the stories of women and girls worldwide.

Telling those stories turned out to be pretty hard. Even after writing Sisters in War, a book that follows the lives of four Iraqi women, Asquith met resistance from media editors. They would hear her ideas and tell her, "These aren't news stories." Or they'd say, "Let's run them in March; that's Women's History Month." The things that impacted women just weren't viewed as news.

"I didn't want to be just a freelancer doing one-off pieces," Asquith said. "I wanted a whole newsroom, with the top journalists in the business all focused on doing investigations around women's issues."

In 2014, Asquith met Dr. Xanthe Scharff, a reporter who had founded a girls' education nonprofit in East Africa. Scharff had the business sense Asquith needed. Together, they realized an idea that Asquith had been brewing for a while and founded the Fuller Project for International Reporting, a nonprofit news organization dedicated to reporting on women. The Fuller Project funds correspondents around the globe to cover underreported stories on women's issues. Those stories run in news outlets internationally.

"She has just an astounding sense of vision for reporting," Scharff said of Asquith in a phone interview. "As partners, we have skill sets that set us up very well for our different roles in the organization."

Today, the Fuller Project employs five full-time journalists and four contractors. In the beginning, however, Asquith and Scharff had no money. They produced their first byline in the New York Times in 2015, but it took three years for the two of them to receive a salary.

"ProPublica, which is a groundbreaking, incredible nonprofit news organization and has paved the way and has been so generous in mentoring us, started, by comparison, with $10 million," Asquith said. "And they deserve every accolade they have gotten. But to be clear, we did not start with $10 million."

Where they started was with a three-page proposal written by Asquith, which she first showed to potential funders in the Cambridge, Mass., home of Swanee Hunt, a former U.S. ambassador. Hunt is only one of the notable women who has helped or worked with the Fuller Project along the way. There's Sophia Jones, the organization's first hire, whom Asquith described as "an intrepid 24-year-old war correspondent." There's Meredith Kopit Levien, executive vice president and chief operating officer at the New York Times, whose home Asquith visited the night before her Seven Days interview to meet with other prominent women in media.

And then there's the organization's namesake, Margaret Fuller, a journalist and women's rights advocate from the 1800s. Fuller worked at the New York Tribune as a book reviewer and foreign correspondent and wrote one of the U.S.'s first major feminist books. She would gather groups in her house to discuss issues such as women's suffrage and education. She was the first woman allowed to use the Harvard College library.

When Asquith was first starting the Fuller Project, she had young kids and was unsure just how big she could dream. Then she read a biography on Fuller.

"I was like, Oh, my God," Asquith said. "Margaret Fuller was doing this groundbreaking reporting as a woman in 1840. And here I am, afraid of my little idea. I felt so inspired by her."

According to the organization's financial documents, in 2018 the Fuller Project received more than $1 million in contributions. Funders include Craig Newmark Philanthropies — founded by the inventor of Craigslist — Humanity United and the European Journalism Centre.

"I think that philanthropists should, when they consider a portfolio of initiatives that support democracy in this country ... absolutely include journalism," Asquith said. "I think the case has been made for journalism by ProPublica. So now we're making the case for women."

Nonprofit investigative journalism is on the rise, according to the Institute for Nonprofit News. "Until 10 years ago, nonprofit news was generally mentioned as a footnote on the tax status of a few dozen investigative news outlets," reads the organization's 2018 industry report. "Today, the U.S. has more than 200 nonprofit newsrooms and growth is accelerating." In 2018, three quarters of these organizations were 10 years old or younger.

To date, the Fuller Project has published stories in news outlets as prestigious as the Atlantic and the New Yorker, as well as smaller daily newspapers such as the Montgomery Advertiser in Montgomery, Ala. It recently started an East Africa bureau within the newsroom of the Daily Nation, the largest newspaper in Kenya. There, two Fuller Project reporters and three from the Daily Nation are forming a team dedicated to reporting on gender issues, which Asquith said is unprecedented on the continent.

The rest of the Fuller Project staff is equally scattered. Asquith lives in Charlotte, and Scharff is in Washington, D.C. They have correspondents based in the Philippines, Istanbul and Philadelphia.

"I do not want to be a news organization with people sitting in East Coast big cities aggregating content," Asquith said. "We are literally on the front lines."

Recently, Fuller Project reporter Corinne Redfern spent months following sex workers in Bangladesh brothels, where up to 10,000 women live. Asquith said Redfern would spend days hanging around the area before even taking out her notebook. It was sometimes months before the sex workers started to open up to her. She published stories about the brothels in the Telegraph, Elle and the Guardian.

One such story follows a girl who gave birth to her first child at age 12 and then was sold into sexual slavery. The story won an Amnesty International UK Media Award in 2019. Another story reported that brothels have constructed graveyards because so many women there are killing themselves.

Asquith said reporting on these kinds of stories can cost an organization $300,000. Most news outlets don't have the resources; it has to be done through philanthropy, she said. And the Fuller Project, freed from daily deadlines and the need to cover breaking news, can invest.

"We take that freedom seriously in that we really want to do journalism that has impact and drives the conversation around women's issues and changes the way people think," she said.

Living in Vermont with her husband, Jack Fairweather, who's also a former war correspondent and author, has inspired Asquith to report more on women's issues in rural communities. The Fuller Project is growing its U.S. staff and working to make sure that women are covering their own communities — like in Philadelphia, where a staff correspondent is training and working with a reporter from the city to cover stories that matter to its residents.

"We envision a 21st century where we will see gender equality, and we want to be part of that movement," Asquith said. "We've seen all sorts of social movements over the centuries, and we think the 21st century is going to be about gender equality around the world. We really want to be a force behind that ... That's the whole point of journalism, right? Sunlight is the best disinfectant."