Vermont Musicians Share the Stories Behind Their Wedding Songs 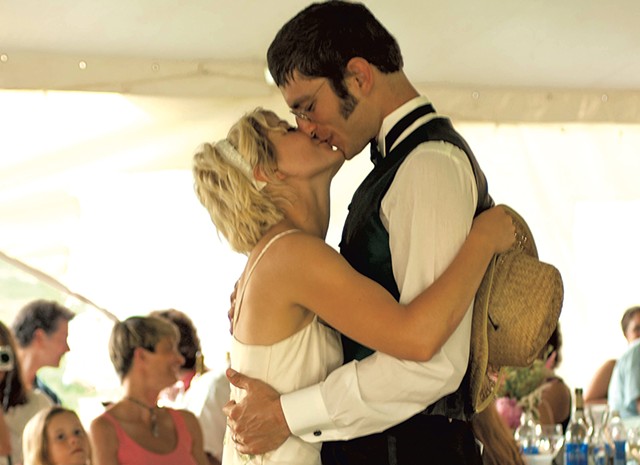 Getting married involves the biggest decision of your life. No, we don't mean choosing a spouse. We're talking about choosing the song that will introduce you and your partner as a single entity to the world: the wedding song. Unlike roughly half of all marriages, your first song is forever. So, the pressure is on to get it right. Right?

Seven Days recently polled some musical couples who are either married or about to be. We wanted to find out how and why they chose their first-dance songs, and maybe to pass along advice for anxious couples grappling with these same questions: Classic or obscure? Earnest or whimsical? Elegant jazz or ear-splitting metal?

Here's what they told us.

When they first fell in love, folk songwriter Anaïs Mitchell and Noah Hahn shared a mutual love for Gram Parsons. So much so that a lyric from "Hearts on Fire," his duet with Emmylou Harris, became part of their coupley lexicon.

Eventually, Mitchell got a tattoo of a flaming heart with Hahn's name on it. "This was before we were married," she explains. "My mom was like, 'Whoa, you're serious about him.'" She was. Hahn and Mitchell married in 2006.

As in Mitchell's own music, an undercurrent of melancholy runs beneath the sweetness of Parsons' tune.

"The weird thing about it is that the lyrics of that song are super dark: 'My love for you brought only misery,'" says Mitchell. "But we sort of felt like, Fuck it, it's a great song. And it was meaningful to us," she continues. "And we're still married 10 years later, so it didn't seem to curse our union."

Mitchell advises soon-to-be-wed couples to choose a song that's genuinely meaningful to them, rather than what "might feel cool or clever or sentimental" to others.

"Let's face it, much of the wedding is about pleasing other people," she says. "So it's nice to get three-and-a-half minutes of real, epic intimacy you can dance away in."

Colleen and Alex Budney subscribe to Mitchell's advice. While on vacation early in their relationship, they listened to Old and in the Way's version of the Rolling Stones classic "Wild Horses" on repeat late at night. (Coincidentally, Gram Parsons also recorded the tune.) Naturally, the couple chose it for their first dance when they were married last year.

"We had a kickass band consisting of Steve Hadeka, Bob Wagner, Walker Davis Allen, Mike Fried and Josh Weinstein play our wedding party, and they did a version that leans more Stones, which we love equally as much!" says Alex, who is a bassist for the Seth Yacovone Band. He's also a partner in Nectar's Entertainment Group, which owns Burlington nightclubs Nectar's and Club Metronome. His advice for new couples is short and sweet: "Don't overthink it." 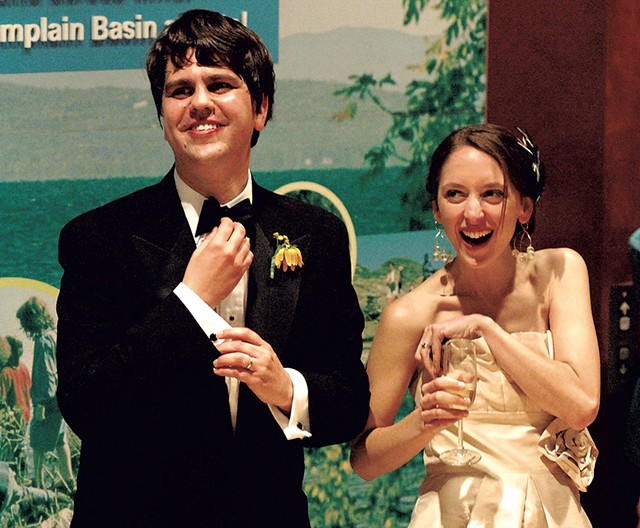 "We both love the Trembling Blue Stars," says the Smittens' David Zacharis. "They were our band when we first got together." He adds that he and lifemate/bandmate Holly Chagnon also both love the Free Design, who originally performed their first dance song, "I Found Love." True to the Smittens' twee form, the couple projected a cute animated video of the song during their first dance.

Zacharis adds that he and Chagnon wanted to incorporate several songs into their 2009 wedding. Myra Flynn sang Oasis' "Wonderwall" as Chagnon walked down the aisle. Fellow Smittens Colin Clary and Dana Kaplan performed "If You Need Someone" by the Field Mice during the ceremony. The rest of the Smittens, backed by One Happy Island, did the Archies' "Sugar, Sugar." One Happy Island also played the Left Banke's "Pretty Ballerina."

For first dance tunes, Zacharis suggests choosing a "short song and something you can dance to." Also, it doesn't hurt to have lots of talented musical friends. 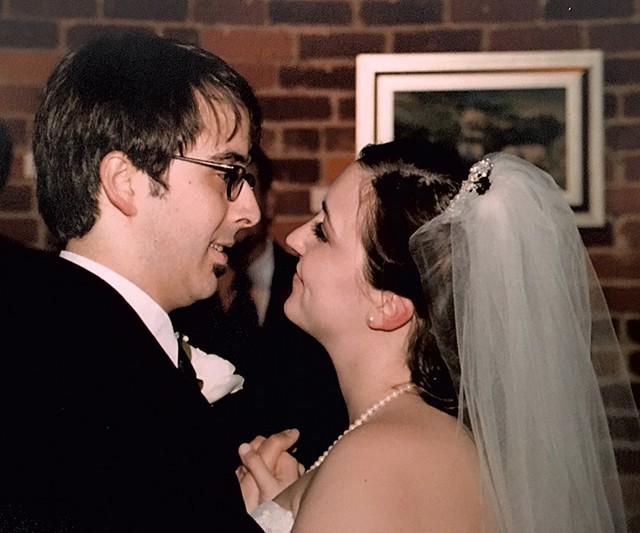 Before you roll your (bright) eyes, note that Phil Yates (Phil Yates & the Affiliates) and Sarah Venuti Yates (improv comedy troupe the Unmentionables) were well ahead of the curve choosing Conor Oberst's now near-wedding standard "First Day of My Life" when they got hitched in 2006.

"We picked it before it became cool to pick as a wedding song!" insists Yates. "I always thought I would have chosen Elvis Costello's 'Sweet Pear,' since the groom in the song is very self-deprecating, which is my M.O.," he continues. "Conor Oberst ended up winning that one."

"It's something that means something special to you and your partner," he says. "It's not like friends or relatives will make fun of you behind your back about your choice of song ... Fine. I totally do that."

"You Made Me Love You," James V. Monaco

Cliché phrases about love are, er, a dime a dozen. But here's one you likely won't see on a Hallmark card: If at first you don't succeed, try, try again. It might be an apt aphorism for jazz vocalist Audrey Bernstein and her fiancé, guitarist and recording engineer Joe Capps.

The two had worked together frequently prior to recording Bernstein's 2013 album Audrey Bernstein Loves Blue, a project she says "cemented our rocky-at-first friendship." Now the pair have been together for three and a half years; they got engaged on Christmas Day 2016.

"Joe was persistent, and it paid off!" she says.

Fittingly, when they tie the knot in 2018, the couple's first dance will be to James V. Monaco's "You Made Me Love You," which Bernstein recorded on her most recent album, Alright, Okay, You Win — which, come to think of it, might also be a nod to Capps' love-struck resoluteness.

Classics are classics for a reason. And, according to Gabrielle and Burette Douglas of the formerly Burlington-based band the Cush, that's all the more reason to choose one for your wedding. You don't want anything "too modern," says Burette, because "it might not age well. Hence, the couple chose a Neil Young classic, "Harvest Moon," when they tied the knot in 1993.

"Lyrics about a harvest moon, dancing and true love, set to beautiful music by Neil Young, is the perfect song to dance to," says Gabrielle. "And to seal the love we share for one another."

"And the line 'Because I'm still in love with you' really hits home year after year," adds Burette. "We had considered some other tunes by some bands we were listening to in the '90s, and I am eternally grateful that we chose wisely."

Love, as the old saying goes, is a many-splendored thing. And it looks — and sounds — different for everyone. Take Kristen and Kelly Ravin. The couple took an alternative approach to their first dance in August 2014. Or, more accurately, an alternative rock approach.

The Ravins' debut promenade as husband and wife was not to the dulcet tones of Etta James finding love at last, or Ol' Blue Eyes coolly serenading in the moonlight. Rather, it was to the manic screeching of Queens of the Stone Age front man Josh Homme on the hard rock band's psycho-metal cut "Six Shooter."

Says songwriter and guitarist Kelly Ravin, "It's a twisted tune that would make people laugh!"

Or maybe cower in fear. Here's a sample of the ditty's lyrics: "Two glass eyes / I'll fuckin' tell you lies / I'm on the side of the road / You won't fuckin' die." And that's just the first verse.

Ravin doesn't offer advice for anxious couples — which might be just as well, really. But clearly love, like beauty, is in the eyes and ears of the beholder.

"In the Fall (Undressed)," Future Islands

In both love and love songs, sometimes you've just gotta stake your claim.

"Future Islands is our mutual favorite band, and 'In the Fall' is one of our all-time favorite songs," says Monkey House general manager and Waking Windows co-producer Ali Fogel. She calls the "undressed version" of the song, which subs out Future Island's typical electro-pop vibe for a chamber-folk aesthetic, a "perfect fit" for her first dance with Brian Nagle — aka DJ Disco Phantom — this June.

"We wanted to do something unique and us," Fogel says, explaining that she and Nagle first saw FI at the Monkey early in their relationship and feel they've grown along with the band.

"Music is so important in our lives, and we wanted it to be truly our own," she continues — then adds a cheeky warning. "And we can be pretty positive that this is no one else's first song. So please, if you're reading this, back off."

The original print version of this article was headlined "Let's Dance"