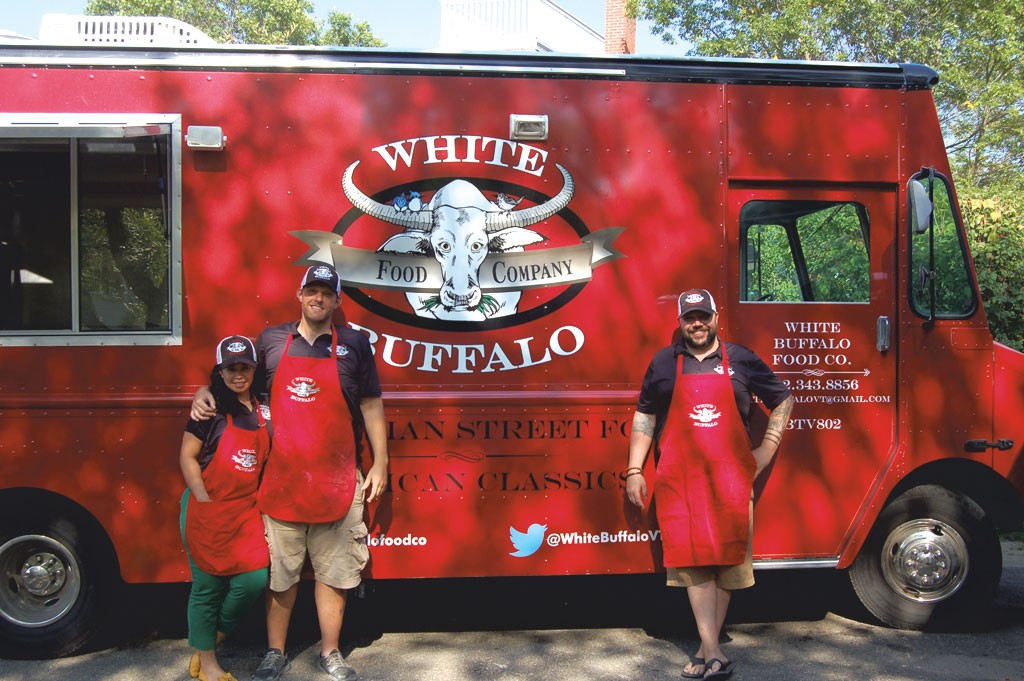 When Chris Smith lost his job at WCAX in May, he wasted no time pining. He quickly got to work on building his dream. Last week, he debuted a food truck, White Buffalo Food Company, along with his wife, Tara, and friend, Keith Gadwah.

The term "follow the white buffalo" "refers to taking an adventure or being spontaneous and walking a path," Smith explains. He's from Buffalo, N.Y., but the bovine on the truck's logo shares Tara's Indonesian heritage. The cuisines that each grew up eating are represented in the truck's offerings, as are Gadwah's native Vermont flavors.

In the truck's first week of operation, the most popular dishes were a fried-green tomato BLT with roasted-garlic-tarragon mayo; braised-beef rendang over jasmine rice; and beef on a weck (kümmelweck roll) — representing Vermont comfort food, Indonesian street food and Buffalo native fare, respectively. Smith says he's been especially surprised to see his fellow northern New Yorkers "come out of the woodwork" for his highly regional take on the roast-beef sandwich.

White Buffalo generally offers five items at a time, along with Rookie's Root Beer and ginger beer. Smith says his team has about 25 recipes perfected and ready to cycle on and off the menu.

Diners can find White Buffalo on Flynn Avenue throughout the week, typically parked in front of the "world's tallest filing cabinet" or closer to Oakledge Park. The truck will move around Burlington's South End as Smith finds more amenable locations, which he will post each day on Facebook. This week, White Buffalo will offer Tuesday evening service at Switchback Brewing and do a stint in front of Pine Street's old Vermont Transit Lines building during the South End Art Hop (September 11 to 13).