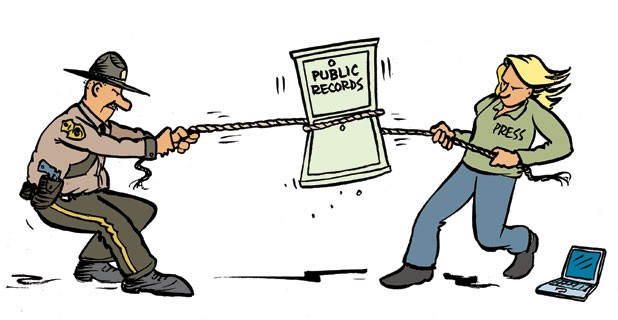 Vermont has some of the weakest public-records laws in the nation, and ever-louder calls for more transparency from government watchdogs and local news outlets have barely moved the needle.

Almost four decades after Vermont enshrined the public’s “right to know,” the state’s public-records law remains riddled with exemptions — 239 in all — that put everything from tax returns to Vermont Life magazine’s subscriber list off limits to the public.

But things may be changing — at least when it comes to law-enforcement records.

Gov. Peter Shumlin has called for legislation that would give news reporters and the public new access to previously closed police files. A series of police scandals in recent years — and subsequent lawsuits by news organizations seeking the resulting public records — have put pressure on elected officials to allow more public scrutiny of police conduct.

Last week, the Senate Judiciary Committee began work on legislation dealing with one of the most controversial public-records exemptions: documents relating to the detection and investigation of a crime. Presently, all police investigative files are categorically off limits to the public, whether a case is active or long since closed. Police don’t need a reason, such as claiming the records contain sensitive information that could compromise a case; they can simply cite the law and reject the request.

Lawmakers are also considering whether police personnel records should be made public when an officer is investigated for a crime but not ultimately charged.

Like many states, Vermont enacted its open-records law in the wake of the Watergate scandal. But since that 1975 law went on the books, lawmakers in Montpelier have watered it down with hundreds of exemptions. They include records related to maple products, air-contaminant source data and reporting of diseases related to weapons of mass destruction. A legislative study committee is midway through a three-year review of all 239 exemptions.

National government watchdog groups have taken notice. The Better Government Association, an anticorruption advocacy group based in Chicago, ranked the state 49th in its 2008 Integrity Index. Vermont earned the dishonor for its weak public-records law, but also because it has no laws dealing with conflict of interest by public officials or providing whistle-blower protections for state employees.

Similarly, the Center for Public Integrity, the D.C.-based investigative news organization, awarded Vermont a D+ for public access to information in its state-by-state Corruption Risk Report Card. One reason: The state has no agency or entity that monitors the application of its public-records law. In other words, journalists or average citizens are left to navigate the law on their own. If their request and subsequent appeals are denied, their only recourse is to sue the government for the records — often at great personal expense.

The state made one important modification in that regard last year: Shumlin signed a law requiring courts to reimburse citizens for legal expenses when they prevail against government agencies that have denied them records.

At a Statehouse hearing last week, the Senate Judiciary Committee received conflicting advice about how far to extend the public’s right to know when it comes to police records. Allen Gilbert, executive director of the American Civil Liberties Union of Vermont, wants the state to adopt the federal Freedom of Information Act standard, which presumes public access to records absent a specific harm that might be caused by their release. Shumlin has also endorsed that standard.

Practically speaking, that wouldn’t give the media or public instant access to case files. The federal standard still provides grounds for keeping records confidential, for instance, if their release could interfere with law-enforcement proceedings, deprive someone of a fair trial, constitute an unwarranted invasion of privacy or endanger the life of any individual. What the federal standard would do is force law enforcement to specify a reason for denying records.

Gilbert told lawmakers that 21 other states and the District of Columbia have already adopted the federal standard. He said Vermont’s categorical exemption to criminal investigative records has “caused more problems than it has possibly solved.” Some Vermont police agencies have become “overzealous” in their secrecy, he said, giving the impression they have something to hide. That, he said, has eroded overall public trust in the police.

Case in point: Hartford resident Wayne Burwell, a black man, was pepper-sprayed by police in his home after the cops mistook him for an intruder. VTDigger.org editor Anne Galloway sued the Hartford Police Department for records related to the incident after her document request was denied. The ACLU represented the nonprofit news site in its lawsuit against the cops.

“The way the law is written now, it’s so vague it’s been interpreted over and over again to favor law enforcement,” Galloway said in an interview. “We don’t know whether or not law enforcement is always acting in the public interest. Embarrassment [of police officers] is not a reason to keep records from the public. That’s what happened with the Burwell case.”

Galloway said Vermont news outlets should lobby Montpelier for better transparency laws but added that some news organizations seem reluctant to assume the advocate role. “I do hope that media organizations will pile on. I don’t know if they will,” she said. “It shouldn’t have to come down to a lawsuit every single time.”

The ACLU’s Gilbert says it isn’t just secret records from recent cases that should trouble the public. “How can people trust what police are doing if they can’t even see the records of something they did five, 10, 25 years ago?” he asked the committee. “That’s really extreme.”

Attorney General Bill Sorrell, Vermont’s top law-enforcement official, said he favors releasing records related to police officers investigated for crimes — even when they are not ultimately charged — but not for average citizens. That opinion essentially echoes a 2012 Vermont Supreme Court decision in a case brought by the Rutland Herald. Sorrell said the change would increase public confidence that the cops are adequately investigating their own.

But he told lawmakers that adopting the federal FOIA standard would be a “big mistake.” Sorrell said there’s good reason to withhold certain criminal records from the public and news media. For instance, it could endanger witnesses or victims, or unfairly implicate individuals who were investigated but eventually ruled out as suspects. To make his point, Sorrell invoked one of Vermont’s most notorious homicides: that of Patricia Scoville, the 28-year-old woman who was raped and murdered in Stowe in 1991.

“Eighty-two men were asked to give a sample of their DNA as part of that investigation,” Sorrell told lawmakers. “Some men, for reasons that they were known to hike in the Moss Glens Falls area, would be subject to having their names disclosed as once being a suspect in a rape-murder case.”

Sorrell also pointed out that all suicides begin as criminal investigations, meaning suicide notes could be deemed public records if criminal files become an open book. Offering another hypothetical, Sorrell said that if police photographs of a burglarized home became public, criminals could get revealing details about valuable items thieves may have missed.

In a subsequent interview, the ACLU’s Gilbert called Sorrell’s examples “red herring” arguments. Gilbert said the law would still contain personal privacy exemptions to prevent release of sensitive information. “Things like suicide notes would probably be considered embarrassing” and therefore off limits, Gilbert said, before adding one hypothetical as a caveat. “If someone said the suicide note would implicate the commissioner of public safety in a cover-up at the police academy, they could show there’s a strong interest in public disclosure.”

For its part, Vermont’s law-enforcement community is withholding judgment on any changes until lawmakers formalize them in a bill. However, the lobbyist for the 800-member Vermont Police Association guessed that many cops would object to Sorrell’s idea of creating different standards for criminal investigations of cops versus private citizens.

“Why would the public have a greater ability to look through police records?” asked lobbyist Ed Miller.

Miller also criticized a favored compromise of some open-government advocates: redacting sensitive information from police reports before their release. In theory, Miller said, an officer could easily cross out all names with a marker to protect privacy.

Department of Public Safety attorney Rosemary Gretkowski testified last week that the Shumlin administration supports rolling back the blanket exemption on access to police investigative files in favor of a “comprehensive proposal” that balances the public’s right to know with the need for privacy. Gretkowski said her agency fielded 1301 public-records requests last year — more than half the 2126 requests submitted to all state agencies. She added that responding to them often brings other work to a standstill.

“There have been times when, in the course of 24 hours, we get inundated with six huge requests, just from one person,” Gretkowski told lawmakers.

She passed around proposed legislation that would replace the blanket exemption for investigative records with the federal FOIA standard. Left unaddressed is a 30-year-old law that shields the personnel records of Vermont State Police employees. Since the 1970s, evaluations of state troopers and other VSP employees have been off limits to the public. The records of all other state employees can be disclosed unless another exemption comes into play.

The senators last week were at times noticeably confused as witnesses led them through the backwater of public-access law. “This is not going to be finished today,” Senate Judiciary Committee chairman Dick Sears (D-Bennington) said toward the end of the hearing. “I promise you that.”