As September cools the air and youngsters head back to school, creemee sales normally dip. But the recently launched Vermont Maple Creemee truck will keep serving its frosty treats through Halloween at parks and events around northern Vermont, co-owner John Paré said, including at this weekend's South End Art Hop.

The Burlington-based, family-run venture will, however, lose one of its quartet of operators to college this week.

John's middle son, Levi, 18, just started his first year at the University of Vermont, where he plans to study computer science. He's putting in a few final shifts as the crew's most expert creemee swirler before leaving his brothers, Luke, 23, and Ira, 17, to man the truck with behind-the-scenes support from their dad.

The cost of the brothers' college education instigated the June 2022 launch of the truck, John explained on a recent evening at Burlington's Oakledge Park while Levi and Ira served free creemees to a group from Special Olympics Vermont.

All proceeds from the truck go into the Paré brothers' college fund or toward school loans. Luke graduated from UVM in 2021, and Ira is a Burlington High School senior who hopes to attend UVM to study nursing.

John was inspired to start Vermont Maple Creemee by his cousin Eric Chevalier, who ran a creemee stand in Isle La Motte with his family that helped fund his two daughters' college educations.

The cousins grew up in Swanton in a maple sugaring family. Their grandfather's sugar bush is now run by Chevalier, who used the syrup in his maple creemees.

After Chevalier closed the stand about five years ago, John missed the creemees. "They were so good with the flavor of the syrup right out of the evaporator," he said.

John started exploring the idea of a seasonal creemee truck run by his sons to help underwrite their college bills and build life skills. "I thought it was the perfect business for them to do on their own with the hours they wanted."

When he broached the idea, "they thought I was kidding," John said. But he persevered and found a used truck in North Carolina, which father and sons spent the summer of 2021 rehabbing in their South End backyard. Luke's UVM roommate Andrew Salerno, a graphic designer, created the eye-catching Vermont Maple Creemee brand design.

The creemee menu features just two purist flavors: vanilla and maple that's sweetened with the family's syrup, of course. The Parés buy the base from Kingdom Creamery of Vermont in East Hardwick, the richest, 10 percent-fat option. Cones start at $4 with optional toppings, including UVM green and gold sprinkles. Shakes are $6. 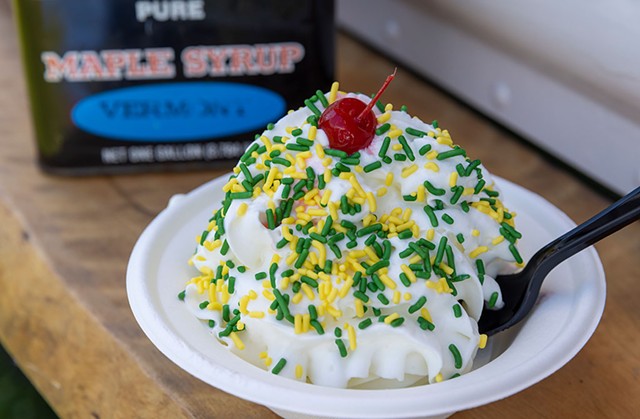 Customer Elaine Gordon of Burlington stopped for a cone on her evening stroll through Oakledge Park. She declared herself a "connoisseur of maple creemees" and deemed Vermont Maple Creemee's offering excellent: "smooth, creamy on the tongue, with a very nice maple flavor."

In their debut season, the Parés have served at parks, concerts and food truck events, and they've been hired for weddings, birthday parties and a celebration of life.

Ira and Levi said the new family business has been fun but definitely hard work. Levi, who also cooks at Burlington Bay Market & Café, said he was the only family member who was "right on board" with his dad's idea — though the others soon came around. The whole experience has been rewarding, he said, especially renovating the truck.

"It's fun to just roll up to a place and have a bunch of people come up," Levi said. "There's this rush of excitement."

"We meet so many new people," Ira added. "It's really nice to bring smiles to people's faces."

The original print version of this article was headlined "Sweet Rewards"