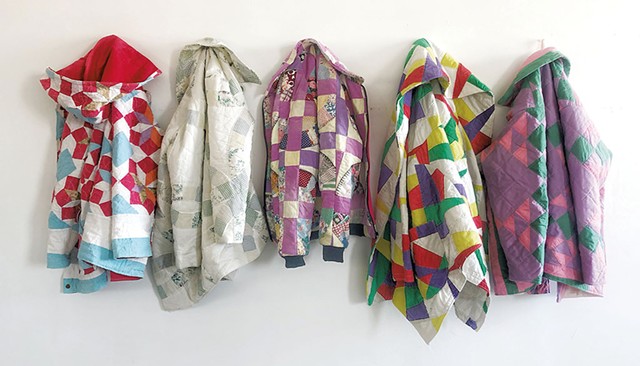 If 2020 made you crave a simpler life, you're not alone. The pandemic year motivated Americans to take up embroidery, install chicken coops in their backyards and, for those who could afford it, buy property sight-unseen in rural states, including Vermont. Aesthetics, both in fashion and home design, quickly followed. News media documented the proliferation of the nap dress, a flowing dress-nightgown hybrid. Pressed and dried flowers proliferated. Hand-knitted sweater tutorials abounded on social media.

Terminology sprang up around the trends, too, and words such as "cottagecore" and "cabincore" quickly became part of the online lexicon. To better understand the style — and whether your clothes fit the definition — you can ask yourself: Might I wear this item walking through a meadow with a wicker basket or putting my vintage kettle on the stove as rain pounds the windows of my woodland chalet?

One particular trend has brought a boom in business for two Vermont makers: the quilt coat. A November story in the New York Times attributed the trend's origins to a high-fashion menswear line from 2018, but the real purveyors of this rustic, patchwork outerwear are individual craftspeople. They're reworking antique, hand-stitched quilts into wearables in hopes of bringing fresh perspective to a historic art form. 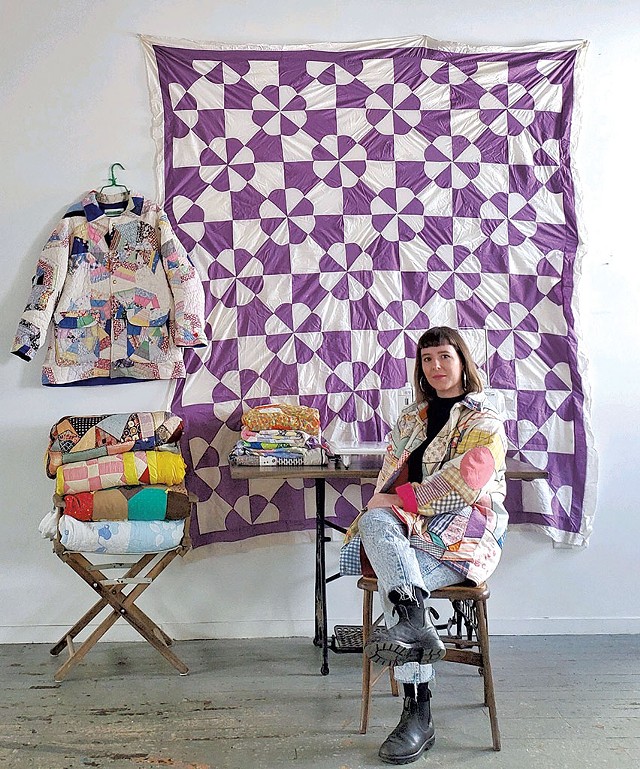 South Burlington's Kathleen McVeigh, 33, first saw quilting at a young age. She would spend days with her grandmother, who sat in a recliner sewing quilts, an afghan over her lap. She was loyal to a single pattern, an array of triangles, McVeigh said, and worked with material from the family's old clothing or household items.

It wasn't until she was studying art at Sarah Lawrence College that McVeigh began to seriously consider the work of her grandmother and other quilters. "I never really thought about it as an art form until I went to college," she said. "I don't know why I kind of separated those two things, craft and art, in my head."

A professor encouraged her to experiment with textiles, and McVeigh's work soon evolved to feature tapestries and other fiber arts.

After she moved to Vermont, in 2016, McVeigh made her first traditional quilt. She found the math intimidating at first — quilting is fundamentally an exercise in geometry. McVeigh's quilts often feature large, bold shapes and color palettes that hark back to the 1970s; by quilting standards, her work is minimalist and modern.

Her enthusiasm for quilting led McVeigh to begin collecting quilts made by others "probably since 2012," she said. In early 2020, she transformed one for the first time.

"If COVID hadn't happened, I never would have made a quilt coat," McVeigh said. "I was really just dealing with a space issue."

She'd stopped sewing at her studio at the Hive on Pine in Burlington's South End and needed a project that could be done at home. Her first coat was made from a thrift-store quilt that was stained. The response from friends was enthusiastic, so she made more. Then she began selling her quilt coats under her moniker Kitty Badhands.

"I think I'm really lucky to have had this idea at the time that I did, because it seems like quilt coats are really a thing right now," McVeigh said.

Though McVeigh has drawn from her own collection of quilts to make the coats, some customers request custom coats made from family quilts that have special value. And McVeigh occasionally has been asked to design and make a new quilt, and then turn it into a coat, but so far she's turned down those jobs.

"The center of the idea of the quilt coat is bringing new life into something that isn't being used," McVeigh said. If a quilt still can be used as a quilt, she thinks it should be. "I'm really not interested in finding a pristine quilt and chopping it up," she said.

Ashley Saville of Winooski, who launched a business making quilt coats and overalls a few months ago, is similarly respectful of the quilts with which she works. She looks for old "cutter quilts," which are ripped or stained, and tries to use every scrap of the fabric.

"There is so much skill and time and love that goes into creating each quilt, and I don't take it lightly, cutting them. I really want to honor the work and highlight it in a new and perhaps unexpected way," Saville said. "At least it's out in the world, being appreciated and used daily — and hopefully becoming an heirloom piece that folks will pass down."

Saville, 34, has no formal art and sewing background, though she's been a knitter for most of her life. But, having grown up around her father's bed-and-breakfast in southern Vermont, she was familiar with the value of quilts as antiques.

"As I got older and learned more about the fast-fashion industry, and [with] consumerism all around us, I really started focusing on shopping secondhand; mending and slow fashion; having fewer, better things; and investing in pieces that will be around for a long time," Saville said. "I think the next logical step from there, really, is making things for yourself ... When I started sewing, it made sense to me."

When Saville made her first quilt coat, the mental task of creating a symmetrical design from a limited quantity of patterned material appealed to her. She started an Instagram page last September under the name Anemone VT, intending that her quilt coats would be a side project. But, unexpectedly, the business took off. 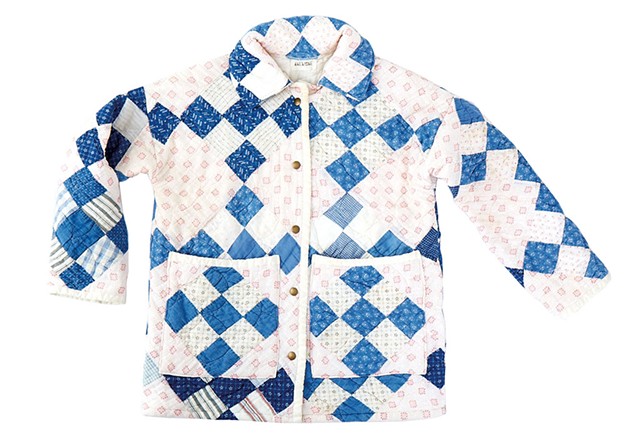 Saville was able to reduce her hours working in a restaurant and move her sewing to a studio. She also started making overalls, born out of her love for one-piece clothing. Demand for both coats and overalls is strong; she currently has commissions scheduled through May.

Saville said she's happy to see that her customers value the age and craftsmanship of the quilts she uses.

"The idea is keeping [quilts] on our bodies and fitting [them] into our modern lifestyle and keeping them in active rotation instead of being relegated to a closet or barn or a landfill, potentially, which is horrible," she said.

Both Saville and McVeigh said many of the people who buy their items are invested in sustainable fashion and value quality.

"Now different people are appreciating the quilts, and I think it's awesome that someone who made a quilt in 1910 or 1920 is getting the attention of some 26-year-old skater," McVeigh said. "I hope the original maker would be excited about that."