When it was Antony's turn to speak, he introduced himself as a leader of Harwood's farm-to-school club. The teen explained that he was 3 when his family moved from India to Waterbury. "My first experiences with American cuisine were in the lunchroom at school," he said.

The chicken was Vermont-raised, and the vegetables were grown in the school garden, Antony recounted. "From a young age, I was taught and I saw that this food is grown locally, and it tastes better and is more nutritious," he said.

The Shelburne gathering followed Leahy's early August announcement that he had secured committee approval to include $5 million in the federal budget to establish a National Farm-to-School Institute at Shelburne Farms.

The proposed national institute will expand the reach of the existing Vermont-based Northeast Farm to School Institute currently run by Vermont FEED (Food Education Every Day), a nonprofit partnership managed by Shelburne Farms and the Northeast Organic Farming Association of Vermont.

Founded in 2000, Vermont FEED has been instrumental in fostering connections between Vermont schools and farms — from the cafeteria to the classroom — in support of improved childhood nutrition, local agriculture and lifelong wellness.

The organization's influence spread beyond the state's borders until it was codified when Vermont FEED established the Northeast Farm to School Institute in 2010. The institute has helped share best practices via training and coaching in more than 100 schools and districts in New England and New York.

States from Massachusetts to Nebraska have also worked with the Northeast Farm to School Institute to build their own successful statewide programs.

Shortly after the Mississippi Farm to School Network was established in 2015, codirector Sunny Baker visited Vermont for a workshop.

"We knew right away Vermont was the model," Baker said over the phone. "It's not one-size-fits-all. It's about putting power back into the communities while providing formal support to help them connect the three Cs," she said, referring to cafeteria, classroom and community. "It's less top-down, more roots-up."

Anna Mullen, spokesperson for the National Farm to School Network, described Vermont as a national leader in creating and propagating effective farm-to-school models and in leveraging critical legislative support. In a phone interview, she noted that the state was the first to create a farm-to-school grant program in 2006 and that Leahy has long been "a huge champion" of the movement at the federal level.

The pending federal line item would fund expansion of "a really impactful ... coaching and support model that brings together teams to fit the needs of their school and achieve the vision of their own community," Mullen said. The proposal to take it national "is a testament to a model that's really helping and working.

At Shelburne Farms in August, Antony continued to share why he was drawn to farm-to-school. In middle school, he said, he took a sustainability course that taught him about the food system. Joining the farm-to-school club deepened his understanding of the "inner workings" of how schools source and prepare food, Antony explained.

During the pandemic, he and his coleaders worked hard to keep fellow members connected to the club and to one another through virtual farm tours and Harvest of the Month recipe contests, Antony said. They created recipes with beets, sweet potatoes and dairy at home, for example, and then took virtual tours of farms that produced those foods.

"Keeping the students engaged, telling them where their food comes from, making them informed about what they eat really creates a better environment and healthier kids," Antony concluded.

"I wish I'd had you testify before the committees," Leahy said, drawing an appreciative chuckle from the group.

A couple weeks after meeting the senator and agriculture secretary, Antony met with Seven Days in the Harwood cafeteria along with three other teens in the farm-to-school club. Joining the four were Paul Morris, codirector of food and nutrition services for the Harwood Unified Union School District; Paul Kramer, a teacher and club faculty adviser; and Jen Dreimiller, a school counselor who is also on Harwood's farm-to-school team. That team is composed of teachers, staff, students and community members working to deepen the high school's farm-to-school efforts.

Like Antony, Miranda Rayfield of Fayston and Macie Whalen of Northfield are 16 and just started 11th grade. The trio leads the club. The students look forward to getting back into the cafeteria kitchen with "chef Paul," as they call Morris, to design, prepare and serve Harvest of the Month taste tests. While they enjoyed the monthly recipe contests that Antony had described to Leahy and Vilsack, sharing the results of their efforts remotely wasn't the same.

"We provided the food, and [members of the school community] got to make something out of it and share it via a slideshow we'd show at an online school assembly," Whalen explained. Photographs of beet recipes included a mouthwatering array of several different beet-chocolate cakes; beet-tahini pasta; a beet and potato roesti; and a version of halwa, the traditional Indian sweet, made with beets.

"Some people think vegetable are 'gross and disgusting,'" Whalen said. "But then when they cook with them and see or taste what others have made, they might change their mind."

"When you share it with the whole school, it gets more attention," Antony added.

During the pandemic, the students drew other benefits from their shared cooking experience. "You were at home, locked down. It gave us a great way to connect," Whalen said. "Like, Jeswin's sweet potato and black bean curry — it looked so good! [We were asking each other,] 'Did he send the recipe?' It was really cool to be connected through food."

Haley MacDonald, 13, of Moretown, joined the club last year when she was in seventh grade. With the kale she received through the club, she made two kinds of kale chips at home: one salted and the other sweetened with a little maple syrup.

"It was my first time making them myself," MacDonald said proudly in the cafeteria. Her family, including her 9-year-old twin brothers, inhaled them. "They were gone in a minute."

"It also helped me realize there are lots of local farms," MacDonald said. "Like, 'Oh, I got kale from there.' It's really cool to be able to cook with what they grow and support them."

During a virtual farm visit to Butterworks Farm in Westfield, Whalen described excitedly, "They showed us their cows and their butter compared to store-bought butter. You could literally see the difference in color."

"And texture," Rayfield said. "You could almost feel the love."

"I've gotten a whole community out of it," Whalen continued. In addition to the teachers and chef Paul at school, she said, that includes the farmers. "It's a community beyond Harwood Union High School."

The 5-year-old club is just one aspect of the district's well-established farm-to-school program.

Morris, the food and nutrition services codirector, has been sourcing from local farms all 15 years he has worked at Harwood. But, while the cafeteria was lauded initially for its fresh, locally sourced menu, Morris said there was untapped opportunity. "It was not super connected to teachers and staff. It was us trying to push it out," he said.

Enter the Northeast Farm to School Institute. Six years ago, a team of Harwood school and community members started meeting regularly with a coach from Vermont FEED to build on efforts in the school kitchen. That was what "kind of got the ball rolling," Morris said.

"The program really started to gain momentum when students had experience outside the cafeteria," he said. "They didn't want to talk about it; they wanted to do things."

This fall, Harwood students will return to a neighboring nonprofit farm, Living Tree Alliance in Moretown. There, they have moved mulch, planted hazelnuts, made sauerkraut and learned how the farmers rotate their small flock of sheep to graze different paddocks. The farm has sold Harwood cabbage and potatoes for use in its cafeteria.

One Harwood civics and social studies teacher used grant money to build a hoop house behind the school in which students grow salad greens. These, too, become cafeteria fare. 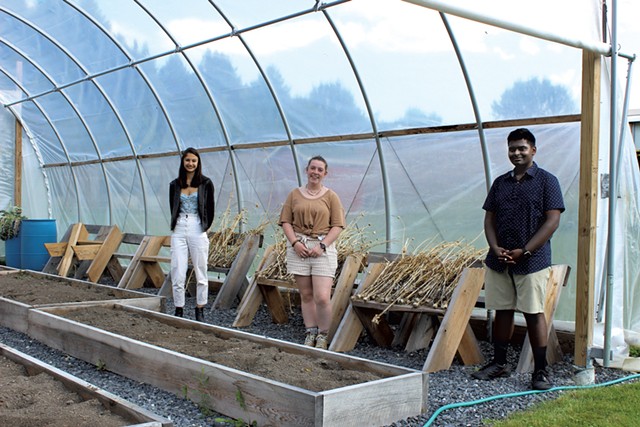 The farm-to-school team came up with a local food challenge offered to all homerooms: Students tasted something locally grown and learned about the concept of food miles and the benefits of buying closer to home. Farm-to-school club members even collaborated with students in a graphic design course to develop a logo emblazoned with a shovel and fork and the words "community, cafeteria, classroom."

Kramer, the club's faculty adviser, said he was pleased when students asked how they could build advocacy skills and help others access local food. Last year, a group of club members partnered with a local gleaning organization to pick apples at a Randolph orchard to donate to area food shelves. Antony and a student who has now graduated worked with Vermont FEED to testify in front of the state legislature.

"We are very grateful to eat this healthy, local food, but not everyone gets to," Antony said in the cafeteria.

"The students are seeing the larger picture," Kramer said. "Farm-to-school is a great, tangible lens for kids to understand things like equity and social justice. They are understanding how things are connected and using that understanding to find leverage points to solve problems."

Being involved in farm-to-school, Antony said, has opened his eyes to the complexity of the food system and to his own ability to make a difference.

"It's all intertwined: nutrition, the education system, the legislative system, even waste," he said. "There's massive change we can do in all those spheres. I want to take some action."

The original print version of this article was headlined "Homegrown Health"