Vermont Law Allows Rapists Parental Rights. A Pair of Bills Would Change That. 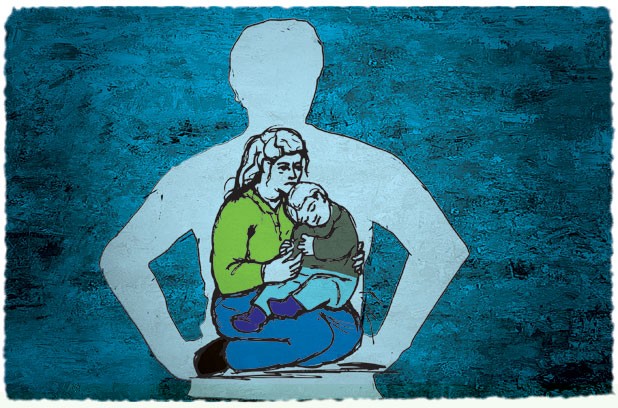 Vermont is one of 31 states that allow men who have fathered children through rape to petition the court for visitation rights or custody of their offspring. Convicted or not, they have the same rights as any other biological father — a fact that can force victims to face their attackers in court custody battles or to raise their children in partnership with them.

In 2007, the Vermont Supreme Court faced this scenario when convicted rapist Robert LeClair sought to “establish parentage of, and rights and responsibilities for” a child conceived during a statutory rape of a minor. At the time of the rape, the victim was 15 and LeClair was 37. The victim’s mother filed a motion to dismiss LeClair’s action, which the family court granted.

But the Vermont Supreme Court later overturned that ruling stating the family court “erred in dismissing the action before a factual record was developed” and that state law grants any person claiming to be the natural father of a child the right to pursue a parentage claim — regardless of whether that child was the result of a sexual assault. Eventually, the plaintiff dropped the case. However, the court proceedings took a huge financial and emotional toll on the family of the victim.

Two bills recently introduced in the legislature — S.49 and H.88 — would prohibit rapists from obtaining visitation or custody rights to their rape-conceived children.

“My hope is that this bill will allow Vermonters who have already been through the trauma of a sexual assault to be able to have the space and freedom to heal from their experience, while also being able to keep a child conceived through the assault without the anxiety of facing their assailant in court,” says Rep. Kesha Ram (D-Burlington), a cosponsor of H.88.

Sarah Kenney, associate director of public policy at the Vermont Network Against Domestic and Sexual Violence, says that when a rapist is awarded visitation rights, the victim is tied to her attacker for a lifetime. Women in these situations may never overcome the trauma of their rapes as they are involuntarily forced to interact with their rapists on a regular basis.

Survivors often fear for the safety of their children, Kenney adds, or worry about the shame, fear and abuse their children may endure at the hands of their rapist fathers. “Part of their trauma is facing the prospect that the person who sexually assaulted them would then have access to their children,” explains Kenney, noting that the situation could also confuse and psychologically damage the children.

“What we see again and again is that perpetrators of violence use the court system as a way to continue to traumatize their victims,” says Kenney, which means that a rapist or batterer will continue filing motions for custody “just to drag the victims back into court, to add to their financial burdens and to make it really clear that they’re in charge.”

In addition, rapists can use custody proceedings as a weapon against their victims. A rapist can ask his victim to give up her legal rights to a criminal trial in exchange for a waiver of his parental rights to the victim’s child. This predicament presents women with a difficult decision: Do they protect society or do they protect their child?

Adoption is no easier. Under current state law, a rape victim who decides to place her child for adoption must notify her attacker and gain his consent.

The similarly worded House and Senate bills would allow a family court judge to award permanent sole parental rights and responsibilities to the survivor of rape, if she can provide “clear and convincing evidence that the child was conceived as a result of a sexual assault.” The rapist is then barred from petitioning the court for custody or visitation rights.

The legislation would strip rapists of some parental rights, but not of all the responsibilities; they could still be on the hook to pay child support. “We wanted to ensure there was a provision that allowed the victim to maintain sole custody while also having the option of receiving child support,” says Ram. “This would not have been possible with fully terminating the assailant’s rights.”

Because a criminal conviction of rape would not be required for a court to award sole custody to a survivor, opponents of the bills worry that innocent men could lose visitation rights to their children. Others worry the legislation could negatively impact the children involved.

Sen. Peg Flory (R-Rutland), an attorney who specializes in family law, understands and supports the intent behind the bill. But she questions its “clear and convincing evidence” clause, which is a lesser standard than a criminal conviction. She points out that most rapes are perpetrated by someone who is known to the victim, such as a spouse, boyfriend or a date. Proving the child was a result of the sexual assault and not a consensual act could pose difficulties.

“I’m not sure ‘clear and convincing evidence’ is enough to take away the child’s right to having a relationship with his father,” Flory says. “How hard is it going to be to prove that the child was a result of that assault, and not as a result of a consensual act that happened a week prior?”

Flory also notes that courts already have the ability to place conditions on parent-child contact — requiring visitations to be supervised, for example — if the court feels the parent in question is a danger to the child in any way.

Supporters of the bill argue that requiring a criminal conviction would seriously weaken the legislation. Decades of research have shown that rape is a drastically underreported crime. Even when a sexual assault is reported to the police, it rarely results in a conviction. According to End Violence Against Women International, for every 100 forcible rapes committed in the United States, approximately five to 20 are reported, 0.4 to 5.4 are prosecuted and only 0.2 to 5.2 result in a conviction.

“We don’t want to limit the law to only those cases that result in conviction, since that would exclude the vast majority of victims of sexual assault from the protections contemplated in the bill,” says Kenney. She also argues that the “clear and convincing evidence” clause poses a significant legal hurdle: Victims would have to prove a rape occurred and that the child was conceived as a result of it, providing physical evidence, genetic tests or witness testimony.

H.88 has 44 cosponsors, but it’s unclear whether the bill will emerge from the House Judiciary Committee before the legislature’s March 15 crossover deadline. Kenney is optimistic that the bill will pass next year — the second year of the legislative biennium — if it stalls out this session.