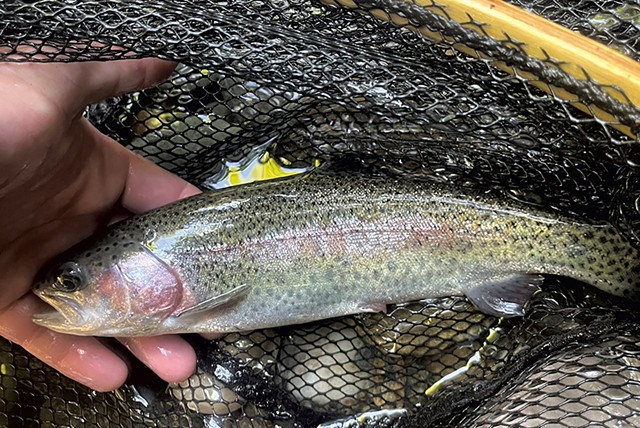 Andrew Ruiz is on a mission to catch as many different kinds of fish as possible. The New Jersey resident thought he would have to go to Northern California to add Eagle Lake rainbow trout to his list — until he heard that he could fish for the western strain of trout in Vermont.

"I couldn't believe it," Ruiz recalled. "I remember thinking, I gotta get one of those."

And he did. Ruiz recently traveled to Cavendish, where he landed an Eagle Laker for spot No. 236 on his list.

Anglers from other parts of the country have expressed similar excitement about the prospect of fishing for the Eagle Lake strain in Vermont. One contributor on westernbass.com commented: "I guess they moved Vermont to the West Coast when I wasn't watching !!!"

The Vermont Fish & Wildlife Department has begun stocking this distinct strain, or genetic variant, of rainbow trout in 11 bodies of water, including the Huntington River and Barton's Crystal Lake. The experiment is intended to bolster the state's recreational fishery with something hardier than Erwin-Arlee rainbow trout, the strain the department has been stocking.

Vermont has been transferring hatchery-bred trout into streams, ponds and lakes since the early 20th century. Stocking gives anglers a chance to catch fish such as rainbow trout in lakes and ponds where they wouldn't otherwise be found. According to Lee Simard, a state fisheries biologist, Vermont limits stocking to habitats where conditions aren't suitable for wild fish, to avoid competition with them.

"We want to get back to the point where we can have some rainbow trout that will survive through the summer and survive multiple seasons." Lee Simard tweet this

The vast majority of fish stocked in Vermont are of the "put and take" variety, which means that biologists do not expect them to survive the warm water temperatures of summer. But the longer a fish can survive, the bigger it will get and the more desirable a catch it becomes. Eagle Lake trout are expected to be more tolerant of warm water.

The state stocks salmon, walleye, muskies and trout, to name a few. "We try to provide people with an opportunity to fish for different species," said Jud Kratzer, a state fisheries biologist.

Fisheries director Eric Palmer said Vermont will spend $4 million on fish hatcheries this fiscal year. In 2010, the last time the department did an assessment, it was estimated that recreational fishing brought in at least $31.6 million each year.

Rainbow trout in particular draw anglers to the state, and Vermonters have ranked them high on a survey of preferred species. "Some people say they taste better than lake trout," Kratzer said. That's led the state to drop 115,000 rainbow trout into lakes and rivers each year.

But not everyone applauds the practice. Some anglers fear stocking introduces non-native species that can compete with Vermont's wild fish. Bob Mallard, executive director of the national Native Fish Coalition, called it a waste of money.

"It is a form of pollution," he said. "These fish are heavily domesticated and carry diseases, parasites and viruses with them."

Others cite a personal ethos. Eric Warren of Woodstock got hooked on fly-fishing in the early days of the pandemic. "Wild fish are more interesting because that animal has had to find a way to survive from the moment it was born," he said.

A vegetarian, Warren practices catch-and-release fishing. He said he enjoys getting outside and practicing a skill that forces him to pay attention to his surroundings. He has no criticism, though, of those who catch fish for dinner.

Regardless of their motivation, recreational anglers have caught fewer rainbow trout in recent years. They've complained that the stocked trout are too small and difficult to catch. The reason wasn't initially clear to state biologists, though. "It's kind of like solving a mystery or a puzzle when you are hearing it enough," Kratzer said.

Until 2008, the state raised a rainbow trout line known as Wytheville, which was well liked and easy to catch. But that year a major pump failed at the Salisbury hatchery, and the fish all died. Vermont couldn't get more supply from neighboring state hatcheries because of concerns the fish might carry disease. State biologists landed on the Erwin-Arlee strain, which was easy to purchase and very catchable, as a replacement.

But based on angler reports, those trout haven't thrived in a number of lakes.

"We want to get back to the point where we can have some rainbow trout that will survive through the summer and survive multiple seasons," Simard said.

That became the impetus for a department-led analysis of the survival rates of various strains of trout, including the Eagle Lake line. Kratzer said an evaluation by the Maine Department of Inland Fisheries & Wildlife identified the Eagle Lake strain as a genetic variant that could survive better in the wild.

This spring, Vermont released the first batch of the new fish. By the fall of 2024, it will stock 8,000 to 10,000 Eagle Lake trout alongside the traditional Erwin-Arlee to evaluate differences. The two strains look much alike, but the Eagle Lake strain has a missing left ventral fin on its bottom midsection, while Erwin-Arlee trout have a missing right ventral fin.

Fish & Wildlife is asking anglers to fill out a survey after catching trout in any of the waters stocked with the new strain. They've also asked anglers to snap a picture of the fish and to record its length.

Results from the survey are slowly rolling in. Initial findings suggest that the new trout may have been released when they were too small, thus decreasing their survival rate — fewer are being caught than anticipated.

Warren, the Woodstock angler, is one fisherman who hasn't yet caught an Eagle Lake trout. Nevertheless, he was happy to complete the survey after fishing in Windsor County and has even ventured out a few times this summer just to try to collect data. But it's not as if he needed an excuse.

"If you're trying to catch trout," Warren said, "you're almost always going to be in beautiful places."