Vermont International Film Festival Returns With a Focus on Journalism

Cries of "fake news" fill the political sphere. Social media companies reckon with a misinformation epidemic. Newsrooms confront their own biases. Clearly, 2020 is a pivotal year for journalism, and this year's Vermont International Film Festival is taking a long, hard look at the profession.

Running from October 23 to November 1, this year's VTIFF is all virtual, with a program of 12 films arranged in six pairs and a Q&A accompanying each pair. Ticket holders have a three-day window in which to view each film, with the livestreamed discussion falling within that window.

Local film fans may recall that journalism was the theme of VTIFF's Global Roots Film Festival scheduled for April 2020. Once the pandemic ruled out in-person screenings, that fest was canceled, and VTIFF began offering a robust selection of virtual cinema offerings.

VTIFF's flagship festival normally takes place each October in Burlington, offering a wealth of screenings and discussions. "Once we knew for sure that it would be virtual," executive director Orly Yadin said in a phone call, "we started rethinking that festival, because virtual is very different in terms of audience engagement."

Given that the festival ends just two days before a national election that feels like a referendum on the press and democracy itself, Yadin and the other VTIFF programmers decided to "transfer that [journalism] theme and make it the focus of the festival," she said.

While some of the films are topical, others offer a slice of journalism history or an iconic pop-culture portrait of the press. tweet this

To the 11 films already chosen for Global Roots, they added the 2020 documentary A Thousand Cuts, which chronicles the risky mission of journalist Maria Ressa to hold Philippine President Rodrigo Duterte accountable for alleged human rights abuses. Yadin called the doc "very interesting ... in terms of the very, very current issues it raises about cyber journalism and the use of social media by journalists."

While some of the films are topical, others offer a slice of journalism history or an iconic pop-culture portrait of the press — for instance, Network and Good Night, and Good Luck. Rather than pairing similar films, Yadin said, VTIFF sought to generate dialogues between fiction and fact, past and present, and different approaches to the topic.

Take the pairing that opens the fest: The Front Page (1931) and This Is Not a Movie (2019). The former, an early sound film full of overlapping dialogue, puts viewers in the lightning-fast world of news reporting in Depression-era Chicago. The latter, a documentary portrait of Middle East correspondent Robert Fisk, demonstrates the virtues of slowing down and investigating in depth, according to Yadin. The two movies have "nothing to do with each other," she said, "but if you watch them, you'll see how they play against each other." 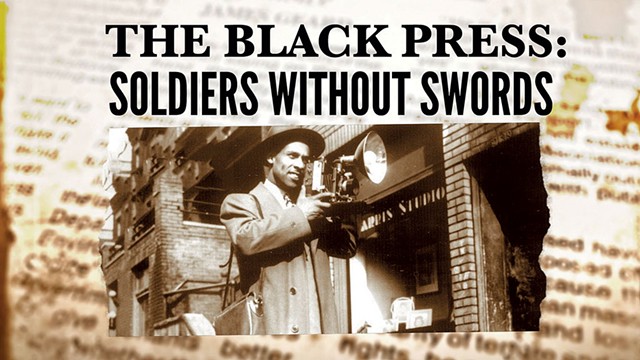 Similarly, the period drama Park Row (1952) and the documentary The Black Press: Soldiers Without Swords (1999) explore different ways of deciding what is "newsworthy." The doc, which Yadin called "fascinating," is about the alternative newspapers that Black journalists founded in every major U.S. city, starting in the 19th century, to tell the stories that white-run media ignored.

Moderating the discussions will be Saint Michael's College prof and former Associated Press correspondent Traci Griffith, Vermont PBS and Vermont Public Radio veteran Fran Stoddard, and Champlain College professor Van Dora Williams, a former PBS producer. Besides some of the filmmakers and their subjects, Q&A panelists will include Christina Asquith of the Fuller Project for International Reporting, Paula Routly of Seven Days, Anne Galloway of VTDigger.org and others.

For those new to the concept of virtual cinema, Yadin offers assurances that, yes, you can stream the films through devices such as Roku and Apple TV, once you've paired them with VTIFF's app. Pandemic or no, "This virtual thing is here to stay," she said. "We might as well make it the best possible experience."