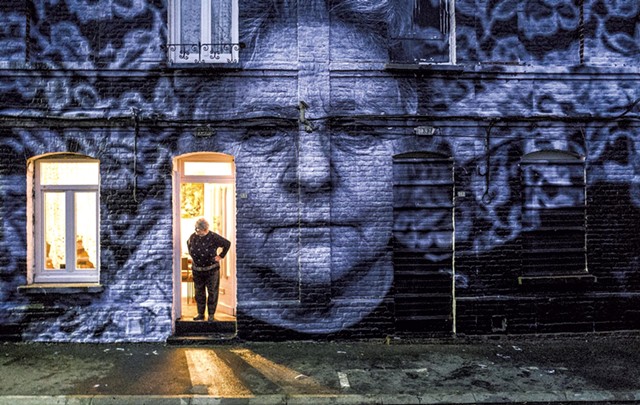 Politically and environmentally speaking, 2016 and 2017 have been real doozies. Anyone desperate for some sort of artful meditation on the world's sundry crises can find plenty of fact-based fare at the upcoming Vermont International Film Festival. And for those who prefer to check out, well, movies always provide a little escapism, right?

VTIFF, produced by the Burlington-based Vermont International Film Foundation, is in its 32nd year of screening contemporary cinema from around the globe. From October 20 to 29, this year's fest will bring 68 films to the shores of Lake Champlain — specifically, to Main Street Landing Performing Arts Center and the BCA Center. As always, festivalgoers can expect programming that slants toward social justice and touches on myriad world issues in both narrative and documentary format.

Last year, the Black Lives Matter-led movement against police brutality rocked the U.S. Sabaah Folayan and Damon Davis' 2017 documentary Whose Streets? offers a raw, ground-level view of the 2014 uprising in Ferguson, Mo., following the police-shooting death of Michael Brown. As VTIFF executive director Orly Yadin writes in the festival guide, the film "privileges the point of view of predominantly working-class and poor African Americans in a suburb of St. Louis."

In contrast to the intensity of Whose Streets?, Quest is a "slow" documentary 10 years in the making about an African American family living in Philadelphia during the Obama years. VTIFF programmer and Seven Days contributor Luke Baynes calls this feature debut of Jonathan Olshefski "a moving portrait of a family that bows but doesn't break."

2016 also witnessed the Standing Rock Sioux-led battle against the Dakota Access Pipeline. While that story isn't part of this year's VTIFF lineup, indigenous histories figure in Rumble: The Indians Who Rocked the World, from Canadian filmmakers Catherine Bainbridge and Alfonso Maiorana. This rock doc chronicles the substantial and underpublicized influence of Native artists on American rock and roll. Its producer was Rezolution Pictures, a Montréal-based, indigenous-owned company.

Sami Blood, a narrative directed by Amanda Kernell, addresses colonialism on the other side of the Atlantic. Kernell's debut feature takes place in northern Sweden in the 1930s, during the oppression of the region's Sami people. Programmer Julia Swift writes in the fest guide, "This is not a tortured story of an occupied people, but rather a complex tale of a strong young woman searching for her future, her dreams, her connections and her identity."

Several "firsts" will screen at the festival. Pop Aye was the first-ever film from Singapore to screen at the Sundance Film Festival, where it received the World Cinema Dramatic Special Jury Award. This pachydermic take on the road movie tells the tale of an existentially lost architect and his elephant friend, Pop Aye, who embark on a journey across Thailand in search of the farm where they grew up. (At press time, it was also playing at Montpelier's Savoy Theater.)

Israeli/French narrative feature In Between (Bar Bahar) earned its Palestinian director, Maysaloun Hamoud, the first fatwa to be issued in Palestine since 1948. The film tells the story of three women friends living and working in Tel Aviv's underground Palestinian music scene.

Other women-helmed films on the roster include City of Joy and Divine Order. The former documents efforts to support and empower Congolese survivors of rape and sexual assault that were spearheaded by, among others, activist and playwright Eve Ensler. The latter is a fictionalized account of the women's suffrage movement in Switzerland, where "divine order" was used to justify women's lack of the vote until the early 1970s.

On the other side of the gender spectrum are the American drama Welcome to the Men's Group and the South African/German/Dutch/French documentary The Wound (Inxeba). Both address masculine rituals — a monthly support group in the former case and a coming-of-age circumcision ceremony in the latter — with dramatically different results.

Locally made cinema is also amply represented, with new offerings from several notable Vermont documentarians. A Band Called Death codirector Mark Covino returns with The Crest, an exploration of surfing and Irish heritage. Veteran Marlboro filmmakers Alan Dater and Lisa Merton offer a critique of biomass power called Burned: Are Trees the Next Coal? And Jon Erickson ("Bloom") codirected Waking the Sleeping Giant: The Making of a Political Revolution, about the recent rebirth of progressivism.

The launch of the Vermont Archive Movie Project — a searchable database of Vermont film, sponsored by VTIFF — will be celebrated with a reception and the screening of a sampler from the archive, including footage of late poet Ruth Stone introduced by filmmaker Nora Jacobson.

Opening the fest is Faces Places, the latest — and maybe last — work of Belgian-born cinematic bulwark and fiercely adorable octogenarian Agnès Varda. Categorized as a "hybrid doc," the film follows Varda and the 34-year-old artist known as JR across the French countryside in search of subjects and installation sites.

That's but a taste of this year's offerings; if your interest is piqued, get your hands on the festival guide (which is also online), and get yourself to the movies.