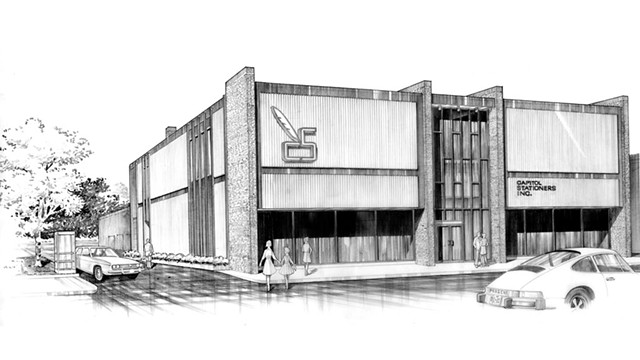 The midcentury architects who brought a modern, Bauhaus-influenced aesthetic to Vermont can be counted on two hands. Perhaps not by accident, two came from Barre: Marcel Beaudin (1929-) and Donald McKnight (1933-2020).

Architectural drawings and other records of both of those architects' long careers are or soon will be available to the public. McKnight's drawings were recently archived at the Vermont Historical Society, and Beaudin's papers, once sorted, will be added to the Jack and Shirley Silver Special Collections Library at the University of Vermont.

Beaudin, who is 91 and lives in Shelburne, and McKnight, who died in April, had separate and quite different careers; Beaudin mentioned in a recent phone call that he hadn't seen McKnight in "more than 30 years."

But their origins are remarkably similar.

As students, they overlapped at Spaulding High School, where Beaudin dated McKnight's older sister. Both attended the town's night school for art and design run by seasoned granite artisans, becoming skilled draftsmen in the process. And both began their careers in Barre's monuments industry, where their fathers worked.

Vermont state architectural historian Devin Colman, who initiated the preservation of the two architects' papers and found repositories for them, attributed the men's similar paths to the cultural moment of their youth.

"What a neat place Barre must have been when the monuments industry was going gangbusters!" he mused during a phone call. "It had all those artists and draftsmen and highly skilled artisans. It had an art school. It seems like [it was] the Florence, Italy, of Vermont. Don and Marcel started in that world. It got their creative juices flowing."

McKnight went on to become a self-taught, licensed architect in his hometown. Beaudin earned an architecture degree at Pratt Institute before opening his office in 1959; it was based in Chittenden County for most of its run.

Beaudin, who said he "reluctantly" closed his Shelburne office in 2018 and officially retired at 90, designed about 1,000 projects over his career. (His list for the archive is 59 pages long.) His entrée into the world of clean, stark, purposeful Bauhausian design was unexpectedly direct.

As a junior monuments designer in New York City after high school, Beaudin had a chance meeting with famed Swiss modern architect Le Corbusier, who was then at work on the United Nations building. While at Pratt, he worked for a few weeks as a renderer for Marcel Breuer, one of the original Bauhaus instructors who immigrated to the U.S. after the Nazis closed the German school. And he spent a college summer working for Edward Larrabee Barnes, the modernist who would later design the Cathedral of the Immaculate Conception in downtown Burlington.

Many of Beaudin's works, particularly some 200 residences, reflect that immersion in modern influences. This reporter's own Burlington house, the Forgays Residence, is a boxy International-style double-decker completed in 1965 that's often mistaken for a motel. The 1959 Haywood Residence down the street is a classier predecessor. 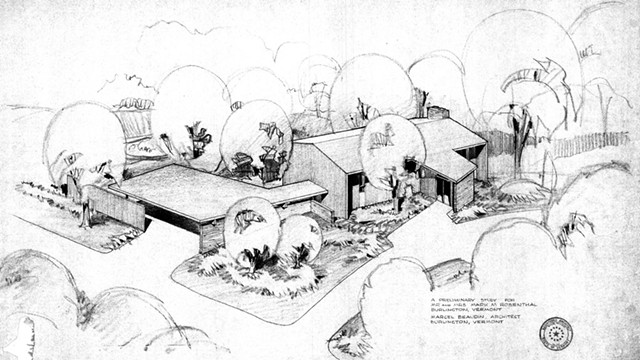 A few blocks away, Beaudin's Rosenthal Residence, built in 1964, has an attached carport and distinctly modern massing oriented on a corner lot that overlooks a ravine in back.

Teal and Tyler Doggett were living in Barcelona in 2015 when they purchased the Rosenthal Residence the "hour" it went on the market, Teal said in a phone interview. It has remained largely unchanged except for two additions that Beaudin himself designed in 1987 and 1994. Inside, Teal said, there are "so many built-ins, it's almost like living on a ship."

Beaudin was, in fact, a passionate sailor; he designed the net-zero Lake Champlain Community Sailing Center that was completed in 2019. Another career highlight was the Trinity College chapel (1958), which once had a stained-glass wall made in Chartres, France. ("The chapel was magnificent, I must say," Beaudin recalled; the University of Vermont owns it now.) He also designed All Saints' Episcopal Church in South Burlington (1963) and the Vermont Veterans Memorial Chapel in Randolph Center (1996).

These and many more projects were featured in a 2005 retrospective at the BCA Center: "Decades of Design: Marcel Beaudin."

McKnight, by contrast, had no exposure to Bauhaus masters, yet his aesthetic leaned the same way. Colman suggested that McKnight gleaned his influences from magazines and "what Freeman French Freeman was doing at the time." The Burlington firm, founded in 1937 by Ruth and Bill Freeman, was the first to bring the modern movement to Vermont.

"Maybe it shows just how pervasive and strong that modernist influence was — and is — within the architecture profession," Colman added.

McKnight practiced from the early 1970s to 2009; the archive comprises 800 drawings from 270 projects, of which 110 are residences. While Beaudin had 10 employees at the height of his practice, McKnight had only one, for five years: architect Jules Chatot, who joined him in 1980 after studying at McGill University.

Chatot, who is 68 and lives in Danville, recalled his boss introducing him to Beaudin as someone who provided McKnight with his introduction to Burlington architects. The city was then the center of architectural practice in Vermont and "a very small club," Chatot said. McKnight learned the profession informally from Eugene Alexander (of Alexander & Truex, which eventually became TruexCullins) and Fred Senftleber of Freeman French Freeman.

As Beaudin recalled, McKnight "did an outstanding thing: He worked with an accredited architect for five or seven years, and then took the four-day architectural licensing exam. He passed it on the first round [in 1972]. Don was a really bright guy. I've never known anyone before or since who's done that." 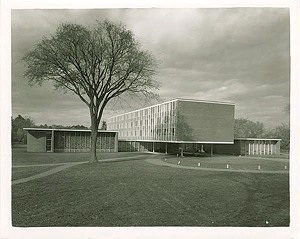 Calling McKnight's drawings "really beautiful," Paul Carnahan, the Vermont Historical Society librarian, said the architect designed for "the movers and shakers of Barre and, to a lesser extent, Montpelier — people in granite and business." McKnight's more modern projects include the 1974 Capitol Stationers on Main Street and the 1980 North Barre Manor, a 120-unit HUD-funded high-rise with an innovative, non-orthogonal floor plan.

But the most modern of McKnight's projects was the Barre house and detached office he designed for himself, with Chatot, in 1981. Its two flat-roofed pavilions are joined by an elevated domed walkway and reached via a small bridge over a stream that McKnight redirected to form a trout pond. (He loved fishing and hunting.) The interior features beautiful built-ins, mirrors covering selected walls and the heavy dining table that McKnight designed with chrome-plated tubular legs that match a chrome support pole nearby.

In pristine condition, the house went on the market in 2019. Broker Michael Calcagni, a McKnight enthusiast whose father was friends with the architect, said he had "17 showings in a week," offers from several architects and a winning bid that went "way over the asking price." When Calcagni gave Colman a special showing, the broker mentioned drawings stored in the house and office flat files, prompting the historian to arrange their transfer.

McKnight's other house designs aren't nearly as Bauhausian; many are traditional colonials and capes. "I don't think all of his clients necessarily appreciated his modernist bent," Carnahan commented.

Clients Nancy and Bob Pope wanted a two-story colonial, but McKnight "pushed us a little down the modernist path," Bob said. Their residence is a 1990 contemporary structure with a slot-windowed cylinder on the façade that houses the stairs. The Popes made only one change to the design: childproofing a second-story overlook to the dining room below. McKnight, who never had children, insisted that keeping the children away was simply "a matter of discipline," Nancy recalled.

Colman noted that drawings like McKnight's and Beaudin's are increasingly rare. The papers of discontinued solo practices typically end up in the dumpster, and most architects have moved to digital renderings. Drawings, though, Colman said, show "the evolution of a design. You see inside the brain of the architect."

Those of Beaudin and McKnight, he added, are "a document of not only their careers but of architecture and design in Vermont and New England at a specific time: what they're reading and seeing and how that shows up in the Vermont landscape."

The Donald McKnight papers can be viewed by appointment at the Vermont Historical Society, 60 Washington St., Barre, 479-8500. vermonthistory.org