Vermont in the Spotlight 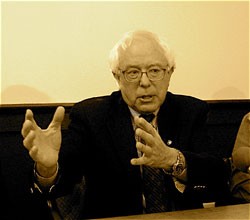 The snow is falling — a record accumulation for February — and the excitement is building as Vermont’s March 4 Town Meeting Day approaches. For the first time in memory, the Green Mountain State’s little presidential primary is in the national mix. Yours truly even got a phone call from a Time magazine reporter this week who was suddenly curious about the unique traits of Vermont’s political scene.

And though U.S. Sen. Bernie Sanders is not publicly endorsing a candidate in next Tuesday’s Democratic Primary, he assured “Inside Track” he’ll be “actively and enthusiastically campaigning” for whomever the Democratic Party nominee is — Barack Obama or Hillary Clinton.

“Lieberman is going to be actively working for McCain,” said Sanders. “I will be working for the Democratic nominee and making the case to millions of Independents throughout this country and in the state of Vermont that, from an Independent perspective, either Obama or Clinton will be by far the superior candidate. That’s kind of the role that I am going to be playing.”

Amazing to see where that 10-vote upset victory in the 1981 Burlington mayor’s race has taken him, eh?

From his travels around the state during the congressional recess, Sanders told us, “People are furious about George W. Bush and what a terribly bad president he has been. And they are chafing at the bit in order to undo the damage that this man has done to our country. There’s a tremendous amount of energy in Vermont and throughout this country to move America in a very, very different direction.”

Who would have imagined 20 years ago, asked Ol’ Bernardo (at the time he was in his fourth term as mayor of Burlington), “that we’d be talking about a woman and an African-American guy” running for president?

“The world changes and sometimes things change very quickly,” said Sen. Sanders, “and I think we may be at a point, what is called a transformational point, in American history where the people of this country in large numbers really, really, really want to move America in a very different direction. This may be the moment.”

Ol’ Bernardo said he will be focusing on an area that doesn’t get a whole lot of attention or discussion in the national media, “that we are spending $12 billion — that’s billion with a ‘b’ — $12 billion a month on the war in Iraq.” And the Bush administration’s defense budget, he noted, is currently pegged at $515 billion. It’s being paid for, said the Vermonter with the trademark Brooklyn accent, by our children and grandchildren, while the wealthiest among us have gotten tax breaks from the Bush administration and ExxonMobil just posted a record $40 billion annual profit!

And what about that other Indepen-dent? The one who tossed his hat into the presidential race on Sunday morning’s “Meet the Press” — Ralph Nader?

“To be honest with you,” said Ol’ Bernardo, “I think Nader’s role in this campaign will be insignificant, unless he is propped up by the Republicans — Republican money and Republican support.”

Bernie said we should not forget that eight years ago, “It was Ralph Nader who told us there was no difference between George W. Bush and Al Gore. I don’t think there’s anybody in America who believes that now.”

Mr. Nader “is not going to have a significant role in the campaign,” predicted Sanders.

Polls are showing, he noted, that the American people understand our disastrous trade policy has cost millions of good-paying jobs. They understand the severity of global warming, and they understand the war in Iraq has been counterproductive in the struggle against international terrorism.

“The people are way ahead of Washington,” Sanders said.

Clinton vs. Obama — Picked up the telephone during dinnertime on Monday, and on the other end of the line was the recorded voice of the former Democratic Governor of Vermont, Madeleine Kunin!

House Speaker Gaye Symington has also endorsed Hillary, wife of Bill. Both have acknowledged that candidate Clinton’s gender is an important factor in their support, though they also argue she’s the best qualified.

One cannot help but sense the old feminist fire in their political/social genes, reminders of the women’s liberation movement of the 1970s and 1980s. Yes, we have come a long way, baby. Sisterhood is indeed powerful, and the fact that the gender of the candidates in the Democratic Primary is not a factor for so many women proves it.

Like Madeleine Kunin, Kathy Hoyt was a feminist trailblazer in the world of politics, too. We take it for granted today, but there was a time when women were rare in positions of political power.

Hoyt served as Vermont Commissioner of Employment and Training under Gov. Kunin in the 1980s, and also was Queen Madeleine’s last chief of staff. And on Tuesday, Hoyt went public with her enthusiastic support for Barack Obama.

Hoyt described the Tuesday kickoff, via a statewide conference call, of “Women for Obama” in Vermont as “a sign of growth in women’s empowerment.” Hoyt told “Inside Track” that she would “love to see a woman president someday, but I don’t think Hillary is the right person.”

A Hillary Clinton presidency, were she to win, said Hoyt, would be a return to “the old politics” and “the politics of division.” Hoyt, who also served as chief of staff under Gov. Howard Dean, described the Clinton campaign as “harking back to the 1990s and running on a legacy of Bill Clinton’s administration.” And that, she said, “is not where we are in the country right now.”

Hoyt’s a native of North Carolina and a veteran of the civil-rights struggle that dominated the South during the 1960s. The first president she voted for was John F. Kennedy in 1960. Hoyt told yours truly the Obama for President Campaign has stirred up some of those vibes from the ’60s and the New Frontier Days that JFK inspired prior to his assassination on November 22, 1963.

“I get so excited,” said Hoyt, “because I see this guy Obama being able to reach over and work with other groups to really change the way things get done.”

Clearly, the momentum appears to be building behind Obama as we head to next Tuesday’s primaries in Ohio, Texas, Rhode Island and Vermont. If Obama carries both Texas and Ohio, most pundits say the writing is on the wall for the Clinton campaign.

“Hopefully, if that happens,” said Hoyt, “the Clintons will understand that in order to preserve their dignity and the accomplishments of the Clinton administration, they’ll back out.”

Welchie told “Inside Track” this week that Barack Obama is “turning the page on the past 10 to 15 years of the politics of personal destruction, and a politics that said the government’s the enemy.” There’s a new sense of hope, said Welch.

Also, he noted, “Obama was against the war from the beginning, and people are desperate to have a new U.S. image in the world. Obama, I think, embodies that,” said Rep. Welch.

And let’s not forget U.S. Sen. Patrick Leahy’s enthusiastic support for Barack Obama. By now, many have heard the radio spot for the Obama campaign that he cut with his darling wife, Marcelle Leahy.

“Change we can believe in,” is what the Leahys call him.

The only question is, how large will his Vermont landslide victory be, eh?

Statehouse Pot War? — Democratic Senate President Pro Tem Peter Shumlin calls it “a teeny little baby step compared to where we should be going,” but the Vermont Senate’s passage of a bill that would decriminalize marijuana possession is a step in the right direction.

All we did, said Sen. Shumlin, was pass a bill that makes the “green books” — the current state statutes — reflect what happens if one gets caught with a small amount of pot by law enforcement now.

“Today, if you get caught with an ounce or less, you do not go to prison,” he said.

Under the bill passed by the Vermont Senate, “You’ll go to diversion and have no criminal record for your first two offenses,” said Shummy.

There are all sorts of legal substances, from tobacco to alcohol to Ritalin or Oxycontin, that can be purchased in stores right here in Vermont, noted Shumlin, “but if you smoke a joint, that’s illegal.”

He made those remarks on the recent broadcast of “Point-Counterpoint,” appearing with Republican State Senator and Essex County State’s Attorney Vince Illuzzi.

Vince the Prince argued that the current criminal statute doesn’t need changing, since current practice in Vermont is not to seek jail time for minor pot possession.

“The system is failing so miserably that our communities, parents, police and law enforcement don’t know what to do,” said the Senate’s top Democrat, once mentioned as a possible gubernatorial candidate.

“We’re losing the battle against substance abuse in this state from Bennington to Burlington and everywhere in between,” he said.

“We don’t want to send the wrong message to our children. Best thing we can do is be honest with them. What children look for is consistency. And right now our laws are so out of whack that it is very confusing.”

Guv Watch 2008 — There’s still no Democrat in Vermont’s gubernatorial race. The only announced challenger to three-term GOP incumbent Jim Douglas is Progressive Anthony Pollina. In fact, Pollina came out of the bushes this week to hold a Statehouse presser, and he ripped into Gov. Scissorhands’ proposed budget with a little more fire than we’ve heard from the Democrats so far.

Peter Galbraith, the only Democrat known to be “seriously considering” a candidacy, was unseen this past week.

Meanwhile, leading Democrats such as Shumlin and Welch continue to insist their party will have a “strong” candidate running for governor this fall. Unfortunately, they are unable to supply any names to back it up.

Shumlin even goes so far as to say that when their “strong” Democrat candidate pops up, “I think that Anthony Pollina at that point will see the light, recognize that, while he’s a very articulate and thoughtful person, there’s no way that he’s going to be elected the next governor of the State of Vermont.”

Informed of Shumlin’s remark, Pollina told “Inside Track” he’d like “to remind Shummy the Progressives already have a very strong candidate for governor who is gaining support among those who call themselves Democrats, and Independents as well.”

And Tony the Prog made it clear he’s “a strong candidate.”

Pollina said he’d been out there “working hard and talking to people, and a lot of the people I talk to are Democrats.” And, said the Progressive Party candidate, “They’re quite supportive.”