Even the most fervent fans of the historic Vermont common cracker tend not to zealously defend its deliciousness.

The round, puffy, white crackers are about the diameter of a silver dollar, plain tasting and very dry. Their utilitarian origin as a simple, long-lasting carbohydrate dates back to 19th-century New England, when they were typically sold by the scoopful from a wooden barrel.

According to an exhibit at the Vermont History Museum in Montpelier, by 1884 at least 10 bakers from Brattleboro to Morrisville produced millions of common crackers annually. Almost a century later, the last of Vermont's original cracker bakeries, Cross Baking of Montpelier, closed for good.

But the state's common cracker has endured, now baked and sold by the Weston-based Vermont Country Store. Its survival is a testament to the memories it evokes for many, who continue to crumble crackers into chowder, fold them into holiday stuffing and pair them with cheddar.

For those curious about this no-frills food of yesteryear and its historic context, the Montpelier Historical Society's exhibit hosted at the state historical society's museum is worth a visit. It may even inspire visitors to drop $17.95 on a decorative 14-ounce tin of common crackers in the gift store.

Two men with deep cracker connections created the exhibit. Montpelier Historical Society chair George Edson's family owned Cross Baking, which closed after 152 years in 1980 when he was the company's general manager. His collaborator, Bob Mills, worked for Cross Baking for many years and then for Vermont Country Store after it bought the shuttered bakery's equipment.

The exhibit features a 1981 Yankee magazine article quote from Vermont Country Store cofounder Vrest Orton: "A barrel of crackers was the symbol of the country store ... therefore it seems most fitting that the first restored country store in rural America should be making crackers."

Vrest's son, Lyman Orton, co-owner of the Vermont Country Store, declined to share sales figures but wrote by email that cracker orders remain "amazingly" steady. However, the business is not very profitable, he explained. "Our manufacturing is antiquated to say the least." He and his father "rescued the business because it is such an iconic Vermont product," Orton wrote. "Pride, history, and stubbornness drive our decision to continue with them."

The exhibit includes a video of cracker production at the Vermont Country Store, one barrel and many 19th-century wooden cracker boxes. Other memorabilia include Cross Baking advertisement printing plates, Edson's grandfather's handwritten ledger, and a facsimile bowl of crackers and milk, a common way people used to eat common crackers.

For Edson, 78, the exhibit was a passion project that paid homage to his family and allowed him to dig into and expand upon his father's extensive archives, he said during a recent museum visit. 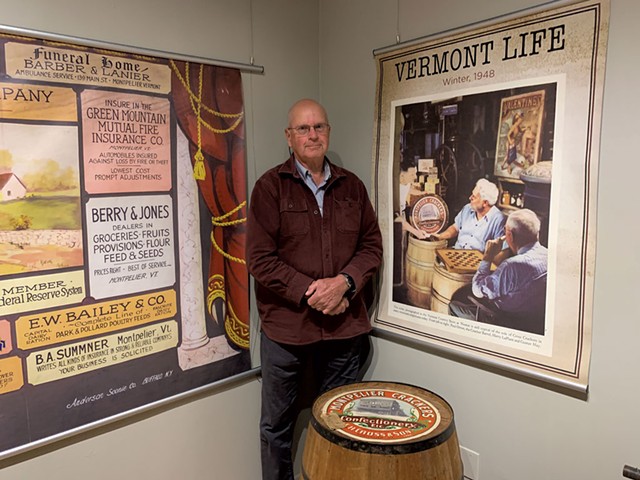 He was happy to include an original illustration by political cartoonist Jeff Danziger depicting a Cross Baking cracker box repurposed to hold firewood, as well as a recipe from Vermont's favorite apocryphal country cook, Mrs. Appleyard, aka Louise Andrews Kent of Brookline, Mass., who summered in Calais. When making souffléed crackers, she advised, "There is no use making them if you are not going to be reckless with butter."

Edson said his family mostly enjoyed crackers in soup. "I wouldn't eat corn chowder without them," he declared. He also remembers relishing them warm with cheese and bacon bits.

The crackers are not necessarily suited to modern tastes, Edson conceded. "They're kind of a first cousin of hardtack," he said, referring to the dense, dry crackers that resisted mold and kept sailors from starving. He recounted a tradition in which schoolkids competed to see who could manage to whistle after gobbling down the mouth-drying crackers.

Students from Twinfield Union School were on a museum field trip during this reporter's visit. None was familiar with the crackers, but a pair appeared engaged by the video of Vermont Country Store staff making them.

In the lunch area, a few youngsters agreed to try them. Henry, 9, said he liked the crunch. Lance, 9, wrinkled his nose. "They're bad, actually," he said.

"Common Cracker: The Exhibit" is at the Vermont History Museum, 109 State St., in Montpelier through January 28. $5-7. vermonthistory.org