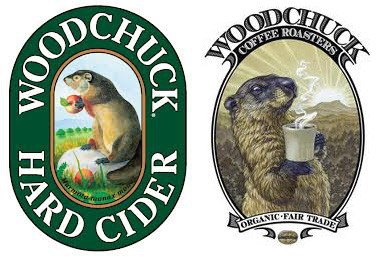 Maybe it was inevitable that a Vermont brand would get big enough to feel the need to defend its trade name against smaller, in-state brethren. So it is with Vermont Hard Cider Company, maker of Woodchuck Hard Cider, which last week filed a complaint in U.S. District Court seeking an injunction and monetary damages against the owners of South Burlington’s Woodchuck Coffee Roasters.

In the complaint, Vermont Hard Cider — which is registered in Delaware but has its headquarters in Middlebury — is described as having invested a “substantial” amount of money in building the brand name it has held since 1991. Not only do the name and furry rodent adorn its cider bottles, but they appear on products as diverse as key chains, playing cards, lip balm, umbrellas, suspenders and even “hydropacks,” according to the complaint.

Brothers Tony and Jim Basiliere founded Woodchuck Coffee Roasters in January 2011. “Both Jim and I are fifth-generation Vermonters,” Tony explains. “When I was a kid, it [the term ‘woodchuck’] was a slight, but we’ve now embraced it. It reflects our values as true Vermonters.”

Tony Basiliere says he did a thorough search for other coffee companies that shared the name; when the Vermont secretary of state approved it, he assumed he and his brother were in the clear. Yet, a few months later, he received a call from VHC CEO Bret Williams offering an unspecified sum in exchange for a new moniker. “He invited us to tour the plant, and offered to help us out with the cost of changing the name,” Basiliere says.

The Basilieres held their ground until they grew tired of the requests and decided to take VHC’s offer, Tony Basiliere says. But the parties couldn’t agree on an amount, and Basiliere forgot about the dispute — until, that is, a “very nice” sheriff showed up at his door with the official complaint.

Nate Formalarie, communications manager for VHC, declined to discuss the complaint’s details. “We wish it didn’t come to this, but we’re trying to do the right thing,” he says. “We tried to work with them over the course of a hefty amount of time.”

While Tony Basiliere might have been willing to back down earlier this year, he no longer sees conceding as an option. “I’m going to fight it in principle,” he says.