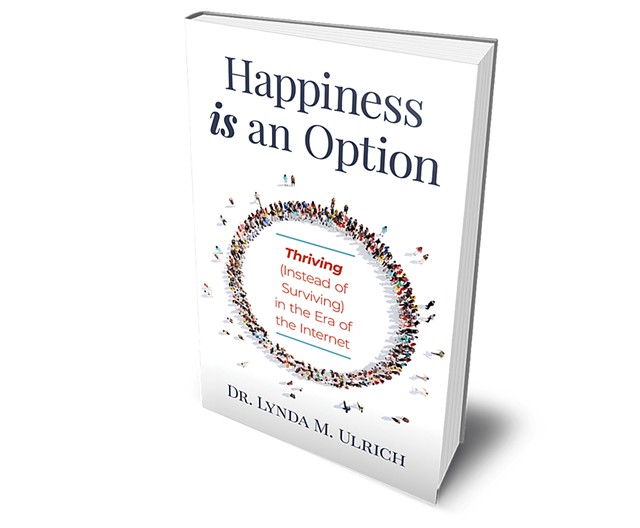 From the start of the pandemic, this space has been dedicated to positive stories. This week, it's about someone who's written the book on tales of kindness — literally.

Fairfield resident Lynda Ulrich is the brains behind Ever Widening Circles, a website with millions of followers that publishes only good news. That's right — no politics, no coronavirus death tallies, no police shootings. Since March, Ulrich said, readership has tripled, a sure sign that in these heavy times people are yearning for something lighter.

That's the concept behind Ulrich's new book, Happiness Is an Option: Thriving (Instead of Surviving) in the Era of the Internet, which came out on Tuesday. She makes the case that internet users can shape what's published online by being intentional about what they read.

"If we were a little bit more in tune and paused just for a second before we click on things, we can click the meaningless and just the plain mean into obscurity," Ulrich said.

That's not to say Ulrich is anti-news. She considers herself well-informed and believes people should stay up-to-date on current events. But often, what trends on Twitter or catches fire on Facebook is stuff that plays on fears and insecurities, she noted. On Ever Widening Circles, the website Ulrich launched in 2014 and now runs with a small staff that includes her daughter, the top stories examine whether walking has "the power to save lives and uplift communities" and reveal that "the world's first 'rock star' isn't who you think!" (Spoiler: It's the classical pianist Franz Liszt, who made it big in the 1840s.)

Ulrich's book tells similar stories, some of which were among the 2,000 published on her website to date. There's the tale of the innovator who used old cellphones to try to stop illegal logging in the rain forest, and the analysis of why single moms make the best game wardens in the African bush.

Those are stories Ulrich wants people to read.

"We can have more joy and less fear," she said, "and a brighter future."

The original print version of this article was headlined "Choosing Happiness"

802 Much Ever Widening Circles Lynda Ulrich Happiness Is an Option