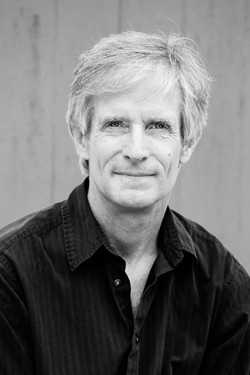 Gnudi — the plump, flour-bolstered ravioli fillings without pasta coverings — have established a strong presence in U.S. restaurants over the past decade. They may sound like a trendy twist on gnocchi, perhaps conceived by Mario Batali. But, says food expert Ed Behr, gnudi were actually invented in the 13th century. “They seem hardly to be pasta at all, and yet in Italy they’re always regarded as pasta and are considered the forebear of it,” the St. Johnsbury author writes in his new book 50 Foods: The Essentials of Good Taste.

Even the most food-knowledgeable readers will learn plenty of fun facts from the author best known for his quarterly magazine The Art of Eating. But 50 Foods shouldn’t be confused with a trivia book. Behr has produced a highly detailed treatise on how to enjoy the finer things in life, as useful to a chef as it might be to an alien dropped on Earth who is hearing about beef and potatoes for the first time.

Behr offers no recipes in 50 Foods. (There are plenty of those in his The Art of Eating Cookbook: Essential Recipes From the First 25 Years.) Yet practically every page brims with suggestions on the best ways to enjoy each ingredient, with topics ranging from making chestnuts into marrons glacés or castagnaccio to harvesting, buying, cleaning and storing lettuce. (Behr cheekily recommends storing a just-picked head in the refrigerator for a week to replicate “supermarket” lettuce.)

It’s no surprise to see a Vermont food writer displaying expertise in fresh cream or green beans, which Behr grows at home. But how did he become an expert on caviar and raw oysters? Grueling research — or perhaps not so grueling. “On and off, I have done a certain amount of blind tastings — not even blind tastings; thoughtful tastings,” says Behr, who’s conducted experiments such as comparing pasteurized with nonpasteurized caviar.

To school himself in other delicacies, such as oysters, he relied on years of travel to the source, including trips to the coast of Maine to meet farmers raising spat. Frequent visits to France and Italy have made Behr a recognized authority on cheeses, and five of his “50 foods” are European fromages, including Roquefort and Munster. (Though he’s an aficionado of Vermont cheddar, it didn’t make the cut.)

It was while living in Vermont that the New York-born, Washington, D.C.-bred writer began developing his gustatory expertise. A college dropout, Behr came to St. Johnsbury to take advantage of the cheap land for sale in 1973. He worked as a carpenter, but over the years the desire to “find something more intellectually challenging” inspired him to turn to food.

Behr bought a local building in which to open a restaurant and attended a New York culinary program, but he eventually changed his mind about the viability of fine dining in that time and place. After selling the building, he says, he was at loose ends until he seized on the idea of starting a “food letter.”

Behr began producing a black-and-white, eight-page newsletter, following the path of his journalist father. Twenty-seven years later, The Art of Eating is still print based and filled with art and recipes that have made back issues fodder for eBay.

Behr has had plenty of time to hone his writing skills and his palate. He says 50 Foods has been a separate 10-year project: He accumulated the information slowly, then, last year, focused on the book while running his magazine and completing occasional freelance assignments.

When his book tour for 50 Foods ends, Behr will continue his work on two more books, collections of essays on France and Italy. While he is passionate about the subject matter, he doesn’t have the hopes for those books that he does for the current one. “I’d like to think this is the most substantial, enduring food book that will be published this year. This is my magnum opus — I’ve even used those words,” Behr says. “It’s the big, commercial idea. If I have another best seller, it will be a steamy novel.”

Clearly, Behr has some big ideas about what we eat. We sat down at his St. Johnsbury dinner table to learn more about his artistry there and in the kitchen.

SEVEN DAYS: Have you always loved to eat?

ED BEHR: I was always interested in food. When I was 10 years old, my grandmother gave me a frying pan and a spatula for my birthday. I still have the frying pan. I don’t know what happened to the spatula, but it was around a long time.

SD: What was Vermont food like when you moved to St. Johnsbury in 1973?

EB: The Northeast Kingdom of Vermont was not a food area in 1973. There was game — it was a big thing. And it was kind of a culture of cheddar cheese. There was a certain appreciation for dairy.

The quality of home cooking was mixed, shall we say. People made yeast doughnuts with lard they had rendered. And there was an appreciation of maple syrup tasting different [when it came] from different people. It was certainly not organized. There was no balanced sense of great raw materials.

SD: How have your tastes changed since you started The Art of Eating in 1986?

EB: I don’t think they’ve changed, but I think I’ve become more aware of them. While I love really rustic food, and I tend to cook slightly unrefined food, the food I respect most and [that] I think I’ve realized I’m very appreciative of is very refined food, and the amount of skill and talent that refined food represents in a luxury restaurant.

On the other hand, I’ve become more conscious, in the other direction, [of] how tough it is to find somebody who cooks in a more rustic environment and knows it well, when you consider that [such an environment is] disappearing in Western culture and people will eventually lose a feeling for what it is.

SD: Do you feel limited eating in the Northeast Kingdom?

EB: People say, “You must order a lot of food.” [In] one of the earlier pieces [I did for The Art of Eating], I was really interested in goat’s-milk cheese and went to the south of France to do that. It was fairly humble travel, a lot of going to markets and seeing what the cheeses were and seeing the cheese maker afterward or at that time. At one point long ago, I was interested in pizza. I went to Naples realizing that’s where to go. We don’t eat out in Vermont very often.

SD: If you wrote a version of the book just about Vermont, what would be your top five foods?

EB: Definitely heavy cream. Green beans from my garden — boiled. We bought some exquisite frozen pork chops at the St. Johnsbury farmers market from Tamworth pigs. They were from some guy — Yankee Chicken Coop or something [Yankee Coop, owned by Jeff and Jeanne Nummelin] is his real business. I’ll go out on a limb and say Champlain Valley McIntosh [apples]. I think you have to say Vermont cheddar — wonderful clothbound cheddar. It’s no use doing a side-by-side taste test; it would give itself away. And I think you could come up with another five with equal claim.

SD: What is the most essential of the 50 foods?

EB: I once said in a risk-taking moment that if I had to choose between giving up wine or olive oil, I would give up wine. I don’t know if that’s really true, but I did say it.

SD: Your 50 choices lean toward France and Italy. Do you like other world cuisines, too?

EB: It is a very Euro book. It’s a true observation. It’s a fair criticism. My defense would be [that] you can’t know all the world’s food well. What’s lacking in the world these days more than in the past is a point of view, and this book has one. I don’t think you can write with as much feeling if you’re just really an omnivore in that cultural kind of way.

EB: I don’t think you should have guilty pleasures. I eat vast amounts of butter and cream. I’m blessed with good genetics and low cholesterol. The doctor, when he got my cholesterol back, wrote me a note that said, “Dear Mr. Behr, Your cholesterol levels are enviable.”

Too much cream is my guilty pleasure, preferably raw. The whole thing about raw cream is you don’t want to cook it — then it’s not raw anymore.

I would use it for anything you would use cream for — raw and liquid, gloppy or whipped. I’ve also cultured it.

SD: Are there any foods you can’t stand?

EB: I’m really not fond of peanut butter cookies. It is the peanut/sweet thing — peanut butter frosting, peanut butter cake … There are very few things I don’t like — only three or four. I like almost everything, but people are always saying, “You’re so picky.” But I’ll eat many more things than [they] will. I just want them to be good.