Cannabis edibles get a bad rap. Homemade versions with unknown dosing and delayed effects have caused enough unfortunate experiences to keep many folks away from unmarked trays of brownies at parties.

But, as Vermont prepares for the legal retail cannabis market to launch on Saturday, October 1, it's no surprise that some of the state's talented food and drink producers are preparing to enter the budding industry. In a state obsessed with farm-to-table fare, developing recipes with locally grown cannabis is a logical next step. And, with strict regulations governing dosing, testing and labeling, these aren't your stoner friend's mystery edibles.

We talked with some local food and beverage purveyors about how they're preparing to enter the adult-use market, from licensing and sourcing to switching from regular baked goods to cannabis-infused edibles.

The license for Fog Valley Farm, Bruhl's cannabis edibles business, was approved at a Vermont Cannabis Control Board meeting on August 31, along with those of two others: Family Tree Cannabis and Dalen. Last week, the state approved a fourth manufacturer, X-Tract Vermont.

Fog Valley Farm is named for the road on which Bruhl's family lives in New Haven, where the 22-year-old baker launched her business in the spring.

Over the summer, Bruhl tested her large-scale baking skills, making custom cakes and selling pies, cookies and other treats at the Shelburne Farmers Market. Now that she's licensed to manufacture cannabis edibles, Bruhl will shut down the "regular baked goods" part of her biz and move into a commercial kitchen in Middlebury. (Cannabis processing and non-cannabis food processing cannot happen in the same facility, per the Vermont Department of Health.)

Bruhl hopes to have a simple line of single-bite, small-tetrahydrocannabinol (THC)-dose cookies and caramels — and eventually ice cream — at one or two retail locations by mid- to late October. Her base recipes for chocolate chip cookies; lemon drop shortbread cookies; and dark, light and sea-salted caramels are ready, but she's still working on sourcing cannabis flower from licensed growers. Once she has that, she'll make infused butter and baked goods and send them to the lab for testing.

Bruhl bakes with traditional cannabutter, which she cooks using a butter-infusing machine. The result is pretty potent, Bruhl said, so she doesn't have to use a ton to reach her target dose of five milligrams per serving. That keeps the cannabis flavor from being overwhelming in the final cookie or caramel, and the hint that remains plays well with notes of vanilla.

"It's nice, because it doesn't smell that much when you're baking them. It just smells like cookies," Bruhl said. The decarboxylation process — which converts tetrahydrocannabinolic acid in the cannabis plant into THC using heat, unlocking its high-causing compounds — does smell. But she'll have to do that only once a week, before she makes the cannabutter.

Bruhl's great-grandmother was a talented home baker, and her skills were handed down through the family. When recreational cannabis became legal in Vermont, Bruhl's mom started playing around with edibles. For Christmas, Bruhl gave her two cannabis cookbooks with recipe titles such as Whoopie Highs — "just because the titles were hilarious and they looked really fun," she said.

As the adult-use market approached, Bruhl saw potential in a small-batch edible biz — especially one focused on low-potency baked goods made with local ingredients. She currently sources from Cabot, King Arthur Baking and Monument Farms.

The young entrepreneur had expert help in navigating the licensing process from Dave Silberman, an attorney who specializes in cannabis businesses and co-owns one of the first licensed dispensaries in Vermont, Middlebury's FLŌRA Cannabis. The control board prioritized Fog Valley Farm because, as a woman-owned business, it met the criteria for an economic empowerment applicant.

As she gets Fog Valley Farm's edibles rolling, Bruhl hopes to build a business that supports women in the cannabis industry.

"I think people could overlook me because I'm a woman and because I'm young," she said. "But [I'll have] one of the only products on the market, [so] they'll have to pay attention." 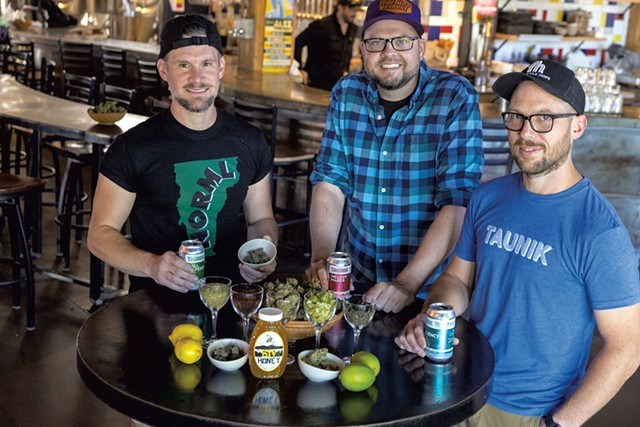 Bob Grim and Todd Haire love to tackle agricultural experiments. With the rest of the Foam Brewers team, the brewers-turned-farmers brought a Hinesburg vineyard back to life in 2020 and released their first Natural Hack wine in February of this year.

In 2019, Grim and Haire tried their hands at growing organic-certified hemp, planting five acres at Grim's parents' house in Alburgh. It was a challenging year for hemp farmers — even the experienced ones — with heavy rains and cold temperatures until June, followed by a blistering hot, dry summer.

They threw a big harvest party; Shawn Rice, who had helped with the farming, blasted music from his massive DJ setup. That night, they screened a horror movie in the middle of the field.

Then the hemp market bottomed out. Rather than sell for pennies on the dollar, Haire and Grim packaged their harvest in humidity-controlled, breathable hemp sacks and put it into cold storage while they figured out how to transform it into a value-added product.

In 2022, Taunik was born, with sparkling, tea-based CBD beverages that hit the market in June, on tap at Foam and in cans around the state. It's a separate business from Foam, though the team of Grim, Haire, artist and creative director Rice, brewer Josh Bayer, and packaging pro Steve Gourley connected through their work at the brewery.

They make their carbonated, 50-milligram CBD drinks with a water-soluble nanoemulsion, adding it to various combinations of tea, hemp flower, citra hops, botanicals and Vermont honey. Taunik currently offers three "transcendent cannabis elixirs": Melody Maker, a black tea with sumac; Fine Frequency, a combination of yerba maté and lemon; and Call of Peaks, a green tea with lime and peppermint. 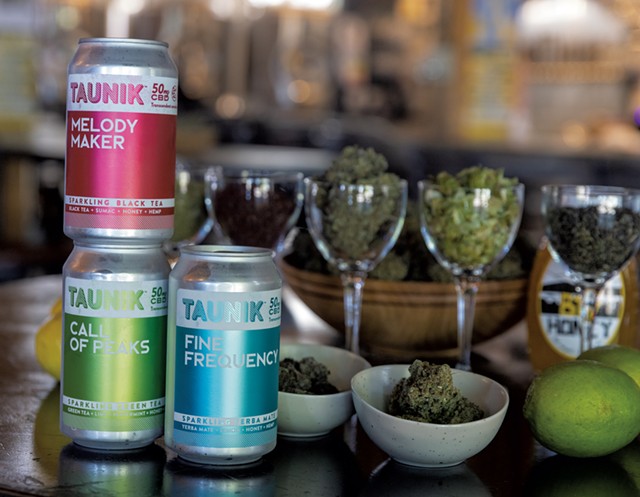 Taunik's cans are now in more than 20 retail outlets around the state, and the team has brewed its second large-scale batch. They're a tasty addition to the local CBD beverage market — but they're also a test of sorts. The Taunik team has received prequalification approval from the control board for a tier 3 manufacturer's license, which permits the highest number of extraction methods. Once that license is issued, they plan to launch a separate, THC-infused beverage brand, currently registered under the name Drink Taunik, as soon as possible.

The earliest could be a month from the adult-use market's October 1 start date. First, all of the licenses in the supply chain, from the growers' to the extraction lab's to Taunik's, must be approved and in hand.

Once the stars align, the actual brewing will be quick.

"It's a different mindset," Grim added.

Like the CBD beverages, the THC-infused drinks will be made with a water-soluble nanoemulsion — just with different active components. Taunik will offer a range of drinks and dosages, including a "sessionable," lower-potency 2.5-milligram option. (According to control board guidance, manufacturers of consumable THC products must "include the number of 5 milligram or less servings in the package up to a maximum of 50 milligrams per package," and the servings must be "easy for consumers to measure.")

"Our market would be people that want an alternative to alcohol at social gatherings but still want something more than soda or nonalcoholic beer," Grim said. "They're participating in partaking, but in a different way."

The effects of THC-infused beverages made with nanoemulsions tend to hit faster than those of traditional edibles, Grim said — and to fade faster. That's ideal for consumers looking to control their experience in a social setting.

Using a beer metaphor, Grim compared a two-milligram drink to a light, low-alcohol pilsner and the higher THC-content drinks to a double IPA. His team hopes to keep the pricing comparable to beer, too.

Cannabis beverages have been popular in other states where the substance is legal; even megabreweries such as Lagunitas Brewing and Pabst Blue Ribbon sell nonalcoholic THC seltzers. Cannabis research agency Brightfield Group predicts above-average market growth for cannabis drinks through 2027.

The Taunik team hopes to help foster that trend in Vermont, using as many locally grown ingredients as possible.

"Beverages have been huge and successful on the West Coast," Rice said. "We're very antsy to find out how they'll work here."

Other familiar figures in Vermont's beverage scene are taking a different approach to the retail cannabis market: Wait and THC.

The team at Black Flannel Brewing & Distilling is no stranger to cannabis terpenes. Similar aromatic compounds are found in hops, one of beer's basic ingredients. The brewery also collaborates on a beer called Magic Disco with its Essex Experience neighbor Magic Mann, a maker of CBD products. It's an infusion of Black Flannel's flagship New England IPA, Disco Montage, with Magic Mann's Cherry Pie terpenes.

"Think of it as sprinkling salt on your food," he said. "It's accentuating, elevating and amplifying what's already there from the hops, then supporting [it] with some additional flavors."

The brewery released the first batch of Magic Disco on draft on April 20 (that is, 4/20), and it sold out fast. A new keg is ready to celebrate on October 1.

"We're a beverage manufacturer. That's what we do well." Chris Kesler tweet this

Will Black Flannel ever manufacture THC drinks? Product innovation is nothing new for the brewery, which has been on the forefront of ready-to-drink canned cocktails in Vermont. And, while he described himself as not a regular cannabis consumer, Kesler has advocated for cannabis legalization for decades and sees potential in the adult-use market.

The Black Flannel team would have to set up a separately licensed company to make anything THC-infused, Kesler noted. That's "something we're looking at," he said, and they'll reevaluate the possibility three to six months down the road.

"We're a beverage manufacturer. That's what we do well," Kesler said. "If we can figure out the formulas for infusing THC into a nonalcoholic product and make it taste great — and do it in a specific, controlled dosing, just like we do with alcohol — then I think there's a definite possibility."

Over at Rookie's Root Beer, owners Dave and Jenny Rooke have been waiting a long time to release a cannabis-infused soda. They even have a product developed: the Grateful Elixir, a version of their lemon mapleade with a long-lasting, full-spectrum cannabis infusion. (They'll keep the root beer for the kids, Dave said.)

But the Rookes aren't jumping into the THC arena. They already took on a new business this year: Whoa Nellie! Kettle Corn. They've had a busy summer selling popcorn at festivals and sending their staple Rookie's products to restaurants and bars around the state.

The cannabis product would "be another great thing for us to juggle in there," Dave said. First, though, he wants to see lines at the dispensaries for a full six months.

"I'm ready to turn the switch, but it's a matter of letting the big guys gamble a little bit," Dave said. "I don't know if I'm going to be able to compete with them, or who's going to survive."

Will Vermont's population support its small food and drink producers as they get into the cannabis game? And will tourists from nearby legal cannabis states spend their money at Vermont's dispensaries?