By Melissa Pasanen and Jordan Barry 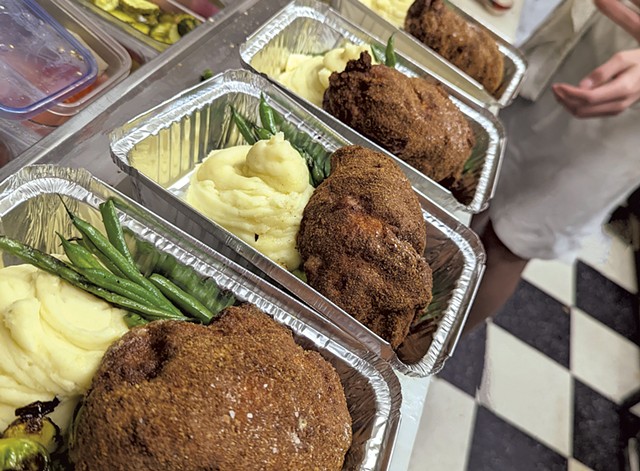 When Maryam Counter first heard news of the Russian invasion of Ukraine, her heart sank, like that of so many people around the world. But for Counter, who co-owns Good Times Café in Hinesburg with her husband, Travis, worry about the conflict is multilayered.

Counter came to the U.S. from her native Russia on a student work visa 16 years ago and stayed when she met and married Travis. But, she said, "All my family is still back in Russia."

She also runs a French-style macaron business called Matryoshka's Bakery out of the family's St. George home. It is named for the Russian word for the iconic wooden nesting dolls.

On February 28, Counter posted on Matryoshka's Instagram account that she was raising money to support UNICEF efforts to help Ukrainians. "I'm scared to share this," Counter wrote, "but it has been eating me alive that I'm not doing anything to help children and families affected by the war in Ukraine as [a] Russian who is against it."

Her fear, Counter explained to Seven Days, was about the reaction back home. "Not all of my friends and family [in Russia] approved," she said. "They are told different news than us here."

Her seven-day fundraiser generated more than $6,500 in donations, including "$12 from an 8-year-old who wanted to help Ukrainian children," Counter said. The baker had incentivized donations of more than $100 with a free dozen macarons; she said she now owes donors in Vermont and beyond more than 700 macarons.

Counter is one of many Vermont food and drink entrepreneurs who have launched fundraisers to help Ukraine. 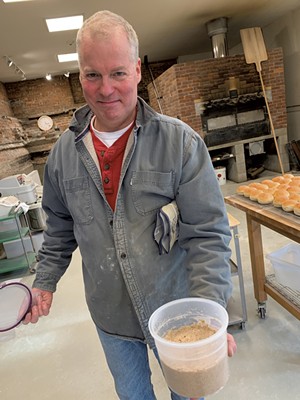 In Barre, Ukrainian native Larissa Haas, co-owner with her husband, Jim, of the bakery operation at Rise Up Bakery, has launched a GoFundMe with a goal of $15,000 to send essentials such as hygiene products, clothes, food, first aid and medications to Ukraine.

Many restaurants and food establishments are donating a portion of sales to World Central Kitchen, a nonprofit that has so far provided more than a million meals to Ukrainians impacted by the conflict. Participating Vermont businesses include Canteen Creemee in Waitsfield, Barrio Bakery in Burlington, and Mad Taco locations in Essex, Middlebury, Montpelier and Waitsfield. South Burlington home-based bakery Hole in One Mini-Donuts will donate 50 percent of this week's preorder sales to World Central Kitchen.

In addition, the Sweet Spot in Waitsfield will offer a Ukrainian dinner on Wednesday, March 16, and profits will go to the nonprofit Razom for Ukraine.

If the news from Ukraine has you wanting to drown your sorrows in cheese curd- and gravy-topped fries or throw back a shot and swear a bunch, Craftsbury's Blackbird Bistro encourages both. $5 from every Fuck Putin shot and $4 from each order of poutine — made with Sweet Rowen Farmstead cheese curds — goes to the restaurant's Fuck Putin Eat Poutine fund, which will send weekly donations to UNICEF.

The ongoing fundraiser's first night on March 10 was "a heartwarming evening," Blackbird owner Lee Kinsey told Seven Days, with "lots of profanities shared amongst the crowd, directed at President Putin."

On March 5, Beverage Warehouse owner Jennifer Swiatek put out a call on the Winooski liquor outlet's Facebook page for Vermont breweries to create blue-and-yellow cans to raise money for Ukraine.

The first brewery signed on within minutes, and the effort has grown to four breweries, a cidery and a pickle company as of press time.

Cans from Four Quarters Brewing, Good Measure Brewing, Lucy & Howe Brewing, 1st Republic Brewing and Eden Specialty Ciders — along with jars of pickles from the Tipsy Pickle — will start to hit the shelves at the end of March.

"I had no doubt when I posted looking for help from Vermont breweries that it would be answered," Swiatek said. "We have a remarkable community, just as the people in Ukraine do."

Some of the cans were already in the works as part of global brewing fundraisers. Good Measure is brewing the Resolve, an open-source collaboration beer spearheaded by 42 North Brewing in East Aurora, N.Y., and 2085 Brewery in Kyiv, Ukraine. Pravda Brewery in Lviv, Ukraine, has switched to making Molotov cocktails, but it collaborated with Federation of Beer to start the international Brew for Ukraine effort. Four Quarters will use its Putin Huylo can art. (The name roughly translates to "Putin is a dickhead.")

Swiatek just wants the other businesses to use packaging that helps raise awareness. "I don't care if they wrap it in blue and yellow painter's tape," she said.

"Vermonters love to drink beer," Swiatek said. "If they can drink beer for good, it's a powerful thing."