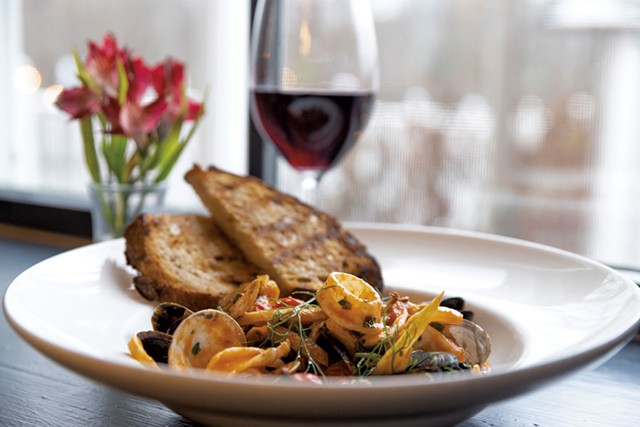 In July, when Chelsea Morgan and Tom D'Angelo announced their plans to open Vermont Fine in Richmond, the chef-owners explained that the name is a playful attempt to sum up the state's unofficial dress code: a flannel shirt and a Carhartt jacket.

"You can come here right off the farm," Morgan told Seven Days at the time.

Since the couple opened Vermont Fine in early October, all kinds of folks have stopped in to check out what they've done with the former Kitchen Table Bistro — local farmers included, D'Angelo said.

The historic brick building, visible from Interstate 89, was home to the Kitchen Table for 19 years, until November 2021, when chef-owners Lara and Steve Atkins closed their farm-to-table destination restaurant and put it on the market — building, assets, name and all. This summer, Morgan, 33, and D'Angelo, 36, purchased it with the support of investors.

"We're just trying to put our flair on things." Tom D'Angelo tweet this

Now the young married couple are following in the Atkinses' footsteps, working side by side in the kitchen as co-chefs. They're well aware that they have big shoes to fill. But they're putting their own spin on the restaurant, with casual service and signature dishes drawn from their extensive experience in the industry.

And, while their restaurant may be called Vermont Fine, Morgan and D'Angelo don't call what they offer "fine dining."

"I like to say we have finer food with a more approachable feel," Morgan said.

Both chefs were fixtures of the Burlington restaurant scene, with nearly 40 years of combined experience in the industry. After moving to Vermont from New Jersey, D'Angelo got a job at the Farmhouse Tap & Grill and worked his way up to head chef at the Farmhouse Group's El Cortijo. Later, he worked under Frank Pace at the Great Northern. Morgan was head chef at Sorriso Bistro, a short-lived Italian spot that opened in South Burlington in late 2018. She also cooked at Hen of the Wood, Mule Bar, Junior's Rustico and Splash at the Boathouse.

Now, in a restaurant that is fully their own, the couple have assembled a team of friends and former coworkers from Butter, the Farmhouse and Hen of the Wood — plus a former Kitchen Table employee or two.

"When you work in the industry, you think of all the people you'd call if you ever were to open a restaurant," Morgan said. "The industry has changed, and a lot of the people on my dream team have moved on to do their own things. But we have great people behind us."

When my in-laws, my husband and I walked in to claim our Friday evening reservation, the restaurant felt as approachable as D'Angelo and Morgan said they hoped it would. Staff members were warm and efficient in welcoming and seating us, with no formality or stuffiness.

Morgan and D'Angelo have retained the Kitchen Table's cozy, multiroom farmhouse layout. Not much has changed in the interior beyond new bluish-gray trim, a repainted bathroom, linen-covered tables replacing wood tops and new local art. Metal signs made by Rebecca Chomyn of VT Steel hang above the door to each of the three main dining rooms, now named Maple, Garnet and Clover after Vermont's state symbols. The Maple room features a photo of Jenne Farm in Reading, where Morgan grew up.

We dined in the Clover room, a smaller space with mostly two-top tables, and had it to ourselves for most of our meal, thanks to the early hour. Even when people filled the tables nearby, the room remained quiet enough for our group of five to chat easily rather than shout over the standard restaurant drone. 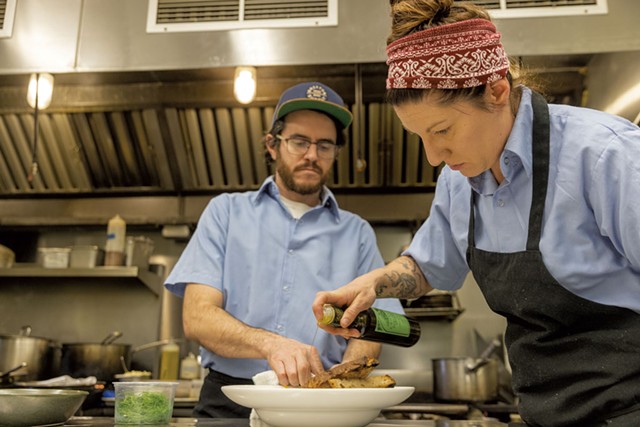 The multiroom setup "gives us the chance to be busy without it being overwhelming or loud," D'Angelo said.

"And each room has a different vibe," Morgan added, noting that they often seat families with kids near the kitchen in the Maple room, leaving the smaller spaces for date-night diners.

We started with drinks: Hill Farmstead Brewery's Edward for my husband and brother-in-law, Whirligig Brewing's Sour Bunnies! for me, and glasses of rosé and pinot noir for my mother- and father-in-law. The bar also offers cocktails, which Morgan said have proved popular.

I don't often get to visit a new restaurant with a larger group, and dining with four people is a great way to try most of a menu in one trip. We started with Vermont Fine's Caesar salad ($11) and poached pear and beet salad ($13), the latter featuring beets from Jericho Settlers Farm and Jasper Hill Farm's Bayley Hazen Blue cheese. From the "share" section, we chose ginger-cider mussels ($19) and sausage and pierogi ($17).

The pierogi dish is something D'Angelo and Morgan often cook for themselves for dinner, the couple said. Made from scratch, the pillowy pierogi are stuffed with potato and Cabot cheddar, then served with housemade maple-garlic sausage, broccoli-stem sauerkraut and pickled mustard seeds.

Cider-steamed mussels were a beloved staple of the Kitchen Table menu; Morgan said customers were asking for the dish even before they opened. They complied, but with a twist: While Kitchen Table's mussels were steamed in fresh cider and served with smoked bacon and aioli, Vermont Fine boozes the bivalves up with hard Stowe Cider and swaps the bacon for housemade sausage.

"Every chef has their own recipe," D'Angelo said. "Even though we bought the recipes with the [Kitchen Table] business, we're just trying to put our flair on things."

We mopped up the broth with perfectly grilled pieces of bread from Red Hen Baking — and I ripped off a corner to swipe through the remains of the pierogi plate.

The generously portioned main courses all rang up at less than $30 — a rarity these days as consumers feel the increased costs of restaurant ingredients and operations. We each chose something different. Our server praised our adventurousness, saying it's "more fun that way."

I was drawn to the braised LaPlatte River Angus Farm beef ($26) served on smooth, rich polenta with cider-braised greens from Jericho Settlers Farm. The hearty yet tender dish is exactly the sort of thing I want to eat as the weather gets cold and darkness falls before 5 p.m.

My husband ordered the pork chop ($28), which came stunningly seared with sweet, maple-glazed carrots and crispy fingerling potatoes. My mother-in-law opted for the house burger ($19): Boyden Farm beef, Cabot cheddar, big slabs of North Country Smokehouse bacon, dijonnaise and arugula on a nicely toasted bun with a choice of fries or greens.

Despite eating most of the mussels, my father-in-law hadn't gotten enough seafood for the evening; he ordered the cioppino ($28). The Italian American fish stew, one of Morgan's recipes from her Sorriso days, was loaded with fresh scallops, mussels, clams and calamari from Wood Mountain Fish.

The cioppino and braised beef have been top sellers so far, D'Angelo said. Another popular dish is the sage tortellini ($25) with butternut squash from 1000 Stone Farm, kale, candied pepitas and apple gastrique. The pasta is hand-rolled. My brother-in-law was smart enough to order it, and everyone was jealous when the stunning, colorful dish arrived.

Like Kitchen Table, Vermont Fine gives menu credit to the many farms from which it sources. Some of those farmers and producers supplied the former restaurant, while others are ones with whom D'Angelo and Morgan have worked for years. Next season, they hope to expand their roster of suppliers and grow their own produce on a plot on their investors' land — supplementing the extensive herb and flower gardens that Lara planted over the years on the restaurant property.

I'd eaten too much over the course of the meal to dwell on dessert. But, as our server dropped the menu on the table, I remembered that Vermont Fine's pastry chef is Sarah Howley, owner of Only Cannoli. To entice Howley — Morgan's "dream pastry chef," she said— to join the team, the couple offered to let her use their kitchen space to produce cannoli for her own business.

We considered ordering everything on the dessert menu — including the Florentine bowl featuring Howley's cannoli filling — before settling on the lemon-cranberry tart ($12), s'mores entremet ($12), and several scoops of housemade chocolate and vanilla ice cream.

Each was plated beautifully, but the entremet was a showstopper. The gluten-free treat consisted of a fluffy chocolate mousse cake on a housemade Oreo equivalent, fully enrobed in a torched "campfire" meringue. I devoured it.

My mother-in-law, who spent years working in restaurants and can occasionally be a tougher food critic than I am, called the dark chocolate ice cream "the best I've ever had."

From service to mussels to dessert, Vermont Fine holds up to its predecessor's reputation while forging its own identity. You'll be sure to catch me there again as D'Angelo and Morgan continue to settle in — flannel and all.