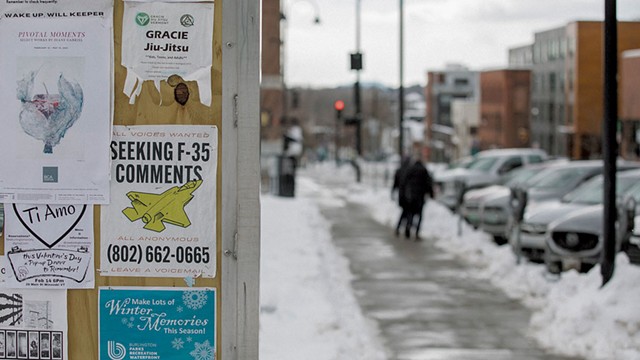 The callers are variously angry, sad, resigned, fearful. They report babies being woken from naps, dogs being frightened, blood pressure rising, houses shaking, peace shattered. One lone caller suggests we should just get over it. "You really think you're going to go up against the military or the National Guard? Fucking good luck."

They're all talking, of course, about F-35 jets, which have been roaring to and from the Vermont Air National Guard base at Burlington International Airport since October 2019. The comments were recorded for "Jet Line: Voicemails From the Flight Path," a 12-minute documentary created by Patrick McCormack, 31, and Duane Peterson III, 27. The film will premiere virtually on April 15, to be followed by a live discussion.

More than 100 callers responded, McCormack said, to a flyer the filmmakers distributed in recent months in Chittenden County. It announced, in bold type, "SEEKING F-35 COMMENTS" above a line drawing of the fighter jet. "All voices wanted, all anonymous," the flyer promised. "Leave a voicemail."

This "hotline" was the pandemic-era alternative to in-person interviews, McCormack explained. Peterson added that the filmmakers thought locals would be more inclined to share their thoughts candidly if they could do so anonymously.

"We felt there was a story not being told," McCormack said. "A lot of people who called in were pleading with us to listen to them."

He noted that the comments included in the film represent the exact ratio of positive to negative responses the hotline received. The filmmakers' goal, he said, was simply to document the local community's experience living with the jets, and their decibels, over the past year and a half.

"We didn't know what to expect" from the queries, McCormack said. "We tried to make the advertising as neutral as possible."

Yet the responses tipped the scale; about 95 percent of the callers were unhappy with the jets, he said. Accordingly, the film — which begins with the sound of an unseen F-35 taking off — has a decidedly oppositional flavor. The comments are heard over images of quotidian life in otherwise tranquil residential neighborhoods.

In a written statement, the filmmakers describe "Jet Line" as "a poetic portrait of a community plagued by war machines, documenting untenable conditions in a small city once voted one of the best places to live in America."

McCormack and Peterson have amassed two and a half hours of audio recordings — an archive they intend to make available — but wanted to make a short film that would be "digestible" and accessible to viewers. Indeed, those 12 minutes do the job. Asked why they didn't include any narration, McCormack replied, "This isn't our story to tell. The fact-based arguments have already been made ... It's about our neighbors."

Similarly, they made a conscious decision not to show an F-35 in the film. "This isn't about what the planes look like," Peterson said. "It's about the visceral experiences of the people living with them. And [the planes'] image carries a lot of baggage."

In addition to the local showing next week, the filmmakers aim to present "Jet Line" in other cities scheduled to get the F-35s. "We got our first call from Madison last night," McCormack said. The planes are expected to begin arriving in the Wisconsin capital in 2023. "We feel that those communities deserve to know what it's like to live in the flight path."

The filmmakers also intend to enter the short in independent film festivals.

McCormack and Peterson, both of whom studied filmmaking in college, cocurated the Climate Action Film Festival, which was held virtually last month and presented by SunCommon. McCormack is on staff as a "storyteller" and photographer at the Waterbury-based solar company; Peterson is the son of founder and copresident Duane Peterson.

But creating "Jet Line" was an independent pursuit, McCormack emphasized. "This is very much a weekend effort for me," he said.

A subtler but core theme of the film, McCormack posited, is empathy. "People believe these jets are 'the sound of freedom,'" he said. "Another goal of 'Jet Line' is to open the idea that some people have a different idea of freedom. Some of their neighbors feel differently."

"Jet Line: Voicemails From the Flight Path" premieres on Thursday, April 15, 7 p.m., with discussion following. Free. Details and registration on Eventbrite or jetlinefilm.com.

The original print version of this article was headlined "Flight Patterns"