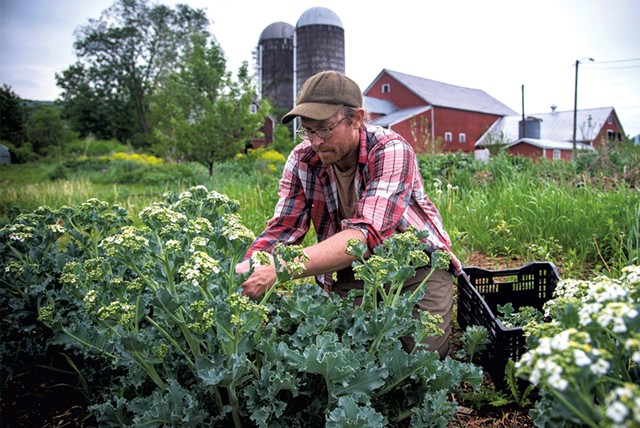 Most of the vegetables we eat are annuals. Examples include carrots, lettuce and broccoli, which are planted year after year from seed or as seedlings.

Perennial vegetables, on the other hand, are planted only once. They might take a few years to yield a full harvest, but then, as their name indicates, they keep producing for a good long time. They go dormant in the winter and come back every spring. Think asparagus and rhubarb (yes, that's technically a vegetable).

Beyond the obvious benefits perennials offer — delicious homegrown produce weeks before Vermonters dare plant tender seedlings outside — they've been gathering momentum recently for other reasons, such as the climate crisis.

Rachel Kane has owned a plant nursery and tea garden in East Hardwick for 40 years. This year, she changed its name from Perennial Pleasures to Summersweet Gardens Nursery at Perennial Pleasures, but the switch doesn't imply diminished emphasis on perennials.

Over the last five years, Kane said, she's seen significant growth in customer demand for perennials. "It's happening," she said. "People want to get away from the whole [practice of] tilling and disturbing the soil. Some perceive it as better for the ecosystem."

As for mitigation, the less the soil is disturbed, the more carbon it can sequester, so it helps to grow plants that do not require repeated tilling and planting.

The challenge when it comes to vegetables, specifically, is that there aren't many popular perennial options. But Unangst-Rufenacht and fellow farmer-researcher Aaron Guman are working to change that.

On an unseasonably hot May afternoon at the Farm Between in Jeffersonville, Guman knelt down by a row of about 30 sea kale plants. The farm, which John and Nancy Hayden stewarded for 30 years, was sold in October 2020 and now operates as a satellite campus for Craftsbury's Sterling College. The college is using the property as a hands-on classroom and will continue the Haydens' work cultivating a perennial polyculture and refuge for native pollinators.

"Perennial vegetables are a thing, and a select number of them are very tasty." Aaron Guman tweet this

The blue-gray leaves of each sea kale plant formed a bushy bouquet with slender, broccoli-like florets. A bite of tender leaf hit the palate first with sweetness and then a pleasant bitterness. The florets tasted very similar to young broccoli.

"This is one of the biggest plantings of sea kale in North America," Guman said, spelling out the botanical name: Crambe maritima. "It's popular in permaculture circles with the nerds. But it's not in your local farmers market," he added, laughing. (In fact, it can be hard to find in local nurseries, as well.)

The plant is a brassica and related to both broccoli and kale, as well as broccoli rabe, with which it shares its bitter edge.

"It's native to the seacoast of the British Isles," Guman explained. "It's been eaten for a very long time." 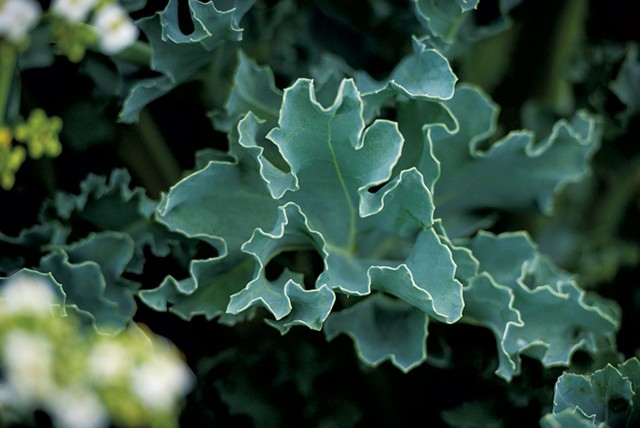 The plants were started four years ago after Unangst-Rufenacht, 38, and Guman, 33, landed a pair of U.S. Department of Agriculture grants totaling around $35,000 to explore the potential of three lesser-known perennial vegetables they hoped might intrigue farmers and chefs, as well as home cooks and gardeners.

"We want to raise awareness that perennial vegetables are a thing, and a select number of them are very tasty," Guman said.

It was during their edible landscaping days that the pair became excited about the potential of perennial vegetables. They were inspired by Eric Toensmeier, author of several books, including Perennial Vegetables: From Artichoke to Zuiki Taro, a Gardener's Guide to Over 100 Delicious, Easy-to-Grow Edibles (Chelsea Green Publishing, 2007). He is an adviser on their project, along with two research faculty from the University of Vermont Center for Sustainable Agriculture.

"We were both interested in carbon sequestration through food production," Guman said, "this idea that we could have gardens that are leaving the soil, ecosystem and planet better than we found them while also raising food that was nutritious, maybe even higher in nutrition than many of our cultivated vegetables."

In addition to the sea kale in Jeffersonville, the researchers have plots of it and two other perennials at East Hill Tree Farm in Plainfield. Some of their grant funds will be used to send plant samples to a New Jersey lab for nutrition analysis. They are also working on compiling a list of sources for starts and seeds, which are not widely available in Vermont. Kane of Summersweet Gardens Nursery, for example, has sold out of her Crambe maritima plants this spring.

Another of the research subjects — hostas — will be familiar to many gardeners, though not for culinary use. To eat them, you harvest the furled tips of the emerging leaves, Guman explained. "They taste like asparagus with a little bitterness," he said. "The deer are onto something, right?"

The challenge with hostas, they have found, is that their popularity as an ornamental makes buying them for food production less affordable.

The third plant is a leafy green the researchers call spinach vine, Hablitzia tamnoides. It's not to be confused with a tropical plant, Basella alba, which is also called Malabar spinach and sometimes spinach vine.

Unangst-Rufenacht and Guman believe sea kale has the most potential for its culinary appeal, ease of cultivation and propagation, and longevity. Toensmeier, who is based in Holyoke, Mass., has a 20-year-old planting of sea kale that is still going strong.

"They are very low maintenance once you get them established," Guman said. "These have not been watered since the first spring we planted them." 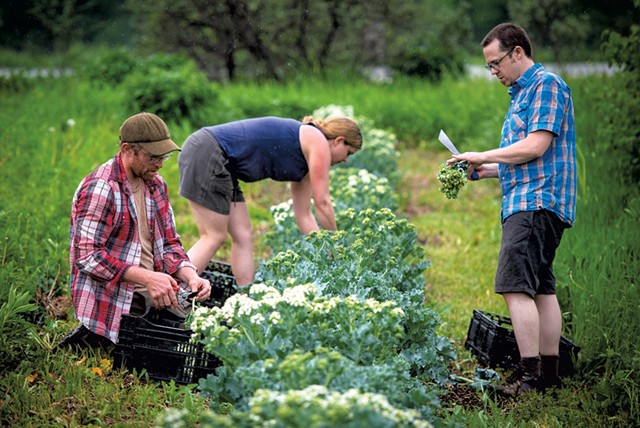 John Hayden, who has relocated to Maine with his wife, confirmed that the sea kale also seems unbothered by many of the common pests that cause problems for Brassicas. And when the sea kale flowered, he noticed that it attracted a diverse mix of pollinators including flies and small wasps. "It caters to a different crowd," he joked.

One important aspect of the project lost to the pandemic was on-farm events with chef tastings to help spread the word among farmers and restaurants about the perennial vegetables' potential.

This reporter can share that thinly sliced sea kale stems and whole florets sautéed up beautifully with slivered garlic, anchovies and red pepper flakes, served over pasta with a shower of Parmigiano. Larger lengths of stem with florets were also delicious roasted simply with slivered red onion, olive oil, and salt and pepper.

Spinach vine harvested from East Hill Tree Farm made for fine salads and worked well in an Indian-style curry and filling for an omelette but did not distinguish itself from any number of basic, leafy greens. Hosta tips were not sampled.

The researchers also delivered a significant amount of sea kale from Jeffersonville to Sterling College. The school's director of dining services, Elizabeth Chadwick, admitted that when she heard she would be receiving sea kale, she was not excited. "Kale fatigue is real," she said, laughing.

When she received the vegetable, Chadwick became much more enthusiastic. "It was good to see it looked a lot more like broccoli rabe," she said. "And when I bit into it, I was like, 'Heck, yeah!'"

The chef said she loved that the sea kale stalks were tender all the way down, which reduces waste. She appreciated the crunch and juiciness of the stalks and the light sweetness with a little bit of bitterness to balance. Though the produce had frothy white flowers, they didn't make the vegetable bitter the way flowering affects some other vegetables.

For her first recipe attempt (see below), Chadwick decided to lightly grill whole stems with florets and flowers intact and serve the sea kale with some caramelized onions and garlic, apple cider vinegar, a drizzle of maple syrup, and a generous grating of local cheese.

"It has so much integrity in its flavor, I didn't want to fuss with it too much," Chadwick said. "I would love to eat that every day." 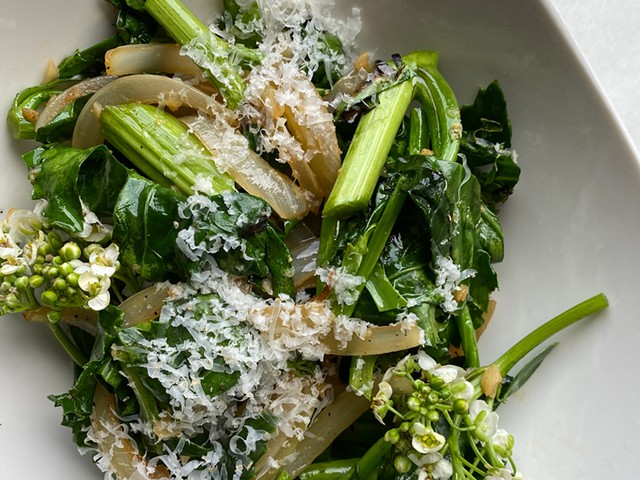 The original print version of this article was headlined "Perennial Promise | Vermont farmer-researchers explore the potential of low-maintenance, unfamiliar vegetables"