Comedians might be the saviors of humanity. OK, that's probably a stretch. But being able to laugh at the things in our lives that get us down — and inspiring others to do the same — is a great way to get some perspective and deal.

"It's almost like a shield of protection," said comedian Tina Friml during a recent call with fellow comedian Carmen Lagala and Seven Days. "It's the only defense mechanism that I have," Lagala added.

Friml and Lagala started their careers in Vermont, garnering considerable local acclaim and awards before moving to New York City. Lagala was a fixture in Burlington's comedy scene during its infancy a little over a decade ago, and Friml emerged shortly after the Vermont Comedy Club opened its doors in 2015.

Both comics have gotten national boosts in the last few years. Lagala made her TV debut on "The Late Show With Stephen Colbert" in 2018. Friml appeared on "The Drew Barrymore Show" in the summer of 2021.

Friml and Lagala perform on Friday and Saturday, November 19 and 20, at the Vermont Comedy Club in Burlington.

SEVEN DAYS: First of all, what's going on in your comedy careers?

TINA FRIML: I've really been trying to kind of get back into the New York scene. I moved out there right before COVID and had about four months, which is great. After COVID, I felt like I had to build all that momentum back up. I think that COVID really drove home the impermanency and the fragility of live entertainment. It really got me exploring different ways to take my comedy.

When I'm not doing shows in New York, I've gotten really into screenwriting. The script I'm working on is based off a bit that I do about being at a bar. It's really easy for bar staff to misinterpret me, because I have cerebral palsy. They think I'm on drugs or overserved or something like that.

CARMEN LAGALA: For me, finding a therapist. That's about it. And standup, a lot. I want to say it takes up all my time, but it takes up, like, an hour a night.

SD: Some say the world is becoming an increasingly humorless place. As comedians, how do you cope with seriousness in our culture?

TF: Last year, it was weird because I felt very insignificant. There were plenty of times where everything in the world and life seemed so bleak. Finding humor felt almost like a pitiful thing to do because the elephant in the room was just: Everything is bad.

I love the way John Mulaney put it, that comedians are the "last responders." We feel like we're the very last thing that people will need. And when I would express that, people would kind of double take and just say, "Are you freaking kidding me? You're the protector of sanity."

CL: I tend to dive headfirst into that hole of misery. When things are at their worst, I have to write a joke about it. Otherwise, I would kill myself.

I mean, this is pretty low stakes considering some things going on in the world, but I saw a pigeon die. And I had a whole panic attack just watching this pigeon die in front of me. And then I wrote a bit about it and performed it an hour and a half later — and that helped.

SD: What have you noticed about people reentering society after holing up for so long? Any new or funny behaviors?

TF: I never really came up with bits about the pandemic. It was almost too obvious. Every observation was just so in your face.

SD: What about audience behavior?

CL: For a while, they were really, really good and grateful to be back and hearing live performances. And now they've switched back to being exactly how they were before. That didn't take long at all.

TF: I second that. There was a little bit of time when they were like, "Whoa, comedy!" There were some audiences where I could tell that they've been sitting on their couches watching videos of comedy — great comedy, polished comedy. Every odd show, there would be an audience that was just very hard to impress. Either that or they were just not used to laughing out loud.

SD: Would you rather be in front of a live audience not laughing or at home, performing online to a crowd you might not even be able to see or hear?

SD: Which one makes you feel shittier?

CL: A live audience. With Zoom, it's almost like you're not performing. A lot of those performances are just like a person slowly losing their mind. It looks like somebody unraveling. I feel like I could get an Oscar for some of the performances I've done. It becomes an existential crisis for about 10 minutes. And then it's over, and you can turn it off and just forget that you did it. With a live audience, you can see their eyes.

TF: The nice thing about online comedy was that you could just go back to eating a cookie on your bed. But when you have a not-so-great set live, it's like, you have to find a way to get to the exit. 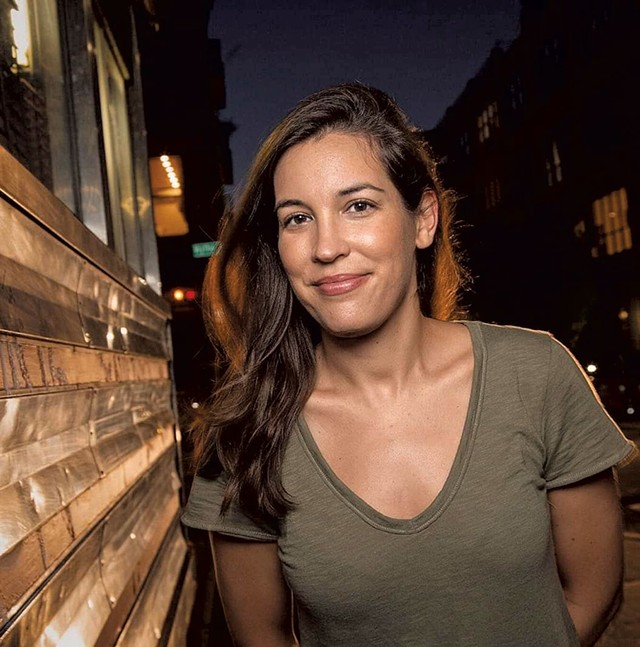 SD: Burlington seems like a great place to hone your skills before moving on to a bigger market like New York City's. What qualities of the Queen City scene make it that way?

CL: I think it's changed a lot since I came up. But I think something that stays true is that it is a very accepting scene and very accepting to the arts. There used to be not a lot of comedy going on. So I would go to music open mics and ask to do five minutes of standup. And they were always really accepting of that.

In Burlington, the people generally are much more patient than in New York City. Maybe you're not getting as better as fast because you're being coddled. But I needed that because I'm a baby. I would have quit immediately in New York City from all the negativity.

SD: And from quiet audiences not laughing.

TF: I'm always grateful to have had Burlington to grow up in as a comedian. The thing I often point to is: A lot of audiences in Burlington don't respond to — I hate to use the phrase — "shock humor" or incredibly dark humor. That's certainly a way to get a positive rise in New York. But in Vermont, that's not the case usually. I think Burlington audiences have a higher expectation of intelligence in humor.

CL: There's definitely an alt scene that is very much embraced in New York. I actually haven't seen them in a long time. I'm concerned about where they are.

SD: What's your least favorite holiday, and why?

SD: Have you ever performed on New Year's?

CL: I have. I've bombed on New Year's. One time, I came out at, like, 9 p.m., and I started doing the countdown. I was like, This is gonna kill; it'll be so funny because it's not midnight. And they were silent for the whole set.

TF: I hate Valentine's Day. It's not just the argument that it's capitalizing on love, although it is. It's just an unnecessary holiday. People who are in relationships or in love or whatever, they already have it good enough, OK?

I've always been in a bad mood on Valentine's Day. I think it's not that I don't like mushy-gushy things. It's almost like I'm counteracting the forceful mushy-gushiness by being a Scrooge. I'm like the Scrooge of Valentine's Day.

CL: I'm sorry, I have to keep going. New Year's Eve and that song that comes with it, "Auld Lange Syne," is terrible. I can't dance to it. Not a bop. Needs a remix. Awful.