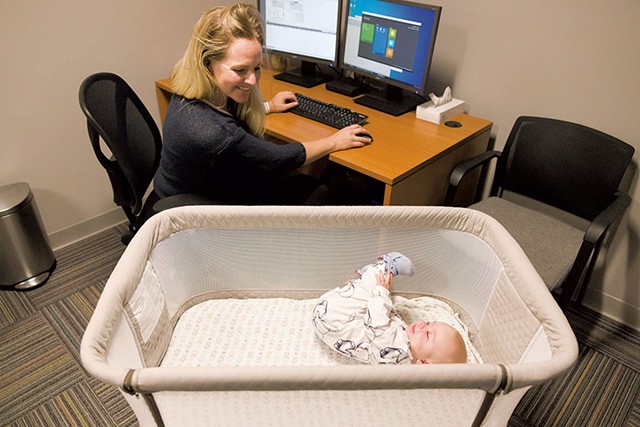 Two weeks before Meghan Archambault's maternity leave ended last spring, she received what she described as "a nice little surprise" from Twincraft Skincare, where she works as a lab technician.

Twincraft announced the launch of Babies at Work, a program that allows parents to bring children between the ages of 6 weeks and 6 months into the office. The company designated a room at its Essex and Winooski facilities, each with a sink, refrigerator, changing table, rocking chair and crib on wheels.

Archambault had intended to rely on her mother-in-law for childcare but welcomed the opportunity to bring little Mavis into work several days a week. On Mavis' first day in the office, the company's president scooped her up while Archambault searched for information on a computer. Twincraft also allowed her husband, who works remotely for a different company, to set up in the baby room so he could watch Mavis while Archambault attended meetings.

Mavis recently aged out of Babies at Work, but Archambault said the program greatly eased her transition back to the office. And she's grateful for the extra time she got to spend with her daughter.

"She just changed so much over those three months," Archambault said. "It was nice to have extended periods of time with her and not just see her in the mornings and evenings."

Twincraft, with 330 employees, is one of a handful of local companies that were committed to family-friendly policies before COVID-19 and are now leaning into and expanding those policies. Those businesses say the pandemic clarified just how much benefits such as paid parental leave, childcare subsidies and work flexibility are needed. Nationally, women have been leaving the workforce because childcare and work-life balance are both hard to find; in Vermont, a lack of workers has hampered recovery efforts. Companies employing these family-friendly workforce strategies say they experience fewer problems recruiting and retaining workers.

"The way we see it, we have no plans of selling Twincraft, so we're playing the long game of sustainability," said Michele Asch, vice president of leadership and organizational development for the family-owned company. "We see our strongest value is our employees."

Babies at Work, which has had four participants so far, is just the latest example of the firm's commitment to supporting families. Twincraft also offers three months of partially paid parental leave and smaller perks, including subsidized or free Intervale Community Farm shares, as well as tickets to holiday events and baseball games. In 2020, the business partnered with three other employers — Vermont Student Assistance Corporation, the City of South Burlington and Hickok & Boardman HR Intelligence — to fund a health care center that provides free primary and preventive care to employees and their dependent spouses.

Burlington-based Rhino Foods, a maker of wholesale frozen cookie dough with 250 employees, is also bolstering its family-friendly policies. For 10 years, Rhino has partnered with the United Way to offer the Working Bridges program. Twenty-two Vermont businesses, including Twincraft, use Working Bridges, which sends resource coordinators into workplaces to help employees navigate issues such as housing, transportation, finances, childcare and benefits. The program is paid for by employers using a fee-for-service model, with some philanthropic support. Though it's not designed specifically for working moms and dads, many of those who use the service are parents.

Because people spend many hours of their day in the workplace, it's an ideal place to offer help, said Connie Beal, United Way of Northwest Vermont's Working Bridges initiative director.

"It's a dignified way of helping in the moment and acknowledging that everyone, at some point of their lives, will need a connection, will need a resource," she said.

In June, in reaction to an increased need among employees, Rhino expanded Working Bridges to have a resource coordinator on-site 20 hours a week. Rhino's beefed-up program will allow the company to "test this hypothesis that those robust support services can help stabilize employees so they can be more focused here at work ... and get access to what they need," said Caitlin Goss, the company's director of people and culture. Goss believes that Working Bridges helps retain workers.

"It makes it a lot easier to have somebody here at work that can help with things that you may need." Angela Jenot tweet this

Angela Jenot, a batter maker who's worked at Rhino for two and a half years, said that her Working Bridges coordinator, Maia Hanron, with whom she meets several times a month, recently aided her search for childcare for her 2-year-old daughter. Hanron helped her fill out an application and printed paperwork, since Jenot doesn't have a computer or printer at home.

Jenot, a single mother of two, said she'll work next with Hanron on devising a plan to pay off her student loans.

"It makes it a lot easier to have somebody here at work that can help with things that you may need ... where you would [typically] have to leave work to be able to do that," said Jenot. Working Bridges enables her to take care of personal issues without having to take time off — "which definitely helps financially," Jenot added.

Goss said that while Rhino had been committed to supporting families long before COVID-19, the company doubled down on that support during the pandemic. Rhino partnered with the Edge Sports & Fitness to secure and subsidize childcare spots so employees' school-age children had a place to go on remote-learning days. And in the early stages of the pandemic, Rhino provided take-home meal kits and groceries, which meant one less trip to the grocery store for families, Goss said. In January, the company also began offering four to six weeks of fully paid parental leave, a policy employees had pushed for.

South Burlington apparel company Commando, which has a workforce that's 90 percent female, began offering Working Bridges during the pandemic. Human resources manager Amy LaShelle set up Chromebooks in conference rooms so workers could meet virtually with a resource coordinator once a week.

LaShelle said she highlights the availability of Working Bridges when she recruits new employees.

"It's a benefit and [lets] people know we do care and do understand that there are barriers and challenges that happen in life," LaShelle said.

Some employers, such as Alchemist cofounder and CEO Jen Kimmich and Runamok Maple owner Eric Sorkin, not only offer employees paid family leave but also have become advocates for a federal family leave program. Main Street Alliance of Vermont — a coalition of more than 700 small businesses that advocates for policy change — recently launched We Believe in Paid Leave, a campaign supporting the passage of a national paid family and medical leave law.

While Kimmich said the Alchemist's success has enabled the brewery to offer paid family leave, she pointed out that not every business — especially service-related ones such as restaurants and hotels — has the financial ability to provide it. According to the National Partnership for Women & Families, just 19 percent of U.S. workers have access to paid family leave.

Sorkin said Runamok's policies — such as paid family leave, flexible work hours and unlimited time off for salaried employees as long as they fulfill their work responsibilities — have served the organic maple syrup producer well during the COVID-19 crisis.

"If anything, [the pandemic] really reinforced our belief that flexibility is healthy for the organization," Sorkin said. "The demarcation for work and personal time has just been eroded over the last 10 to 20 years through technology ... and I just have always felt like the corollary of that has to be that people can take their personal stuff to work, as well." Sorkin said he's fine with employees shopping online, going to medical appointments or taking their cars in for service in the middle of the day, as long as they get their work done.

The 75-employee company is in the midst of another big project: establishing a childcare center at its Fairfax headquarters. Runamok is teaming with Next Generation, which runs five childcare centers in Chittenden and Franklin counties, to start a program that will be open to Runamok employees and the general public. Runamok will supply the space and handle things such as utilities and plowing, and Next Generation will set up and run the childcare center. It's a model Sorkin thinks could be replicated by other businesses that have unused space or land.

The center, which is scheduled to open next spring, will occupy a unique location: a half-million-gallon water tank formerly used for fire suppression.

Kimmich, of the Alchemist, doesn't provide on-site childcare, but she does reimburse parents of children under 5 for childcare — $26 per day for each day they work.

Kimmich said that pro-parent policies are brewed into the workplace culture of her beer business. The Stowe-based company offers 13 weeks of fully paid time off for birthing parents and five weeks for non-birthing parents — as well as paid vacation and sick days. All workers can take advantage of the company's organized activities, such as mindful meditation and yoga classes; in-house foot and back clinics treat workers' sore spots. During the pandemic, the Alchemist began covering employees' co-pays for mental health appointments to encourage them to seek help when needed.

Investing in her employees' well-being has resulted in minimal staff turnover. The Alchemist was able to hire additional staff this summer and is not facing a shortage of workers.

And though many Alchemist employees don't have children, they don't feel resentful of the parental perks because they "understand they're part of something bigger," Kimmich said. "Kids belong to all of us."

The original print version of this article was headlined "Company Benefits"