Vermont Documentarians Want to "Wake Up" Audiences — One at Sundance 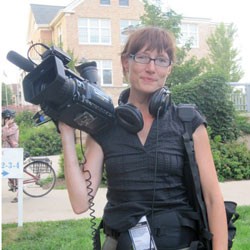 Two Vermont filmmakers could generate a lot of buzz at the Sundance Film Festival, which starts Thursday, January 19, in Park City, Utah.

On the narrative side, Burlington’s Colin Trevorrow is presenting his directorial effort Safety Not Guaranteed, a romantic comedy about a loner who may or may not be building a time-travel device. Indie favorites Aubrey Plaza and Mark Duplass star.

Then there’s the new documentary from Waitsfield resident Eugene Jarecki, who won Sundance’s Grand Jury prize in 2005 for his look at American militarism, Why We Fight. In The House I Live In, which premieres this Saturday at Sundance, Jarecki takes on an equally daunting topic: the war on drugs.

To get a grip on the phenomenon, Jarecki gathered footage in 25 states, he says in a phone interview — including Vermont, where he talked to a Burlington defense attorney and private eye working a drug-related case.

“Members of our staff described our project as the No Stone Unturned project,” Jarecki says. His objective was to cover all aspects of this fierce domestic conflict: drug users, law enforcers and experts who weigh in with commentary. First and foremost, Jarecki says, “the film is driven by human stories, by the everyday lives of people who are affected by this system.”

One of those stories involves Jarecki personally. In a recent interview with Indiewire, the director explains how a lifelong connection with the family of Nannie Jeter, his childhood caretaker, gave him a window on struggles that seem distant to many white Americans.

The House I Live In is “the first movie I’ve appeared in in any way,” Jarecki tells Seven Days. “I didn’t become involved in the war on drugs as an academic matter; I became involved because I saw what it was doing to people I cared about.” The film, he says, “allowed me to get out there and see them as particular stories in a universal picture, a haunting universal picture.”

After the 2008 financial collapse, makers of documentaries, even prizewinners, struggled to find big-screen distribution. Does Jarecki see that changing?

“The movie business is in a state of internal turmoil about who it is,” says the director. Because “large, usually quite vapid, spectacular films” dominate the market, he notes, “seriousness as part of what Hollywood thinks it’s selling has been on the ropes for some time.” Studios, Jarecki says, tend to look at films in terms of their potential to sell tie-in products. “I don’t think they’re going to feel that excited about making an action figure out of the war on drugs.”

But the recent wave of activism typified by the Occupy movement has whetted audiences’ appetite for fact-based fare, Jarecki suggests. “People are increasingly coming to understand that the American system is deeply, deeply broken,” he says. “That big wake-up invigorates interest in documentaries.”

Burlington filmmaker Sam Mayfield has been documenting that same “big wake-up.” When protests erupted in Wisconsin last March, Mayfield, 35, was there with her camera, getting footage for progressive media outlet the UpTake. She ended up traveling between Burlington and Madison for seven months, contributing reports to “Democracy Now!” and Burlington-based Toward Freedom. In June, she filmed her own arrest.

Now Mayfield is using Kickstarter to try and raise $40,000 to turn her footage into a feature documentary, Wisconsin Rising. At press time, she had nearly $31,000 and four days to go.

In 2010, Mayfield directed “Silenced Voices,” a 26-minute doc about migrant farmworkers that has screened widely in Vermont. She undertook the bigger Wisconsin project, she says in a phone interview, because “I was really aware that I had footage that other people did not have.”

Among the moments she caught on film were the senate passage of Gov. Scott Walker’s controversial “budget repair bill”; an activist chaining herself by her neck; protesters being borne away in handcuffs; and activists camping Madison streets in a tent village they called “Walkerville” (like the Depression Hoovervilles). “People took over blocks of the downtown capital area. They turned it into family vacations — they were really, really well organized,” says Mayfield, who sees those gatherings as a clear inspiration for the Occupy movement.

Mayfield also interviewed the activists, who ranged from janitors to geographers to political analysts. “I felt it was my responsibility to keep this story in the news,” she says. “After the huge Michael Moore rallies were over, the mainstream press went home.”

TV stations offered to buy some of Mayfield’s footage, she says, but “I really want to fund this myself and maintain editorial control.” In addition to fundraising on Kickstarter, she’ll apply for grants to fill out her estimated $200,000 budget.

“My hope is to stay focused on this project and not pick up other jobs to support myself,” Mayfield says. She’d like to release Wisconsin Rising when it can have the most impact — in the run-up to the presidential election.