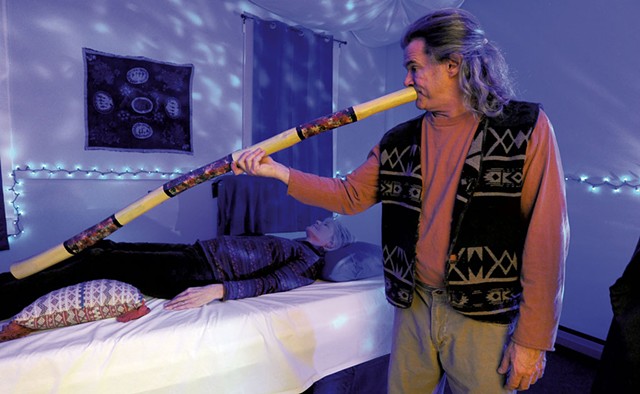 Once in a while, our humble lil state makes it to the big-time. Vermont music had a brief taste of the national limelight last week, and I'm not talking about Pitchfork's Sunday review of country singer-songwriter Iris DeMent's 1992 album Infamous Angel, a product of legendary North Ferrisburgh folk label Philo Records. But that was neat, too.

I'm referring to Vermont didgeridoo master Pitz Quattrone's, for lack of a better word, appearance on "The Tonight Show Starring Jimmy Fallon." OK, Quattrone didn't physically appear on the program. But his music and likeness did.

Fallon included — and roasted — Quattrone's 2013 track "Electric Tan!" as part of the show's ongoing "Do Not Play" segment on January 18. The recurring bit features crowdsourced music that's, well, perhaps worthy of being put on a playlist called "Do Not Play." Let's just leave it at that.

For those unfamiliar with Quattrone, he's Vermont's undisputed didgeridoo authority. In addition to playing and teaching lessons, he operated the Didgeridoo Vibroacoustics studio in Berlin from 2016 through 2017. In fact, I went to a few of his workshops during my first year of reporting for this publication.

Not only did I learn how to drone on one of his handcrafted instruments, I received a short vibroacoustic treatment, which involved lying on a "sound table" fitted with massive transducers that blasted prerecorded and live didgeridoo bass tones through my body. It was one of my most memorable and, to be honest, physically pleasurable stories.

Fallon's "audience" — presumably composed mostly of the crew and his house band, the Roots — cracked up when Quattrone's face first appeared on-screen.

"He looks like he's kind of surprised to see us," Fallon quipped to his chuckling band as he displayed an image of a bug-eyed Quattrone blasting a rattling tone from his didge.

"I've been trying to get my music on 'The Tonight Show' for years, because Questlove and the Roots are Philly guys," Quattrone, a former Philadelphian, told Seven Days by phone. He specifically referred to submitting his completely over-the-top "Cheesesteaks and Tastykakes," a novelty track and music video about two Philly delicacies. He dropped both in 2018 to coincide with the Philadelphia Eagles' ascent to Super Bowl LII, which the team went on to win. Was there a connection between the two events? Who can say?

After unsuccessful attempts to get some attention from the NBC variety show for "Cheesesteaks and Tastykakes," Quattrone discovered "Do Not Play" about a year ago.

"I'm thinking, Hmm, that could be me," Quattrone said.

It's simple enough to submit to "Do Not Play." You just have to send a quick email to DoNotPlay@tonightshow.com with your track. Quattrone sent in "Electric Tan!" along with a recent cover of Deep Purple's "Smoke on the Water."

Quattrone didn't receive notification that his song had been selected. Instead, he stumbled upon the segment while channel surfing away from "The Late Show With Stephen Colbert" during a commercial break.

"It was like a 'Twilight Zone' episode," he said, recalling the bizarre feeling of suddenly seeing his face on national television.

"Here's why I don't like it," Fallon said after playing a few seconds of "Electric Tan!" "I feel duped. I feel like a fool, because I came for the didgeridoo. He gives one taste of didgeridoo, and then it's like a rock song ... It sounds like the Muppets should be singing it."

I've got some news for you, Mr. Fallon. Your production staff duped you, not Quattrone! What's heard in the clip played on the show is actually a slickly edited version of the song. The original features about a minute and a half of didge before evolving into Fallon's aptly noted Dr. Teeth and the Electric Mayhem vibes. (Although, in my opinion, the song would be better coming from the more socially conscious subterranean denizens of "Fraggle Rock," given that it's essentially a public service announcement about the dangers of skin cancer and tanning beds.)

Quattrone wasn't fazed by the comparison. In fact, he's used to people being taken aback by his melding of sounds and cultures.

"Some people have a preconceived notion when they hear [the term] 'didgeridoo music,'" Quattrone said, defending his unconventional choice of mixing the ancient Aboriginal instrument with, as Questlove put it, "Rick Dees"-style rock. "Some people think [of] the meditation thing, or new age, and that's cool, but that's not what I do. I grew up on rock and roll and funk and soul." 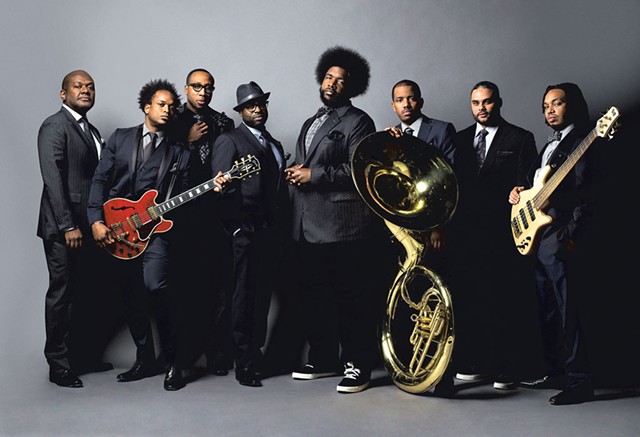 The Roots' reaction was especially hilarious, by the way. In particular, seen at the 2:58 mark of the YouTube upload, the gobsmacked expression on guitarist "Captain" Kirk Douglas' face as the song continues to defy expectation and sails off the rails is utterly priceless. It's a reaction GIF in the making.

Folks itching to get more of Quattrone's idiosyncratic work should check out his upcoming television program on Onion River Community Access Media. Described as a monthly musical variety show, "The Music Zone With Pitz Quattrone" will feature performances and interviews from local and nonlocal musicians. The premiere, with bluesman and frequent collaborator Dave Keller as Quattrone's guest, is likely to air in early February.

For Quattrone, his "Tonight Show" appearance was a huge honor, even if he was the butt of the joke. And, for what it's worth, I don't imagine just any singer-songwriter could make it to "Do Not Play." Terrible or otherwise, I'd say you'd have to be pretty damn special.

Said Quattrone, "If the Muppets covered my song, I would be a happy didgeridoo guy."

Young Galaxy, "Sleepwalk With Me"