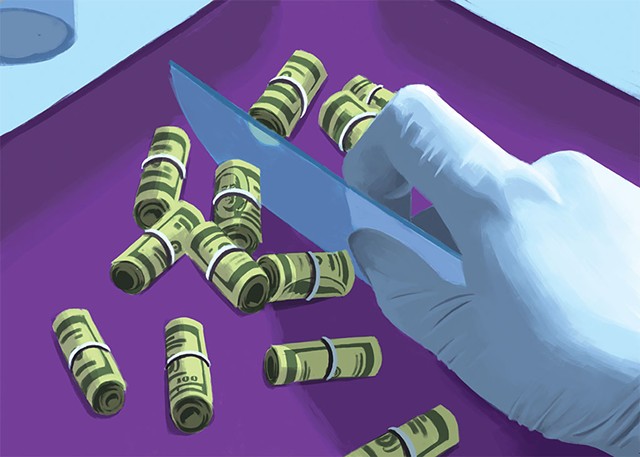 Vermont will receive more than $100 million from opioid manufacturers and distributors in the coming years, its share of legal settlements intended to help combat the national epidemic of drug-related deaths.

While the funding offers a significant opportunity to save lives, there's no consensus on how to spend it most effectively. Some view programs that aim to keep people off drugs as the best long-term investment. Others say the state has a moral obligation to help those already addicted.

The money has just started to arrive, and an advisory committee tasked with recommending how to spend it plans to submit an initial proposal in time for it to be included in the 2023-24 state budget.

The work comes as Vermont is assessing what may have been its deadliest year for drug overdoses. A record 217 people fatally overdosed on opioids in Vermont in 2021, and the total from 2022 could very well surpass that once all the data is collected.

"People's lives are on the line," said Rep. Dane Whitman (D-Bennington), a member of the advisory committee.

The funds come from settlements of lawsuits targeting major drug companies and wholesalers that are accused of fueling the opioid crisis with misleading marketing tactics. Without admitting wrongdoing, Big Pharma has agreed to pay more than $50 billion in settlements to date.

The Vermont Attorney General's Office expects the state to receive some $150 million (an estimate that includes $35 million from the Purdue Pharma bankruptcy deal, which is currently on appeal). Eighty-five percent of the total will go to the state; the rest, to municipalities.

Most of the funds will be paid out over a decade or more. Distribution of Vermont's largest single pot of cash — about $53 million from opioid distributors Cardinal Health, McKesson and AmerisourceBergen — will drag on for 18 years. All told, the state could receive an average of $6 million to $7 million a year over the next two decades.

That's a modest sum compared to the more than $50 million Vermont currently spends on substance-use disorder treatment and prevention each year. But the money can still make a significant impact if spent wisely, said Sen. Ruth Hardy (D-Addison), who represents the Senate on the advisory committee. "It's incredibly important to get this right," she said.

The money could, for instance, help the Department of Health meet the widely supported goal of expanding its Narcan distribution program, which currently receives about $2 million in state funding. The overdose-reversal drug comes in a nasal spray, and some U.S. cities are making it available in public places, and even in free vending machines.

Or the state could use the money to help expand a treatment option known as contingency management, in which drug users receive rewards such as prepaid debit cards when they meet certain treatment goals. The strategy has become the gold standard for outpatient stimulant-addiction treatment; a Vermont pilot program is under way in Chittenden County.

Attorneys involved in the opioid lawsuits drew lessons from the 1998 tobacco settlement debacle. Less than 3 percent of annual payouts from that $246 billion, 25-year deal have gone toward smoking prevention or cessation programs. States used most of the money instead to plug budget gaps, pave roads and even prop up tobacco farmers. The opioid settlements have protections in place to ensure that doesn't happen.

A record 217 people fatally overdosed on opioids in Vermont in 2021, and the total from 2022 could very well surpass that. tweet this

Still, it's up to states to decide exactly which programs to fund. Rhode Island wants to spend $2 million of its haul to establish a safe-injection site. Louisiana, on the other hand, plans to send a fifth of its money to local sheriff departments.

Vermont's settlement money will be kept in a special fund controlled by the legislature; the advisory committee will make annual spending recommendations, though lawmakers will have no obligation to follow them. The committee's initial proposal will focus on the $3 million Vermont has received so far.

Health Commissioner Mark Levine chairs the advisory panel, and its membership skews political: More than half of the 17 seats are held by people in state or local government, while only a third of the members work directly with drug users or could be considered experts in the field of substance abuse.

The group has held four meetings since August and has operated much like a legislative committee, inviting experts to provide testimony ahead of any debate.

Not everyone has been pleased with the process so far. Sen. Hardy said the testimony has all felt a bit "sanitized," largely because it has mostly come from health department representatives.

"I know they're doing a lot of great work," she said of the department, "but I'd also really like to hear from people in the field about what they're doing in the immediate instance of trying to help save somebody's life."

The committee will have to recommend whether to focus more on prevention efforts or on the approach known as harm reduction, which prioritizes keeping drug users alive so that they have a chance to eventually recover. Basic harm reduction strategies include distributing sterile needles, doses of Narcan and test strips that can check drugs for fentanyl. Some cities have also begun offering on-demand drug-testing services so that users know what they are ingesting.

Rocket, a Hartford Selectboard member on the advisory committee who has a single legal name, said the committee has a responsibility to fund programs that will have the biggest long-term impact. He noted that successful prevention programs yield significant savings when compared to the cost of treating someone's addiction after the fact.

"I don't know what the value of simply providing reactive remedies to people who are suffering is, because what we fail to do then is stymie the problem at the root," he said.

Other committee members strongly disagree. They say the state's primary focus must be on keeping current drug users alive, pointing out that many of them got hooked on drugs after first using the products of opioid companies.

"These settlement funds are the ill-gotten gains of companies that preyed on these very people," said Burlington Mayor Miro Weinberger, a member of the committee. Directing the money to "distant, future risks" while drugs are killing hundreds of Vermonters each year would be a "further travesty," he said.

Ed Baker, a licensed drug and alcohol counselor who's not on the committee but has been attending its meetings, agreed. "This money is coming in not because people got addicted to opioids, but because people died from opioids," said Baker, who himself is in long-term recovery from intravenous drug use. "Hundreds of thousands of people — they got our attention by dying. This money is for the efficacious and immediate remediation of that."

Weinberger thinks the funds should bolster Vermont's existing hub-and-spoke treatment model, which has lost some of its effectiveness in the age of fentanyl. The powerful synthetic opioid has complicated treatment efforts by making it harder for people to start taking the preferred addiction medication, buprenorphine. "Bupe" is not always effective for people who have used fentanyl for extended periods. The medication can usher people who recently used fentanyl into immediate withdrawal.

Meanwhile, cocaine and methamphetamine have been increasingly tainted with fentanyl, and because Vermont has few treatment options for stimulant users, people addicted to these drugs often continue to use unabated, leaving them at a heightened risk of overdose.

Another factor the committee will need to consider: geography. Programs that work well in Burlington or Brattleboro aren't always feasible in rural towns. "Obviously, Burlington needs to get help," said Hardy, who represents Addison County. "But we also have to make sure we cover the rest of the state, too."

Levine said he expects that the health department's initial proposal will feature spending on harm-reduction strategies in recognition of the growing death toll. But he said it would be "shortsighted" not to focus on prevention programs in the coming years.

"We want to preserve life, and harm reduction is a way to do that," he said. "But making strategic long-term investments in areas like youth prevention ... are going to be critical."

Hardy, meanwhile, said she's cautiously optimistic that the health department will come back with strategies that the committee can endorse.

"Will the proposal go as far as some of us would like to see? I don't think so," she said. "But I hope they realize they can't just come back and say, 'Let's just do some Instagram posts.'"

The original print version of this article was headlined "An Ounce of Prevention? | Vermont is debating how to leverage its opioid-settlement windfall to address spiraling drug problems"