“I like to argue,” says Aly Albertson, 15, of South Burlington, when asked why she signed up for the first ever Vermont Debate Academy. The weeklong summer camp took place June 25-29 at the University of Vermont, which boasts a debate team recently ranked seventh in the world. Professor Alfred “Tuna” Snider, who runs UVM’s Lawrence Debate Union, is also director of the World Debate Institute. UVM’s debate team has traveled all over the country and the world — including to Qatar, a global hub of world debate where the BBC hosts their series of famous “Doha Debates” each year.

At the Vermont Debate Academy, local high school students to work with a group of graduates from this prestigious program — including VDA founders, Sarah Anders ‘11 and John Sadek ‘12 — for free. Over the course of the week, the students perform debating exercises, listen to lectures from their college instructors, and engage in full-on debates with each other. This year’s 12 participants, who range in age from 14 to 17, are largely inexperienced debaters. And even the experience they do have is not necessarily relevant to what they’re learning at VDA; high school debating is not the same as college style Parliamentary debate.

Why teach them something they might not do again until college, if ever? “We want to give them public speaking skills, teach them how to construct a solid argument,” says Anders. “Many of us who were involved with UVM debate attribute some of our greatest successes to debating.”

Anders, for example, is now working as a communications associate at AmeriCares, a nonprofit humanitarian aid organization, and one of her co-instructors will be heading to NYU Law School in the fall. It was their passion for debate and the conviction that “they can use the lessons they learn from debate for the rest of their lives,” that led Anders and Sadek to start this summer camp, targeted at local high school students and prioritizing those who are low-income or who receive free and reduced lunch. They’ll be served free lunch here, too, as the camp has received generous donations from Boloco, Moe’s Southwest Grill, Leonardo’s Pizza, Big Daddy’s Pizza and City Market, which the duo says “really made [the program] possible.” 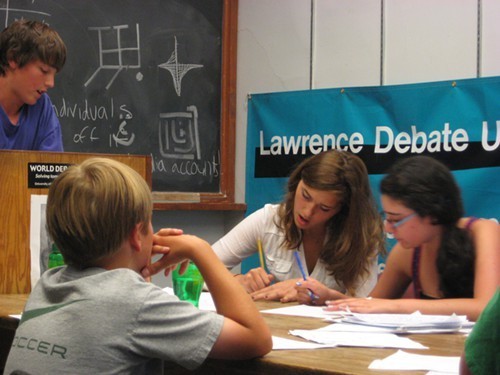 Topics of debate one afternoon ranged from the merits and pitfalls of eating at McDonald’s (“Ronald McDonald gives me nightmares!”), the implications of volunteering for the Hunger Games (“I’m small, and fast, so nobody would be able to get me.” “Yeah, but Katniss can shoot a squirrel through the eyeball.”), and whether sites like Facebook, tumblr, and Twitter were modes of self-expression and convenient communication or avenues for procrastination and cyber-bullying. The students took these topics and ran with them, pulling in evidence from personal experience (“I’ve used Facebook to ask about homework assignments”), remembered news stories and world events (“People in Egypt used social media as a way to communicate and start the revolution”), and celebrity idols (“Justin Bieber was discovered on YouTube”) to support their positions. Though some were nervous — “I’m so scared!” one of them admitted while up on the podium during a warm-up activity — the group was supportive, and the students improved even over the course of the day, developing logical, well-structured arguments and speaking with confidence.

And the students do seem to be having fun. Even after Tuesday’s formal debate ended and their coaches had filed out to tally scores, the Academy’s debaters-in-training continued to discuss the points made, albeit while shouting, giggling and giving each other piggy-back rides. LC Hines, 14, of Burlington, says he initially signed up for the camp because he heard there would be free pizza. But Hines, who presented an eloquent argument in favor of social media to conclude Tuesday’s afternoon debate, admits that he’s “enjoying [the camp] a lot more than I thought I would.”