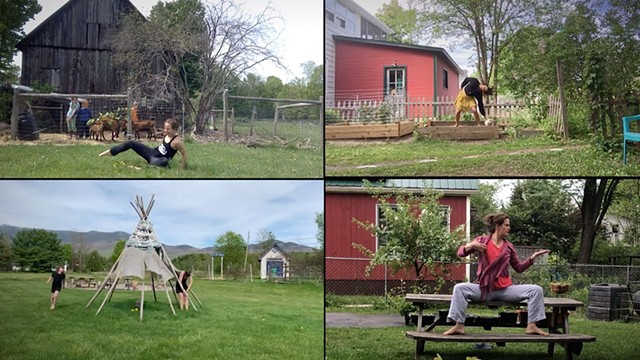 Everyone needs to experience joy, perhaps especially as the country navigates a pandemic, political divisiveness and the tumultuous struggle for racial justice. Through dance and philanthropy, the Vermont Dance Alliance and the Black Freedom Fund are working to help people nurture their joy and support racial equality in the Green Mountain State and beyond.

In late June the alliance, a statewide nonprofit that supports dance artists, released the video "TRACES 2020 Virtual Performance." It's the pandemic-era version of the group's annual one-day event. Since 2017, TRACES performers have danced outside in Burlington — on sidewalks, alongside public sculptures, on the waterfront — where audiences encountered them by design or by chance.

This year, the 11.5-minute video, produced by South Burlington's Extensity Creative, features 31 dancers of all ages performing 30- to 60-second pieces in backyards and woods, on picnic benches and industrial stairs. The pieces are elegantly interwoven and set to music by local musicians. It's the most intriguing and satisfying dance video this viewer has seen in a long time. Clever, energetic and filled with surprises, the video exudes joy and captures normally ephemeral live dance as a forever-accessible gem.

"People need this outlet of movement and connection to community," said Burlington's Hanna Satterlee, founder and executive director of the Vermont Dance Alliance. The group hasn't sponsored in-person events since the pandemic began and won't for a long time, she said. Hungry for interaction, participants enjoyed Zoom rehearsals and collaborating on the video; the alliance is sponsoring more dance video projects as a result. For example, on Monday it launched Dancing Digitally, a five-week interactive series on five local choreographers' new works.

"TRACES 2020" also came at a time when alliance board members "wanted to give back immediately to an organization working for racial and social justice," Satterlee said. After considering numerous national groups, they discovered the Vermont-based Black Freedom Fund, which perfectly fits the alliance's mission of empowerment. Just before the credits at the end of the video, viewers are invited to donate.

Christal Brown is an artist, educator, entrepreneur and chair of the dance program at Middlebury College. In early June, she launched the Black Freedom Fund to support Black artists, families and entrepreneurs who are under-resourced due to COVID-19 or other challenges. Through it, she said, she aims not only to provide monetary gifts but also to help create the conditions that support joy.

"Most of the things that we relish in this country that are African American made are from the outgrowth of joy, not pain," Brown said. "The publicity of the pain overshadows the joy of the music, the dancing, the love. It overshadows a lot of the work we've done to be able to be joyful people."

Brown appreciates using "TRACES 2020" as a vehicle to raise funds because the video exemplifies the complexity of bridging different life experiences. Just as performers must understand each person's part, so must we "recognize what goes into each person's reality" to change systems of racism and oppression, Brown said. The collaboration of the alliance and the Black Freedom Fund is "a way of leveraging our realities."

In the Middlebury area, where Brown and her young son are among the few Black residents, her neighbors and allies recently began asking for advice on how to support racial justice.

One day she responded, "'I can do this. I can make something for you. Hold on. Give me a minute,'" she recalled. Almost that quickly, Brown created the Black Freedom Fund under the auspices of her nonprofit company INSPIRIT.

"There's a pain point that's happening right now, and there's a lot of confusion," she said. "When change happens, it has to happen person to person ... in a meaningful way. I wanted to stand in the gap between different communities" by making it easier to give.

In less than a month, the Black Freedom Fund's crowdsourcing campaign surpassed its $10,000 goal — and the gifts keep coming. As of Tuesday, 184 people had made donations of $20 to $1,000, totaling $14,457; some businesses had also donated, bringing the total even higher.

Brown put $10,000 in an investment fund and is using the overage to make a gift of about $500 each month. Through professional and personal networks, she identifies recipients around the country for whom that amount would be significant. To date, there's enough to last about 14 months; after that she'll begin drawing from the investment's accruing interest.

A recent gift went to a man with whom Brown grew up in Kinston, S.C. Initially, he got caught up in crime, but after seeing many of his friends die or be drawn into "the prison pipeline of a small town where there's no opportunity," Brown said, "he totally flipped his life around." He's now married, has a son and is a generous force in his community, serving meals to the homeless, doing fund drives and cooking for neighbors, according to Brown. The man recently underwent a leg amputation and cannot work while waiting for the prosthetic. The Black Freedom Fund covered his July rent.

"Black joy is a reservoir," Brown said, that allows people to persevere despite loss, pain and misfortune. Sometimes a gift can help refill it.