Vermont Dairy Farms Are Milking Robot Tech for All It's Worth 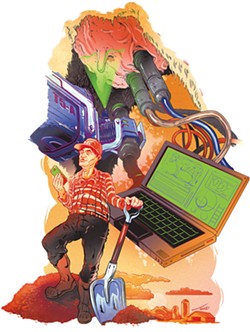 In the undulating hills above Cabot Creamery, its pearly towers like a milk-soaked Emerald City, Churchill Road narrows to a single lane. Thickset maples line the track on both sides, shading crumbled stone walls that edge viridian pastures. Beyond the hayfields, the Northeast Kingdom rolls away in painterly autumn hues.

The hill crests just before the old Churchill dairy, where the same family has milked cows for generations. Over the swell, visitors will see the weathered farmhouse; the old barn, its paint faded and chipping; and cows grazing toward a rising tree line. But first, they'll notice Morgan Churchill's new barn, its 24,000 square feet sheathed in gleaming red metal.

The scream of saw blades reveals that the project is still in progress. So does the heavy equipment stationed in a driveway of loose, just-laid gravel. Inside the milk room, 28-year-old Sam Cummings bends over joinery, running through the final checks on the new AMS Galaxy Astrea robotic milking system he's been installing for the past several weeks.

Churchill looks on. He purchased the farm from his uncle three years ago after leasing it for eight. The old barn needed work, and rather than make costly upgrades, Churchill chose to decommission it as a milking facility and build a new one.

Like most dairy farmers, Churchill had spent much of his 36 years stooping under cows, milking equipment in hand. Facing a lifetime scheduled around twice-daily milking sessions spent showered in bovine splatter, the young farmer resolved to take a giant leap. He called up Cummings and ordered two robots to do the dirty work for him.

The Cummings family has been selling dairy equipment since Sam's father founded New England Farm Systems in Williamstown in 1995. Though robotic milkers are increasingly common — at last count, 22 of Vermont's 860 dairies were using them, up from 11 in 2013 — Churchill's system is the company's first foray into space-age milking.

"We had a lot of farms calling and asking if we sold robots," Cummings says. "It seems to be the big thing for smaller dairies these days."

He walks to the center of the new barn, where a small room houses two stall-size units that mimic traditional milking stalls in function, if not form. At the head of each stall is a plastic grain bucket; low and toward the rear, a milking device with four suction cups — called beakers — connects to tubing that channels the milk to the bulk tank. When a cow enters the milker, an antenna identifies her by a tag on her ankle.

Between the two stalls is a gated pit where a farmer can stand and observe the machinery in action. Above the pit, a central "arm" with a cup on the end swivels from one stall to the other. As each cow enters, it sanitizes her four teats and identifies their pattern. When the arm retreats, the milking plungers home in on the teats and begin massaging milk from the udder.

Sensors measure volume and milk fat and check for contaminants such as blood or pus, then channel tainted milk into a container separate from the bulk tank. The system can be programmed to alert the farmer to a cow's status via text or email. Over time, the data provide a living history of each cow — her milking habits, flow rates, milk quality and overall health.

The robots provide far more detailed information than a farmer could ascertain during manual feeding and milking. "People tend to think: Oh, robots: That's factory farming, where every cow gets treated the same," says Clark Hinsdale, who had Vermont's first milking robots installed at his Nordic Farms in Charlotte long before doing so was common practice. "The reality is opposite: Every cow gets treated individually. You can spend your time focusing on the problems, and find the problems quicker."

When Paul Godin — then principal at Godin Mechanical in Enosburg Falls — installed Hinsdale's Lely robotic system in 2003, Nordic Farms was one of six dairies in a nationwide pilot program. The federal government hadn't yet approved the machines for use on American soil; administrators at the Vermont Agency of Agriculture, Food & Markets would soon play a key role in securing that approval.

Though the devices were becoming popular in Europe — Holland-based Lely Group introduced its first models in the late 1980s — American dairy professionals were slow to welcome the robots. "People thought I was crazy [for trying to sell robots]," Godin recalls. "It was terrible at first."

Lacking endorsement from the U.S. Department of Agriculture, the Food and Drug Administration, or veterinary associations, farmers weren't keen to spend hundreds of thousands of dollars on new, untested equipment, and lenders weren't interested in financing them.

"There was some awkwardness in being the first," Hinsdale says, noting that his original Lely system had its flaws. For the first seven years, he continued to milk several dozen cows by hand because their udders didn't align with the robots' standard configuration.

When Lely upgraded its machines, its reps could no longer service older models, but Hinsdale wasn't ready to give up on robots. He worked out a trade-in deal so he could upgrade to modern models that could be serviced and repaired.

Godin would not sell another Lely system until 2009, when Fairfax farmers Pete and Madonne Rainville called for a consultation after losing their barn and milking parlor in a fire. Looking to rebuild more efficiently, the Rainvilles installed one Lely Astronaut milking robot.

By that time, the robots had been cleared for use on American farms, and emerging models were much improved. As farmers adopted the systems in greater numbers, business took off. "Things really started to rocket," Godin says, "and we've been right out and steady ever since."

Godin renamed his business Lely Center Vermont and added a second location in Albany, N.Y. Since 2010, he has installed nearly 100 robotic systems in five states.

The robots are in high demand for many reasons. A single machine can milk 60 cows three times in a 24-hour period, rather than the traditional two. Traditionally, animals are tied into the stall to await the farmer's visit, but the robots work in tandem with a setup that allows cows to wander into the milking stall at will. Each visit rewards a cow with grain and the comfort of an empty udder, triggering her body to refill it.

More frequent milkings mean more milk per cow. Godin says his clients average a 20 percent increase in overall milk production once their cows are trained to the system. The system is also programmed to avoid overmilking: If a cow returns to the milker too quickly, the machine declines to initiate.

Then there's the labor consideration. Every source contacted for this story notes the dearth of skilled, willing dairy hands.

"It's hard to find someone who wants to milk cows these days," says Churchill, standing on a ladder in his new barn. He estimates that milking and related chores used to gobble up nearly five hours of his working day. "That's time that I could be haying," he says.

In Charlotte, Hinsdale says he can staff his farm with fewer workers at higher rates. "There's less emphasis on tasks that require brute strength," he says, "and more emphasis on things that require thinking. I hear the minimum-wage debate, and I don't even know what the minimum wage is right now because no one here works for it."

The shift away from manual labor also protects a farm against hardship caused by injuries. Theoretically, Hinsdale says, "a farmer could experience a disaster, like being in a wheelchair or a damaged limb, and not have it knock them out of being able to run a dairy farm. That's important."

While the robotic milkers afford farms measurable benefits, many farmers cite quality-of-life factors as the real reasons for buying them. Churchill's two children are 7 and 4 years old. "For us, it was about wanting to spend more time with the kids," he says as his son cruises through the barn on a bicycle.

Churchill is not alone, says Diane Bothfeld, deputy secretary at the Vermont ag agency, who grew up at a Cabot dairy just down the road from Churchill's farm. "It used to be, you milk for 25 years without a break and without a vacation," she says. "People don't want to do that anymore."

Bothfeld's brother took over the farm when their parents aged out. Now, after milking cows for decades, he's nearing retirement and hopes his own son will continue working the land. Diane says the family is considering installing robotic milkers.

At University of Vermont Extension, Tony Kitsos has helped dozens of farmers evaluate and fund new technologies. Robotic milkers aren't for every dairy farm, he notes. For every 10 farms considering them, Kitsos estimates, just two or three take the plunge.

And, Kitsos notes, the new technology won't save an ailing farm. "The farms that do best [with robots] are farms with top-notch managers," he says. "Installing robots isn't going to cure feed deficiencies or reproductive issues. Those problems need to be cured first so [the farm] can maximize the money [it's] spending."

Robots can, however, help keep a farm viable for another generation. Emerging technology appeals to young people, Kitsos acknowledges. But, he cautions, "If we're going to create an environment for young farmers to get into the business, we have to make this a viable option ... The makers of the product will have to do what they can to make the product more affordable."

Secretary Bothfeld echoes that concern: "With some of these multigenerational farms looking to pass the [torch], it's a question of, is there enough money or equity [to finance] the transition, and to invest in the robotic milkers?" Often, the secretary says, the question of whether to undertake such investments to carry on the family farm hinges not on interest or desire, but on money. Most young farmers haven't amassed the wealth — or credit — to invest in the new technology.

Still, Bothfeld predicts that robot-induced freedom could be a game changer for young people who want to keep farming in the family without reliving their parents' struggles. "I think this will improve the social relationship aspect for the younger farmers," she says. "The younger generation wants to live differently."

The original print version of this article was headlined "Got Robots?"