Vermont Culinary Professionals Are Slimming Down 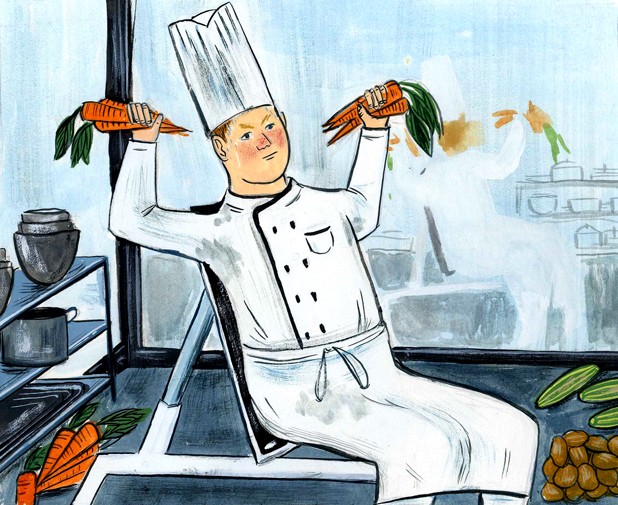 When I became a full-time food writer in 2008, I stopped weighing myself. My heft (or lack thereof) was never of any concern to me. I’d eaten whatever I wanted my whole life, and with my height of just more than five feet, the number on the scale had only ever grazed triple digits. So why worry?

Within a year, I was aware my old clothes no longer fit, but that was no surprise to someone who ate out for half her meals. It wasn’t until I began having gallbladder problems that it occurred to me that my eating was less than healthy.

Losing the organ last spring was my wake-up call. Hearing how much I weighed stopped me in my tracks. In five years, I had gained more than 40 pounds, nearly 50 percent of my former self.

Culinary pros will always put their bodies on the line to cook, grow and taste food and make it better for their customers, their consumers and their readers. But there are limits. Here’s my story — and those of three other prominent local foodies who recently made big changes in their eating and exercise habits.

I happened to kick off my career at an especially inopportune time for my waistline. While vegan and gluten-free eating may be gaining traction in some circles, most serious food lovers have been rolling in lard, tallow and shmaltz. In our “everything’s better with bacon, even bacon” culture, cutting portions may not be enough. For me, even reducing intake was a challenge, because brain damage from seven years of neuro-Lyme disease has left me unable to sense my own satiety. If I like something enough, I could keep eating until I approach vomiting.

Once I recovered sufficiently from surgery, I slowly worked my way up to hitting the gym five or six times a week for cardio and weights. When I couldn’t make it, I tried to do some cardio boxing on my Wii Fit.

By the time I arrived at Ideal Weight Solutions in South Burlington, I had already shed 10 pounds. Though my general practitioner, a former colleague of Robert Atkins, thought IWS’ prescribed diet would be too strict for me, I started buying food from the storefront. On days when I didn’t have time to make lunch, I used a protein-powder shaker to mix up protein-enhanced chicken à la king or creamy mushroom soup, as if I were an astronaut.

When I did cook ahead, lunch might be a few slices of local, grass-fed brisket or a spice-rubbed, roasted chicken thigh with leftover delicata squash and kale salad. Without even realizing it, I had gone paleo.

Grains are now part of my life only when I have to eat them for work. Unlike strict proponents of caveman eating, however, I haven’t cut out dairy. My favorite dessert is low-fat Greek yogurt with a bit of honey and dark berries mixed in. And I cheat whenever I eat for work, which makes it much easier to stick to my very first diet the rest of the time. The difference is that, when I’m reviewing a restaurant, I don’t eat the whole pork shank anymore. Now it’s more likely to last me a couple more meals, mixed with greens and oven-crisped eggplant.

I’ve lost 30 pounds and am back to a size 2, but I’m not ready stop yet. I doubt I’ll ever weigh less than 100 pounds again, but I feel the healthiest I have in my adult life. That’s even better than winning a burger-eating contest.

And I’m not alone in feeling that way.

As chapter president of Slow Food Vermont, Mara Welton does more than her fair share of dining out with friends. At the end of 2011, during one of those meals, she had a thought that would drastically change the path of her diet. “I was sort of reflecting and looking around the table at all my friends,” Welton recalls, “and I was thinking, Oh, my goodness, we are all getting a little chubby. Is this lifestyle sustainable?”

Welton answered that question in the negative after she noticed herself losing her breath “doing dumb things,” such as climbing stairs and even tying her shoes. She took a few months to steel herself for a major lifestyle change, and in March 2012 she and her husband, Spencer, began the Jillian Michaels Body Revolution Plan.

Welton describes the 90-day regimen as “a severe weight-loss plan.” She did daily workout videos and ate a diet consisting of three meals plus two snacks — more food than Welton was used to eating, but focused on lean protein and veggies with a few grains. Her daily intake was stripped down to 1000 to 1500 calories, depending on the intensity of the accompanying workout.

At the end of the 90 days, Welton had dropped 31 pounds. Once she was done with Jillian, she kept those pounds off by staying active as a farmer and eating small portions. Reintroducing bread into her diet caused Welton to gain back some weight, she says, so she cut back on that and dairy, her “gutbusters.”

Nearly two years after embarking on her journey, Welton has embraced a healthy lifestyle that includes regular weight training and a paleo diet. And eating out? The farmer allows herself three or four meals a week, or 10 percent of her weekly intake, to enjoy favorite restaurants such as Pistou — bread and pasta included.

Vermonters know Steve Atkins as a chef par excellence, a repeated nominee for the James Beard Foundation Award for the best chef in the Northeast. But only his close friends know the Champlain Valley Union High School grad as a sportsman.

“I’ve always been fairly active in sports and going to the gym,” says Atkins. But by 2012, the pulls of fatherhood and owning a restaurant had made it harder for him to fit in workouts. According to the chef, “It was a combination of getting older and realizing that I was a little softer than I once had been” that stirred him to make a change.

It was after a late night in the kitchen that Atkins found his path to getting healthy. An infomercial in the wee hours inspired him to try the P90X, or Power 90 Extreme system, a notoriously grueling cross-training video workout. Like Welton, Atkins did 90 days of strict diet and exercise, which left him 25 pounds lighter.

He’s maintained that loss. “It’s as if it resets your body,” Atkins explains of P90X. “I’m basically eating what I did before.” That means tasting his own plates of fritto misto, all-day-roasted pork and homemade gnocchi to ensure they meet his standards. “I have to eat everything,” says Atkins. “I like eating everything.”

Of course, that’s not without some continued effort outside the restaurant. Atkins has moved on from P90X to the same company’s even more strenuous Insanity series. His meals at home are more likely to be chicken tacos with pickled veggies than the type of fare he prepares at work. And when Atkins finally picks up that Beard award he won in 2013, he’ll be wearing the same size he did in high school.

Burlington culinary consultant Robin Schempp doesn’t weigh herself, she says, so she doesn’t know how much weight she lost last year. But Welton offers a testimonial for her colleague. The last time she saw Schempp at an event, she notes, “I didn’t even recognize her.”

The former co-owner of the greatly missed Mist Grill in Waterbury says that years in the restaurant business left her in the unhealthy habit of eating big meals late at night. Her current job involves helping food businesses craft their market strategies. It often takes her out of her home kitchen and even to unfamiliar cities, where she eats all her meals at restaurants.

Last year, Schempp says, she became more mindful of what she put into her body and how she burned it off. Just as she doesn’t measure her success quantitatively, Schempp says there was no magic bullet when it came to achieving a svelte physique. “I still eat and drink all my favorite things. I still have generous restaurant meals, so in terms of consuming, for me it isn’t so much what but how,” she explains.

When she focuses on writing, as she increasingly does in her career, Schempp says, it’s particularly important for her to have a clear head. That means refreshing after lunch with an adrenaline rush. She takes part in outdoor activities year-round: kayaking or getting out for a hike in the summer, skiing or snowshoeing in winter.

Yoga has also been an important part of Schempp’s transformation. Returning to daily sessions has had visible results, the businesswoman says, and it’s helped calm her mind, reducing fat-causing stress.

Calling herself “a perpetual work in progress,” Schempp says she avoids the gym like the plague. But her new shape seems to be sticking, thanks to a simple balance of calories in and calories out. During a visit to Italy’s Piedmont with cheese makers last September, Schempp says, mountains of formaggio and vino didn’t stop her from biking her ass off.

The original print version of this article was headlined "Fit Foodies"