Bob Lesnikoski can't say just why he started growing cranberries 25 years ago. It wasn't exactly easy. Cranberries grow in sandy bogs, which Lesnikoski had to dig into the hillside on his Fletcher farm. He invested in a picker to pick berries and a walk-in freezer to store them. He bought cardboard berry boxes by the tens of thousands. He built a juicer so he could sell cranberry juice and bought glass bottles to hold the juice, as well as purchased a device to adhere labels to those specific bottles.

It's no wonder that Lesnikoski, 60, owner of Vermont Cranberry, is the state's first and only commercial cranberry farmer. That's the main reason he cites for getting into the business: Nobody else was doing it. And Lesnikoski, who had worked in commercial logging and had a long history of heavy equipment operation, knew he could.

"This business wouldn't work anywhere outside of Vermont." Bob Lesnikoski tweet this

These days, Lesnikoski farms cranberries full time. He produces 24,000 to 30,000 pounds of berries per year and sells them whole and juiced in independent grocery stores and co-ops around the state.

Clad in a wool sweater and a fleece jacket with "Cranberry Bob" embroidered on the front, Lesnikoski gave Seven Days a tour of his operation on a recent November day. The cranberries had all been picked in a two-week mad dash, but, unlike in a normal year, many of them were stuck in the freezer. Supply-chain problems have kept Lesnikoski from juicing this year; his glass bottles are on back order.

He recruits friends and neighbors to help pack during the busy season, but otherwise, Vermont Cranberry is a one-man business. 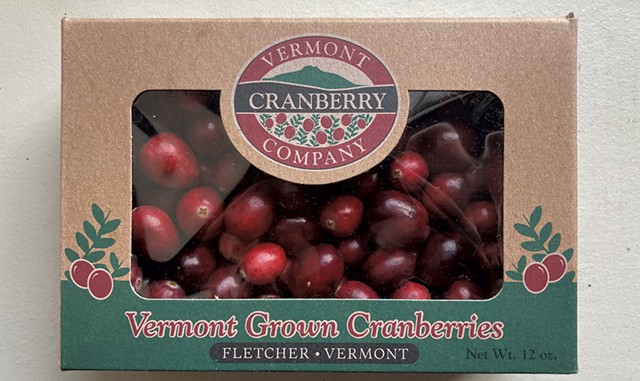 Fall is always crunch time in the cranberry biz, because cranberries have a significant market only in the lead-up to the holidays. "Cranberries have a six-week season," Lesnikoski said. "After Thanksgiving — it's not quite as bad as a pumpkin the day after Halloween, but yeah."

The market is also "weather driven," he said. "It's been so warm this year, no one's been thinking about cranberries."

Native to North America, cranberries were used for food and dye by the region's Indigenous people. Recipes written in English indicate that cranberry sauce, with water and sugar added to the berries, was eaten as an accompaniment to turkey as early as the 18th century, according to the Washington Post.

Today, cranberry sauce stands as a tart contrast to the fat-laden decadence of a Thanksgiving meal, perhaps one of the more sophisticated notes in traditional American cuisine. Some cooks make their own cranberry sauce, with or without additions such as nuts and citrus, while others are loyal to the jelly-like consistency of canned sauce.

"I always try to think of what makes cranberries tick," Lesnikoski said. "The average consumption, I think, of cranberries in the United States is two ounces per capita. It's kind of the first part of the holiday meal that you let your kids make on their own."

Cranberries, a cousin of the wild blueberry, grow close to the ground on short, woody vines. Readers may get their primary image of cranberry farming from the Ocean Spray commercials, in which a farmer stands waist-deep in floating berries. Those ad spots depict the wet harvest, a process that involves flooding the cranberry bog and skimming the floating berries off the top.

Though Lesnikoski wet-harvested for the first few years of his operation, he doesn't harvest his berries that way anymore.

"I disappoint people all the time, because we're a dry harvest," he said. He uses a small walk-behind picker that scoops berries off the vines. Berries that are picked dry can be sold or frozen whole, while wet-harvested cranberries are typically only used for juicing. 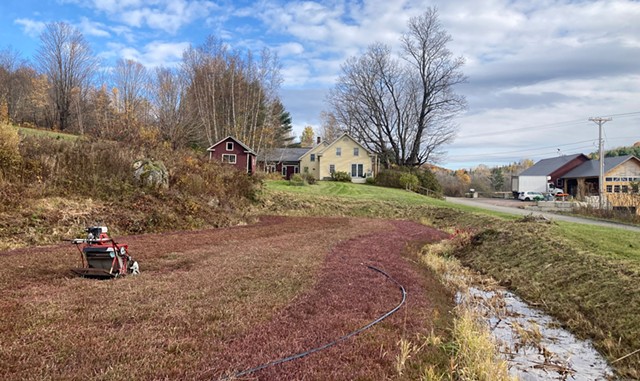 Lesnikoski said he's confident this batch of berries will hold in customers' fridges into December, and he's heard anecdotes of cranberries lasting even longer. "I've had people come up to me at the farmers market in the summer and say, 'I just found your box of cranberries in the back of the fridge. And it's August, and they're fine,'" he said.

Lesnikoski works with wholesale distributors to get his berries into stores and restaurants around the region. One of his first customers was Boyden Valley Winery & Spirits in Cambridge, where Lesnikoski also worked for 15 years. Before that company stopped making fruit wine, it made a cranberry wine with his berries.

Lesnikoski, who's on the steering board of the Burlington Farmers Market, is acutely conscious of how Vermont's agricultural infrastructure is interconnected. The whole system revolves around the large dairy operations, he said, which make it possible for other Vermont producers to get the equipment and support they need.

"If we lose a lot more dairy, I'm not going to be able to go to a farm-supply store and buy what I need, because there's not the volume of business," he said.

For now, Vermont Cranberry is trucking along. Last year, Lesnikoski intentionally sold all his berries early in the fall, anticipating a pandemic slump; this year, he's more confident holding berries for buyers who come later in the season.

As for using cranberries in his own kitchen, Lesnikoski said he likes to include them in pan sauces and roast them alongside meat and vegetables. Cranberry-orange muffins? Not his thing.

"I'm not much of a baker," he said. "Cranberries have a reputation as a pastry item, when they're actually quite a good savory item, also."