Vermont Cops Target 'Facilitators' Who Let Dealers Use Their Homes 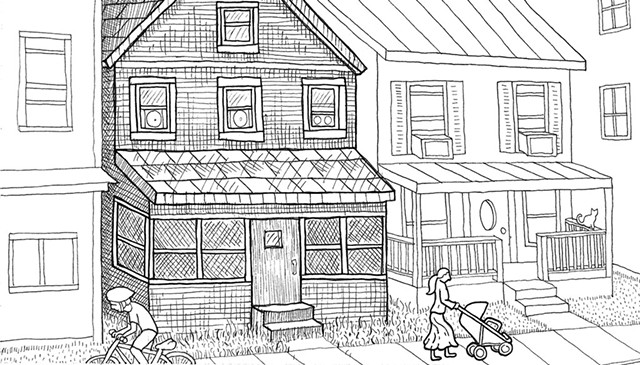 Just three blocks from the hip bars and restaurants in Winooski's resurgent downtown, a neighborhood displays signs of poverty and neglect. Many homes northeast of the traffic circle have peeling paint, slumping stairwells, and small overgrown lawns littered with plastic toys and other discarded junk.

Police shone a bright light on the area two weeks ago at a press conference attended by federal and state law enforcement officials. Hours earlier, they announced charges against eight people living in a three-block stretch of Malletts Bay Avenue that also hosts Winooski's library, a YMCA and a community center that provides services to teenagers.

The accused weren't drug dealers, but a group of people that authorities have labeled "facilitators" — Vermonters who open their homes to out-of-state drug sellers and provide them with housing, transportation and a place to sell to local addicts, often in exchange for drugs or money.

Police said the eight people arrested represent a dangerous, easily overlooked element in the fight against opiate abuse. In court documents, federal prosecutors said the alleged Malletts Bay Avenue facilitators "exacerbated the scourge of heroin and crack cocaine in Chittenden County" and turned their apartments into a "warehouse" or "retail storefront" for drugs.

"The great majority of the drug dealing that we see in Vermont doesn't take place through anonymous interactions in darkened corners. It runs through the houses, apartments, and condos of the Vermonters who facilitate," U.S. Attorney Eric Miller told Seven Days. "The successful illegal drug trade requires ... addicts and ... facilitators who put out-of-state dealers in touch with what they need to be successful."

The cops touted the Onion City investigation, which involved nearly half of the homes in the neighborhood, as a major blow to local drug distribution. Each of the Winooski Eight faces a 20-year maximum sentence for a charge of making their home available for drug distribution.

That's too much, according to Vermont Defender General Matt Valerio, who suggests that this particular drug-busting strategy is more about public relations than improving public safety. Valerio says that many facilitators are addicts themselves who need treatment — not jail time.

In recent years, policy makers and cops across Vermont have drawn a line: Drug dealers are to be targeted and punished with long sentences, while drug addicts should be diverted from the criminal justice system and sent to treatment.

Facilitators fall into a gray area that, not surprisingly, is a subject of some debate.

Police tend to view facilitators as high-value targets that, in some cases, may be harder to replace in the supply chain than the dealers who work with them, according to Miller.

He explained, "If you're going to utilize the facilitator from out of state, you need to build a relationship of trust and dependence."

"The great majority of the drug dealing that we see in Vermont doesn't take place through anonymous interactions in darkened corners." U.S. Attorney Eric Miller tweet this

Police fighting drug-related crime in Rutland recognized that particular problem some time ago. In 2015, Troy Gibbs got popped for allowing out-of-state dealers to work out of his Summer Street apartment — he went to federal prison for 18 months for it. Michael Petruccelli got four years for letting a Cottage Street home that he managed and lived in become a hub of heroin and cocaine dealing.

Winooski Police Chief Rick Hebert supports a similar strategy in Chittenden County's smallest city, which is the first U.S. home for many refugee families from Somalia, Vietnam, Bhutan and other countries.

"The biggest concern is that this is happening in close proximity to children and a public space," he said of the troubled Malletts Bay Avenue neighborhood, which is just around the corner from the Winooski police station.

"In the past, there were few or no consequences for residents allowing drugs to be sold from their homes," Hebert said. "We are hoping that through this collaboration on both the state and federal [level], people will understand that if you allow someone to sell drugs from your home that you will also be held accountable for their actions."

Villanueva had been convicted of two counts of drug distribution, assault and attempted robbery in New York when police arrested him in Vermont last September. On June 6, he pleaded guilty to conspiracy to distribute heroin and cocaine. His plea agreement is under seal, and he's expected to be sentenced in October.

Villaneuva's St. Albans facilitator, Sarah Ellwood, was arrested at the same time he was. According to a court affidavit, Ellwood told investigators that she used heroin daily and stole from Villanueva's personal stash to feed her habit.

While Ellwood awaited trial earlier this year, authorities twice released her from jail to live in residential substance abuse facilities. But both times, she violated her conditions of release — she tested positive for opiate use on one occasion and was kicked out of a treatment center for violating house rules — and returned to prison. Ellwood pleaded guilty on July 19 and is awaiting a November sentencing hearing.

Valerio said he would support the strategy of targeting drug facilitators — but only if authorities focus on treating those who are drug addicts.

"It depends on how the cases are disposed of," Valerio said. "If they use the power of the federal criminal system to identify the kingpins and deal with them one way and they allow others to have sentences that result in expungement or probation, then it may be a useful thing, as long as the tenets of treating addicts as a public health problem as opposed to a criminal problem are held."

Many of the people arrested in the Winooski raid are themselves drug users with histories of petty crime; Miller acknowledged that none was known to be violent and, while declining to discuss specifics, said he would consider sentences that result in treatment for some of the accused facilitators.

In 2015, Hackney and Rivard both faced eviction proceedings after failing to pay their share of rent — less than $200 — in the apartments, which were mostly paid for by the Burlington Housing Authority.

Rivard had struggled with drug and mental health issues. Last week he appeared in U.S. District Court, in a federal-green jumpsuit, for a hearing. Assistant U.S. Attorney Kunal Pasricha said his urine tests had shown him to be drug-free in recent months.

The prosecutor agreed to release Rivard from jail pending his trial, he said, "based largely on the steps he has taken to get help." Rivard turned to his family members in the gallery, cracked a large smile and gently pumped his fist.

The very next day, a little brown-skinned girl sang as she strolled past some of the apartments on Malletts Bay Avenue. A boy carried a snack pack into the community center, where he met up with a few buddies.

Sitting on the sidewalk outside one of the targeted apartments, a Winooski resident who would identify himself only as Tyler said that the neighborhood was well-known as an easy place to score drugs. Tyler said he doubted the arrests would have much impact.

"They let it go on, do a big sweep, then everybody is scared for a few months," Tyler said. "And when that's gone, someone else comes in."