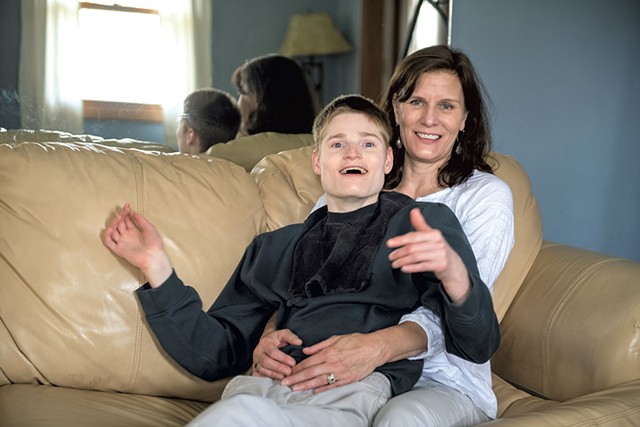 Unable to talk, feed himself or use the bathroom on his own, Christopher is completely dependent on his mother and requires around-the-clock care. O'Brien has some help: The state pays for the caregivers she hires to come into their South Burlington home 13 hours a day. But such workers are hard to find and routinely quit with little notice. O'Brien inevitably steps in to fill the void.

The caregiving duty "consumes my life," she said.

O'Brien usually can't be paid for taking care of Christopher, even when the money in his government-funded care budget goes unspent, because state regulations forbid compensation to family caregivers of people with developmental disabilities. The pandemic changed that. To keep families safe during the public health crisis, the state loosened the rule on an emergency basis. Hundreds of families converted unspent care budgets into payments over the last two years, up to $5,000 per quarter.

Paying family members has emerged as a potential solution to the chronic shortage of professional caregivers in Vermont. tweet this

For O'Brien, the arrangement validated her caregiving as legitimate work and brought in an extra $15,000. For other families, the payments were an economic lifeline, helping offset lost wages when a breadwinner stayed home with their loved one.

Initially viewed as a stopgap measure, paying family members has emerged as a potential solution to the chronic shortage of professional caregivers in Vermont. But while many parents, including O'Brien, support the idea, advocates say the state should spend its money elsewhere: raising wages to attract more professional workers, for instance, or creating more group homes where people with developmental disabilities could live apart from their families.

Skeptics say codifying family payments would enable the state to continue shortchanging an already underfunded corner of its health care system at the expense of its most vulnerable, many of whom don't want to live at home forever.

"It's really solving the problem in the short term and setting up a system where we further exploit parents," said Kirsten Murphy, executive director of the Vermont Developmental Disabilities Council.

The Department of Disabilities, Aging and Independent Living is weighing these arguments as it works to renew a multiyear plan that spells out how disability services are delivered in Vermont. Jennifer Garabedian, director of the department's Developmental Disabilities Services Division, said she and her colleagues have much to consider before they decide whether to seek federal approval to pay parents permanently.

"But, certainly, we have seen how it could work," she said.

Nearly half of DAIL's $537 million budget this fiscal year will go toward developmental disability services. Vermont's Medicaid program, which receives 55 percent of its funding from the federal government, will pick up almost the entire tab.

While some states already pay family caregivers, Vermont had long resisted the practice, largely on philosophical grounds. People with developmental disabilities should live as independently as possible, the thinking goes. If families get paid to care for them, they may not be encouraged to go out on their own.

Children with disabilities generally live at home, and continuing payments to their parents has broad support. However, service providers say autonomy is important for adults with disabilities, even when some individuals can't easily express what they want.

"I know my parents had hopes and dreams for me and envisioned what was going to be best for my life," said Delaina Norton, director of long-term supports and services at Burlington's Howard Center. "However, what I chose to do as I entered adulthood may have been very different than what my parents had envisioned. We have to realize that it is no different for people with developmental disabilities."

Yet the distance between what is ideal and what is realistic has widened in recent years, and the pandemic has only further broadened the gap. Some local agencies had more vacant frontline jobs than filled ones last year, while parents said it has become harder and harder to find people willing to perform the mentally and physically taxingwork.

Few alternatives exist for disabled adults who want to live outside of their family home. Beyond several dozen small group homes or staffed residential centers, the only option for most is what's known as "shared living," in which the state pays someone an annual salary to live with and support a person with developmental disabilities. About 1,370 adults who received developmental services last year had such arrangements, costing the state about $39,000 per person on average. About 1,150 disabled adults lived with family.

Some parents resent the idea of sending a grown child to live in a stranger's house and refer to shared living as "adult foster care." A group of about 80 parents is now pushing the state to pursue more residential programs. But such efforts would take years to implement.

Meanwhile, shared-living providers are burning out faster than they can be replaced, and local agencies are struggling to find places for adults with disabilities to live.

Beth Sightler, executive director at Champlain Community Services, said her organization currently has eight people living in "precarious" situations either because their parents are aging or their shared-living providers are on the verge of quitting. The agency is housing one of those people in a hotel while paying for 24-hour staffing.

"The residential crisis means all of us are looking for any option that is going to stabilize a home," Sightler said.

People with developmental disabilities often have complicated medical needs, and many families were hesitant to bring outsiders into their homes during the early days of the pandemic. Some parents had to choose between possibly exposing a child to COVID-19 or cutting back on work to provide the care themselves.

Under the emergency rule, families could convert unspent government funds into direct payments each quarter of up to $5,000, or one-fourth of their annual care budget, whichever was less. The program was optional, and many families chose instead to continue receiving their full slate of services. Others paid themselves for the lost support hours.

The state does not know how many families received payments, nor how much money was spent. The funds flowed through local agencies that were told to track only the total number of payments made, and the dollar figures they reported included checks sent to shared-living providers, too. Still, it's estimated that at least a couple hundred families took advantage of the payments.

O'Brien, the South Burlington mother, prefers using caregivers but said she wants the flexibility to be paid herself when needed. "You are so dependent on ... caregivers showing up," she said. Two quit within the last few weeks, including one who notified O'Brien in a text message, then blocked her number.

She has a somewhat easier time finding replacements than her friends in rural parts of the state, but even then, her next hires will likely last only a year, if that. The constant turnover puts her on edge, and she worries even more about the impact on Christopher. While she's unsure whether he notices the constant change, she suspects he does.

"Paying parents needs to be an option," she said. "It's the only thing that makes sense."

The option would save Vermont money. It costs about $105,000 a year to support one person in a group home and nearly $140,000 in a staffed residential setting — far more than the $20,000 maximum that parents could make under the direct payment program.

The potential for savings is exactly what concerns advocates.

Murphy, the director of the disabilities council, said Vermont already relies on parents for a lot of cheap labor. If parents got the same lousy pay that professional caregivers earn, the state would never actually bear the true cost of supporting its disabled community, she said: "It would just exacerbate the already difficult problem that we don't deliver the services we promise people."

A better idea, she said, is to fund struggling local agencies enough that they can raise salaries and hire more workers. A case in point is Champlain Community Services, one of 15 agencies the state contracts with to provide developmental disability services. Sixty percent of frontline jobs were vacant at the Colchester organization last fall.

Sightler, the director, said many longtime staff members quit because they could no longer afford to live on the agency's $15-an-hour starting wage. "I really didn't know that we could keep people safe anymore," she said.

The situation was so dire that the agency's board voted to raise the starting wage to $18 an hour. The move came at great financial risk to the agency, since it has no guarantee that the state will raise its funding in response. But it proved to be "life saving," Sightler said.

"Immediately, people stopped leaving. Many résumés started coming in. Staff who left came back," Sightler said. Five months later, the agency's vacancy rate had been cut in half.

Drastically raising wages for frontline staff would require a significant state investment, since more than half of the money comes from fixed federal funds. "And it doesn't change the fact that some people want this option," Garabedian said of parent payments.

The state wouldn't declare mission accomplished if the policy were adopted, the DAIL official added. The payments would simply be another alternative, which is "what our system has been predicated on: giving people choices and options."

"I would like to think that it doesn't get us off the hook for anything," Garabedian said.

The state has much to figure out if it decides to make the practice permanent. How much would parents be paid, and where would the money come from? Who would they work for: the state or local agencies? How would the state monitor families to make sure they're providing the right amount of support?