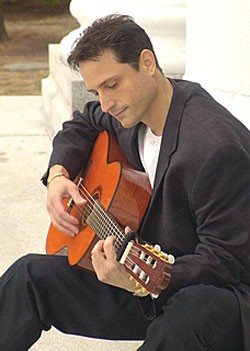 Northern Seas begins with the sound of crashing waves — a storm on the ocean, perhaps. A foreboding synth sustain kicks in, then an ancient-sounding, minor-key melody, and then a haunting female voice. The layered effect is dense and spine-tingling and soothing all at once, a seemingly impossible feat. And that’s just the first track on this CD by Essex, Vt.-based composer Al Conti. Ten more follow, for a total listening time of 49 minutes. With all its sweeping drama and intimate, emotional moments, this could be the soundtrack to a film filled with heroic — if not always victorious — adventures. Say, of Thor, Odin, Loki and Baldur.

Yes, Northern Seas is inspired by Norse legends, which Conti says he researched extensively before creating this often achingly melancholic work. It’s the fourth disc on his Shadowside Music label, and his first to be nominated for a Grammy — for Best New Age Album. Conti, 44, plans to travel to Los Angeles for the February 12 ceremonies, where he may run into his competitors for the award: jazz guitarist Pat Metheny, for What’s It All About — a solo acoustic album of classic covers that seems miscategorized — and more traditional new-age artists Michael Brant DeMaria, for Gaia; Peter Kater, for Wind, Rock, Sea & Flame; and Zamora, for Instrumental Oasis, Vol. 6.

Conti, born in Argentina, has lived in the U.S. for 28 years and Vermont for 14. When he came here to visit a friend about 15 years ago, it was love at first sight — for the place. “I just felt the energy here and I knew this was home,” Conti says. So homey, in fact, that he convinced his parents to move here, too. “They live two doors down,” he notes. “They clearly felt the same.”

Conti has always been surrounded by creative types — his mother was a ballerina, his father an architect and poet, his grandfather a concert pianist. So perhaps it’s no wonder that, at the age of 3, Conti announced to his parents he was going to be an actor. And he did just that, carving out a career that included television, stage, film and radio gigs in both Argentina and the U.S.

“I always felt alive when I was acting,” Conti says, “understanding how someone else thought and felt — psychology was my second passion.”

But a love for music was always there, too, and eventually it won out.

“When music sort of took over, I realized I could not do both,” says Conti, who left behind acting — and the constant traveling — about eight years ago. He says he approaches music “as an actor,” and, indeed, his compositions seem filled with invisible characters, their stories shaping the arc and rhythms of his songs. The tales that most resonate with him are not the stuff of TV dramas, however, but of myth, legend, fantasy.

“When I’m composing an album, I focus for the whole time on working with ancient tales,” Conti says. “I can feel that energy — it’s almost ancestral. It’s really hard to explain.” Someday, he says, he’ll explore the Argentinian folk tales of his former homeland.

Conti’s sensitivity to timeless “energy” does explain why he gravitates toward the new-age genre. “It’s always called to me,” says the composer. “At age 20 I was listening to Enya. [The genre] also lends itself to what I like: books, stories — it’s like a movie with music.”

Conti released his first album, Shadows, in 2006. The following year brought Poeta, a song for which he won a “best-of” award from Mystic Soundscapes Radio. With 2008’s Scheherazade, Conti dived into Middle Eastern legend, and began to crest on the charts: The exotic album was No. 1 for several months on the Zone Music Reporter and won a Best World Album award from that industry arbiter. A Grammy nomination for Northern Seas brings Conti broader recognition, whether or not he wins the prize.

And if he does, it’s an award that Conti will happily share with his local crew. Andre Maquera of West Street Digital in Fairfield was guitarist and engineer for the album. “He’s amazing — talented and personable, funny, just a delight,” enthuses Conti. He also credits Maquera with helping to find other Vermont musicians, including whistle player Timothy Cummings of Monkton and young fiddler Hannah Beth Crary, a student at the University of Vermont. “She was just 17 years old when we did the album,” Conti marvels. “She’s incredibly gifted.”

The presence of acoustic, old-timey instruments humanizes Conti’s compositions and helps tell their wordless tales; his is not an ethereal, synthetic sound but one that is grounded in… let’s call it earth energy. “Some new-age artists like listeners to get lost,” Conti acknowledges. “I would like them to embark on a certain kind of journey.”

Looks like Al Conti is on a journey of his own — and not just to L.A.

The 54th Grammy Awards, held at the Staples Center in Los Angeles, Calif., will be broadcast on CBS on Sunday, February 12, at 8 p.m. EST.