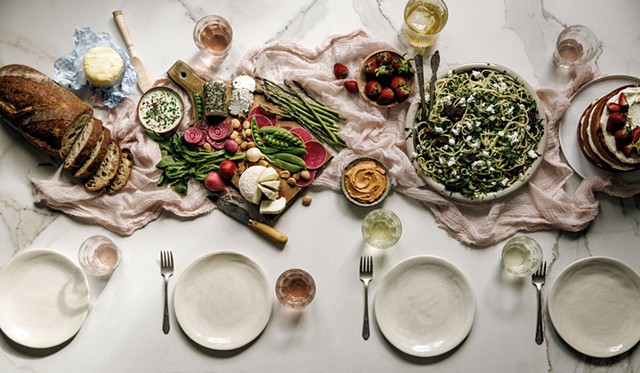 Something about the term "influencer" feels very ... Kardashian. Evocative of half-naked photo shoots and overpriced skin-care products, the buzzword might not seem to have a place in the Vermont lexicon.

But, broadly defined, influencers are just social media users who typically have many followers — think tens of thousands to millions — and serve as de facto arbiters of what's good. Or of what's tasty: Influencers of the food and drink variety festoon their well-manicured Instagrams with drool-inducing professional photos that put Williams Sonoma catalog spreads to shame.

To build brand awareness, food and beverage companies partner with influencers to swap some form of compensation for posts that feature their products. In the past five years, this trend has picked up in Vermont, where the locally grown eats are usually as appealing to the eyes as they are to the palate.

According to Burlington-based influencer Carey Nershi, whose account @careynotcarrie has more than 51,300 followers, these collaborations within the state's small foodie world are about more than making a buck.

"Because we're such a tight-knit community, it feels organic and it makes sense," she said.

Nershi, 36, spends about 20 hours a week on her partnerships with brands such as Vermont Creamery, NU Chocolat, Shelburne Farms, Philo Ridge Farm and Republic of Vermont maple syrup. She charges for her work but has another freelance gig that pays the bills, as many influencers do.

A recipe-development collaboration, plus photos and posts, might cost a client about $1,300, she said, though that number is negotiable.

"People are doing things that I really believe in and like anyway," Nershi said. "I like to be a little bit flexible just to help out."

Through Instagram analytics, Nershi knows her biggest audience is American women between the ages of 25 and 45. That's almost exactly the demographic Lake Champlain Chocolates is aiming to reach. The two work together to create and shoot photos of recipes that use the brand's confections, which Nershi then posts.

Lake Champlain Chocolates has a loyal Vermont following, but to reach an audience farther afield, it also partners with more than 100 micro-influencers — users with fewer than 50,000 followers — from various states.

For smaller companies, targeting influencers with more specific audiences can be the wisest strategy, said Nicole Ravlin, communications consultant and president of Shelburne public relations agency Junapr. Casting too wide a net with hyper-popular influencers can be expensive and yield dubious results.

"If you are marketing nationwide, you still want to think geographically or in a segmented way," Ravlin said. "Telling the right group of friends is what will actually change the marketing in terms of sale."

Ben & Jerry's deploys this strategy, albeit on a larger scale. The 15 to 20 general influencers with whom it works consistently — plus 10 to 12 vegan influencers — span the geographical gamut, according to Lindsay Bumps, B&J's "PR media maven." But the brand also works regionally to bring influencers to B&J's events on their home turf.

A couple of times a year, groups of B&J's influencers receive compensation in the form of "experience" — that is, a weekend in Vermont. Through a program called Inside Scoop, influencers learn how the company works, from the Waterbury factory to the South Burlington office, and enjoy a handful of other quintessentially Vermont adventures on the company's dime. The goal is to develop a strong relationship between influencers and the brand that continues well after they've left the Green Mountains.

"We want them to be the first to know about and taste new flavors, new innovations," Bumps said. "There's always an ongoing relationship," she added. "They're almost like an additional part of the family."

Influencers aren't obliged to post about their Vermont weekends, but they do. New York-based influencer Tessa Gluck, who has amassed a following of more than a half million on her Instagram @foooodieee, was on one of the first of these trips in 2017. Colorful shots of B&J's products crop up frequently on her junk-food-themed account.

"I have to say, that weekend was probably the most memorable experience I've ever had through my Instagram," Gluck said. That isn't an insignificant metric; owing to her online popularity, the 27-year-old routinely is comped restaurant meals and has products delivered to her door.

Since the trip, Gluck said, Bumps has stayed in touch, clueing her in on "secret meet-ups" in New York and new flavors such as this year's political pint, Pecan Resist.

"It's more than just an ice cream brand, and that's what I really got when I went there," Gluck said.

In June this year, B&J's was one of several Vermont food companies that hosted a group of six German influencers on a food- and sustainability-themed trip around New England, organized by Brand USA. The goal, said Sara DeFilippi of the Vermont Department of Tourism and Marketing, was to inspire participants to share tidbits from that tasty tour with their blog and Instagram followers, spreading the image of Vermont as a food tourism hub.

Caledonia Spirits also hosted the influencers at its new distillery in Montpelier — one of two groups of visitors this summer. Like B&J's, Caledonia pays its partners in "experience" — in this case, a distillery tour and a bottle of its flagship liquor. 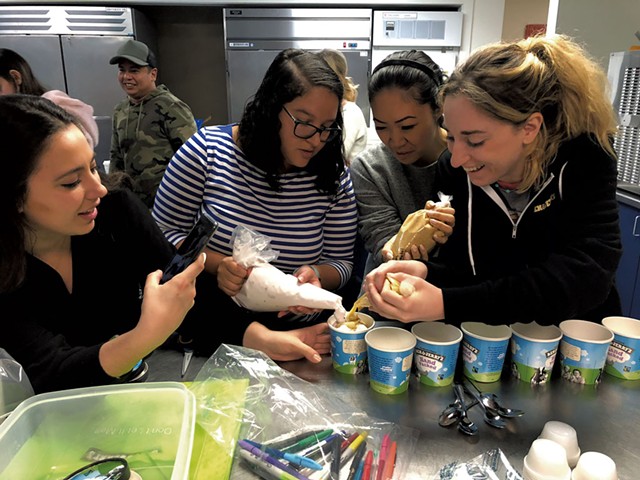 Harrison Kahn, Caledonia director of brand strategy and development, asks influencers to include the hashtag #barrhillpartner in photo captions for transparency. Search it, and you'll see the artistic product of these partnerships: dazzling photographs of colorful cocktails in gorgeous glassware in front of labeled Barr Hill bottles.

"Barr Hill has grown over the years by word of mouth," Kahn said. "This feels like an extension of that.

"We have no interest in doing big media campaigns or advertising, and we have no chance competing with [spirits producer] Diageo and other companies with huge marketing strategies" he added. "This is relatively inexpensive and unleashes an incredible creativity."

Restaurants are hopping on the social media bandwagon, too. Ravlin said chefs are sometimes reluctant to work with influencers, given the added pressure it creates to create a postable experience. But Jennifer Wyman, marketing director for Vergennes Laundry by Ck, said she finds these social media partnerships invaluable.

"Everyone's thinking with their eyes these days," she said. The café comps meals and drinks for users who post about their experiences. "We've tried to find people who not only love our food but love our aesthetic." 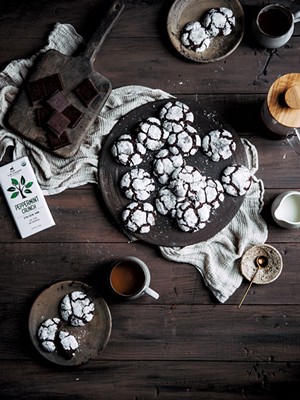 It's textbook marketing strategy with a 21st-century twist — although everyone seems to agree that it's still important to advertise in more traditional media.

Photo-centric platforms make compelling product design and packaging a must. That can pose a challenge to companies such as Lake Champlain Chocolates, given that chocolate isn't the most photogenic of foodstuffs. But Meghan Fitzpatrick of the brand's public relations team said the company will be developing more colorful pumpkin and peppermint bites in the near future. Instagram-ability was not the only motivating factor, she said, but it was definitely a consideration.

Brands that already have eye-catching products, by contrast, sometimes stumble into endorsements. Shacksbury Cider, for example, gets tagged in unsolicited posts about its unique matte cans all the time. Canteen Creemee Company in Waitsfield, with its colorful mural backdrop, is practically begging its customers to snap a pic.

"They're creating this experience that is made to be shared," said Ravlin. "And if we know each other and have similar tastes, and I like it enough to share it on my own social media, you'll be more inclined to try it."

As evidence, she held up a recently posted photo of a Canteen Creemee maple cone rolled in crunchies and topped with a nimbus of cotton candy. "Where is this Mecca you speak of??" a user commented.

"We all influence each other," she said with a laugh.