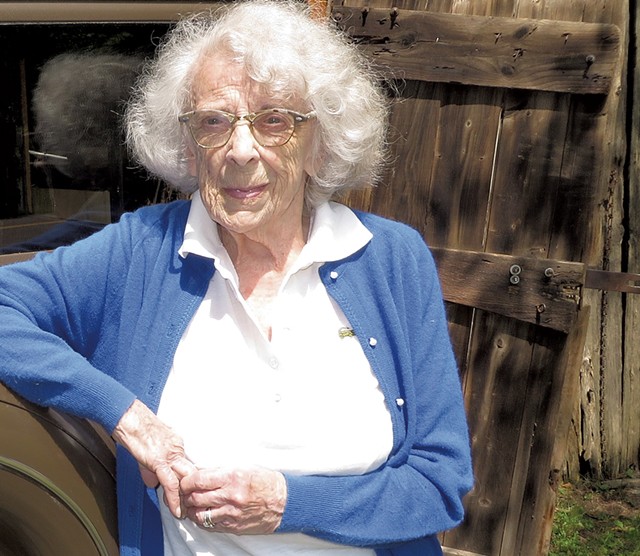 On a warm Sunday afternoon in early May, I found myself shouting at a 109-year-old woman from a folding chair on her lawn in Waterbury Center. To sum up the experience in the manner of a haiku: Social distancing / loud, erratic gusts of wind / quite hard of hearing.

But Florilla Ames, seated like a queen in a wooden chair on her porch, wearing a cornflower blue sweater and the kind of pants that would correctly be called slacks, didn't seem the least bit perturbed. When your frame of reference encompasses 19 presidents, one Great Depression, two World Wars and two global pandemics, it probably takes more than a bellowing journalist with a thimbleful of life experience to get under your skin.

For the past 50 years, Ames has lived in the shingled house on Barnes Hill Road where, more than a century ago, she and her family weathered the 1918 influenza outbreak. She was 6 years old when her parents bought the land, a 138-acre parcel overlooking Mount Mansfield to the northwest. When Ames was growing up, the property was a working farm, with 40 dairy cows, chickens, geese and the occasional pig.

"Back then, you didn't go to a grocery store," she said, her dandelion-fuzz-colored hair blowing across her glasses. "You got what you needed out of the ground, or from your own constitution."

Ames, the second of three children, was born on March 17, 1911, to Ida and Arthur Perkins, in Arthur's mother's house in Montpelier. Not long after the family moved to Waterbury Center, in the fall of 1918, the influenza pandemic arrived in Vermont. On October 4, state health officials ordered the closure of schools and banned all public gatherings. By then, the flu was already ravaging entire communities; rural telephone lines went silent, their operators incapacitated by illness.

Barre, one of the hardest-hit towns in the state, reported 2,000 cases at the end of the first week of October; St. Johnsbury recorded nearly 850, according to Vermont historian and writer Mark Bushnell. Ames believes that her older brother, Ernest, then age 11, brought the virus back with him after visiting their grandmother in Montpelier, where more than 500 people had come down with the flu.

The whole family fell ill in quick succession. Ames and her 4-year-old brother, George, suffered a mild bout and rebounded within a week; their parents, stricken in unison, were slower to recover.

One of the idiosyncrasies of the 1918 pandemic, still not fully understood by epidemiologists, was its deadly impact on young adults: According to the Centers for Disease Control and Prevention, mortality rates peaked among people between the ages of 20 and 40. Hundreds of thousands of children lost one or both of their parents; in New York City alone, some 31,000 children were orphaned in just two and a half months.

Even now, said Ames, she can picture her sick mother and father, lying in bed. A doctor from Waterbury came to their house and brought medicine bottles filled with a dark emerald liquid; she didn't know what it was, but she thought the color was beautiful.

Ames doesn't recall being afraid — at 7, she said, she wasn't quite old enough to grasp the situation. But she does remember fetching things and dusting at the behest of her mother, who, as Ames put it, "ran the house from flat in bed." In the midst of a pandemic that had shut down the world, there was still no respite from dusting — though, Ames confessed, she never saw much point until she could write her name in it.

While her parents were confined to their room, a man who lived down the road came to their house every day to take care of the farm chores, feed the woodstove, and look after Ames and her brothers. As Ames recalls, his last name was Houston — she can't remember his first name — but she can summon a vivid image of him warming his feet in the oven after working outside. Miraculously, she said, he never caught the flu.

Under Houston's watch, her diet consisted exclusively of her mother's canned tomatoes on toast: "With a man and no grocery store, that was about all we could get," she said. Spartan foodstuffs notwithstanding, Ames believes that Houston's help — and the vitamins in the canned tomatoes — pulled her family through the pandemic.

"I'm terribly sorry that we weren't more ready for something like this. We forgot, I guess." Florilla Ames tweet this

Scores of others weren't so lucky: In one of the neighboring houses, said Ames, a mother, father and child all died within days of each other. By the end of 1918, the State Board of Health had registered 43,735 cases and 1,772 deaths.

From Ames' point of view, the human response to the threat of a new pathogen hasn't changed much over the last century: "Like last time, people are either doing what they can to help, or to help themselves, and other people are just not paying any attention to it. And that's what scares me," she said. "I'm terribly sorry that we weren't more ready for something like this. We forgot, I guess."

Of course, very few among us have such long memories. Ames has outlived her brothers by more than half a century; both died young of heart attacks. For 70 years, she was married to Darrel Ames, who died in 2008. The couple met at an ice skating rink in Derby Line, where Florilla worked as a teacher. They married in 1938 and moved to Springfield, Mass., for Darrel's job with the Eastern States Farmers Exchange, which later became Agway. When Darrel retired in 1976, the two returned to Florilla's childhood home. They rode snowmobiles together well into their nineties.

These days, Ames keeps a simple routine. She wakes up at about 8 a.m. in her second-floor bedroom, where she sleeps "against everyone's advice to come down." ("I'll come down when I'm ready," she explained.) She listens to audiobooks and her local radio station, WDEV, on very high volume. Her live-in home health aide, who has been with her since December, takes her vitals.

"I'd been in the hospital quite a bit since last July, but I've been trying to get better ever since then," said Ames. "I was beginning to get discouraged, at 109." She flashed the teensiest of smirks. "But now, I think, I'm finally accomplishing it."