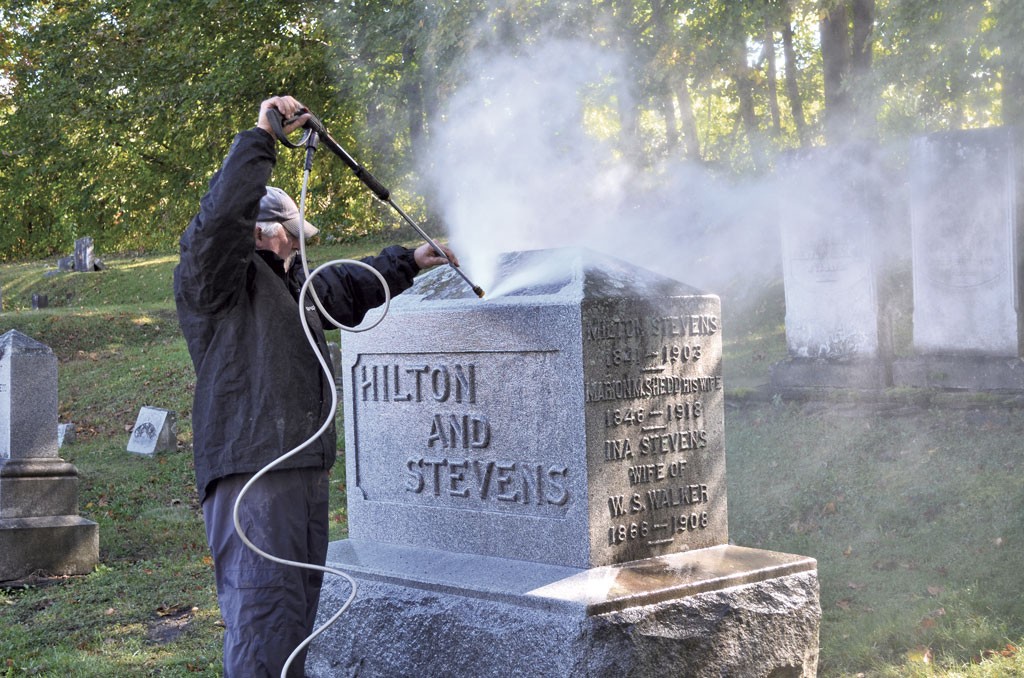 One early October morning, Jim Woodman strapped a yellow harness around a leaning headstone in Richmond's Old Village Cemetery. The harness was clipped to a pulley system set up nearby, and as Woodman casually tugged on a chain, the marble slab levitated. Twenty minutes later, the stone was back on the ground and upright.

Normally Woodman works alone in out-of-the-way cemeteries. That day a crowd of seven, invited by the Richmond Historical Society, marveled as he washed away decades' worth of mold and lichen mottle from his next patient: a large granite slab.

Over the past few years, the Colchester resident has restored roughly 100 graves belonging to Vermonters who fought in the Revolutionary and Civil wars. And Woodman isn't the only local who spends countless hours tending to the tilting, cracked and toppled headstones of long-dead strangers.

Most Vermont towns appoint cemetery commissioners to oversee basic maintenance — such as mowing and fence mending — at larger cemeteries. But those unpaid officials can only do so much with their modest budgets. Vermont has more than 1,900 documented cemeteries, many of which are too small to merit a commissioner. And winters are hard on headstones — frost and snow destabilize them, especially those without proper foundations.

Picking up the slack is a loosely affiliated group that includes commissioners and self-appointed cemetery stewards — all committed to tending some of the state's most dilapidated headstones on their own time.

One of these is a corrections supervisor who puts inmates to work in abandoned cemeteries. Another is a retired history teacher-turned-sleuth who recovers stolen gravestones. A third is the granddaughter of the founder of an organization called the Vermont Old Cemetery Association (VOCA), which cobbles together money to fund restorations.

Woodman, a 55-year-old former Burlington firefighter, at first seems an unlikely cemetery devotee. When one of his spectators asked how he got involved in gravestone restoration, he appeared momentarily stumped. "It's just something I started to do," he said, noting that he's never been a "history buff." Solidly built, with a graying handlebar mustache, he talks with a Boston accent unspoiled by three decades in Vermont.

Woodman explained to the small crowd that he mowed cemeteries on the side while working as a firefighter. After retiring, he started fixing up gravestones because it was more exciting than mowing. Now he runs a one-man restoration business, 3 Stones of VT, and is hired by towns and civic organizations to minister to particular cemeteries.

Repairing veterans' stones is a side project that started after Woodman poured a foundation for the cemetery monument company at which Deborah Hardy worked.

A genealogy enthusiast who considers cemeteries to be "galleries of stone," Hardy had tracked down five of her New England ancestors who fought in the Civil War. It bothered her that many of their contemporaries' graves were overlooked, she said, so she pitched Woodman the idea of raising money to restore Civil War veterans' stones.

Now he does the repair work while she finds donors and researches the soldiers' pasts, using town records, online military databases and pension records. Woodman said he gets some compensation for his labor, but most of the money is used to purchase materials.

At the Old Village Cemetery, Hardy, clad in a purple scarf and cable-knit sweater, snapped photos on her iPad and narrated excitedly as Woodman worked.

During an interview days later, Woodman was equally animated as he described an upcoming project. He and Hardy hope to persuade local gun clubs to donate enough money to purchase a granite headstone for Amos Bunker — "one of the original sharpshooters" in the Civil War, buried without a stone in Burlington's Greenmount Cemetery. "It consumes you," Woodman said.

No one knows that better than Charles Marchant, a Vietnam War veteran from Connecticut who came to Townshend in the early 1970s to teach history at Leland & Gray Union High School.

Now 71, Marchant never intended to become a custodian of local cemeteries. As he recalls, he fell asleep during town meeting in 1973. As a joke, his friend nominated him to serve as cemetery commissioner, and residents elected him to the uncontested post while he slumbered. Four decades later, he still holds it.

Marchant did have prior experience in cemetery work; his great-uncle was a church sexton, and Marchant and his cousins used to assist him by trimming the grass around the gravestones with scissors.

In his summers off from teaching high school, Marchant did cemetery maintenance, which, like Woodman's avocation, evolved into a part-time stone-restoration business.

A wooden casket will inevitably decay, Marchant explained, and "as it disintegrates, it creates a cavity." Frost fills that cavity during the winter and, when it melts, the grave tends to tilt. Another problem, he said, is the woodchucks that take up residence in the holes.

Speaking by phone after an evening cemetery commission meeting, Marchant explained that he sometimes finds himself doing his job in antique stores. He frequents them seeking worthy candidates for his postcard collection, which currently numbers 20,000. But he also keeps an eye out for potentially stolen gravestones and other funerary objects, often identifiable by Victorian-era death symbols such as a weeping willow, reclining lamb, sleeping baby or broken fruit vine. When he comes upon such a relic, Marchant jots down a description and then researches its provenance.

"I usually do not confront the shop owner right away, because, if you do, [the object] will disappear," he said, meaning the item would be taken from display and divested on the down-low.

When Marchant's gravestone research indicates foul play, he's dogged about bringing justice to the interred. Selling pilfered funerary objects, he pointed out, is a felony.

The graveyard vigilante garnered headlines after he recovered a gate in a Newfane antique shop and determined that it belonged at the gravesite of Emily Dickinson's father in Amherst, Mass. Using receipts, police traced the gate back to an antique dealer who sold it in the 1970s. That dealer was dead, however, and the case went cold.

Right now, Marchant is trying to trace the origin of a headstone belonging to one Susan Fox. Currently sitting in his yard, it was delivered to him by the Windham County Sheriff's Office, where it had been in evidence storage for years. Marchant determined that Fox's husband had been a soldier in the French and Indian War, and he has a hunch that she was buried in Walpole, N.H.

Like Marchant, Tom Giffin is a former history teacher with a commitment to giving Vermont's long dead their due. Laid off from his teaching job by budget cuts, the Rutland resident is now the interim superintendent at the Marble Valley Regional Correctional Facility, where he makes the most of both his scholastic and criminal connections.

Under Giffin's watch, inmate work crews regularly tend to local cemeteries — as do students of various ages. He recruited the Mount St. Joseph Academy football players to reposition a 200-plus-pound monument that vandals had toppled — and to plant daffodil bulbs around its base. Giffin has also put the Castleton University football team to work, and he regularly delivers history lessons to middle school students while they apply epoxy to broken stones.

Giffin is in his mid-fifties and serves as president of VOCA. "We don't have a lot of money," he said, but "we are very savvy."

The late Leon Dean, an English professor at the University of Vermont, founded the association in 1958 to preserve abandoned and neglected cemeteries. Today it has several hundred members — including Marchant and Dean's granddaughter, Dianne Leary — who meet twice a year.

Leary, 57, of Charlotte runs a house-cleaning and house- and pet-sitting business. She also carries on her grandfather's legacy: Her family regularly tends to a Monkton cemetery where some of their ancestors are buried. And Leary serves as VOCA's grants administrator, in charge of disbursing upwards of $750 to individuals or groups who have worthy restoration proposals.

As these cemetery caretakers age, they hope new enthusiasts will pick up the mantle.

Leary noted that it's been challenging to get people to follow through on their grant projects. She cited the example of two elderly women whose project was derailed when one of them died.

Marchant observed that VOCA "needs some younger people, and younger people in general don't think of these things until they are older."

Giffin is working hard to dispel the notion that he and his ilk are "morbid cemetery people." During one conversation, he tried three times to persuade this reporter to join VOCA, pointing out that annual dues are only $10.

Though VOCA's membership skews gray, Giffin insisted that it's not all old people. And he sees reason to hope for the future of cemetery stewardship. When someone crashed into a Rutland* cemetery after leading police on a high-speed car chase, he noted, his student volunteers were the most "outraged" about the damaged headstones.

Correction 10/30/15: The cemetery that was damaged during a car chase is located in Rutland, not Townshend.

The original print version of this article was headlined "Grave Concerns"