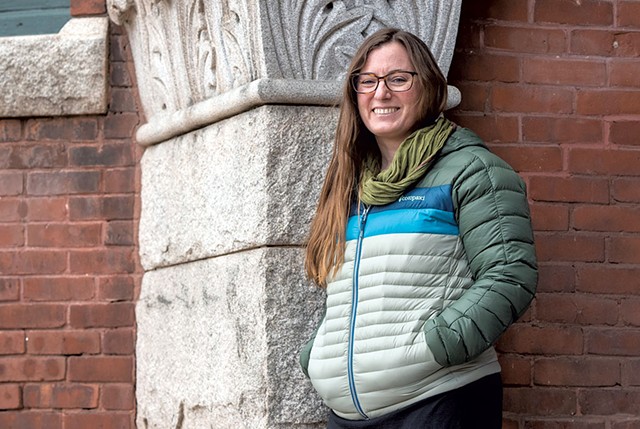 When she took the job as Vermont's state librarian in February, Cathy Delneo pledged to serve a uniquely Vermont institution: the state's far-flung network of 185 public libraries.

It's a new setting for her; she spent 15 years in the San Francisco Public Library system and oversaw 27 urban branches. But Delneo, a South Burlington native who has a master's degree in library and information science, sees the core duties of the big-city and small-state positions as quite similar.

As a branch manager in the Haight-Ashbury neighborhood and then chief of branches for the San Francisco system, Delneo said, she helped patrons find the books or information they needed, mediated disputes between people competing for the same public space and steered locals to social services.

"In the Haight, there were a lot of people experiencing homelessness, especially young adults and teenagers," she said. "I would walk them to the social service place for teens that was around the corner."

Delneo also helped communities, such as book groups and knitting circles, find spaces to meet together. And sometimes she just provided a listening ear. "A lot of people would come in just to talk to someone, to have that connection," she said.

In Vermont, it is other librarians who come to Delneo when they need help handling an issue or obtaining funding. As both state librarian and commissioner of the Vermont Department of Libraries, she's a resource for its public and academic libraries.

"Sometimes people think I'm in charge of all the public libraries and school libraries, but we don't serve that role," Delneo said. "We provide support to help improve the quality of library service, to maintain access to materials, and to help with systems and structures." That includes Vermont's interlibrary loan system and certification programs for librarians.

With a budget of $3.2 million, Delneo said, "I need to learn the available grants, how much time it will take to administer those grants and try to match things up so we can use the funding we have available to provide the best service."

Delneo accepted the position after Jason Broughton left to become director of the National Library Service for the Blind and Print Disabled at the Library of Congress.

Vermont's library system is a lot different from San Francisco's — and from most others. By a quirk of Vermont's governance structure, which tends to favor municipal control over county rule, individual libraries are based in towns, without the branch network common in many systems.

"I don't really know of any state that has as many tiny, individual libraries," said Kevin Unrath, director of the Pierson Library in Shelburne and a past president of the Vermont Library Association.

"Schools, police departments, wastewater treatment, pretty much everything in this state has more local control than anywhere else, including the other New England states," he said. "But libraries are perhaps most emblematic of this."

The ownership, governance and offerings at Vermont libraries vary widely. Some are nonprofits; others are owned by the town. Some are richly supported in well-appointed historic buildings; others occupy tiny spaces with long-delayed maintenance problems.

The system includes academic libraries, such as those at Vermont's colleges and universities. Mike Roy, dean of the library at Middlebury College, is president of the Vermont Library Association this year.

"Even though it is a very diffuse, distributed system where the state library doesn't have a ton of authority, they can use that office to bring together the different folks who are involved," he said.

Roy noted that Delneo is well suited to implement the state's new ebook system, Palace, which aggregates audiobooks and ebooks from many vendors into one app; it's becoming available through local libraries this year.

"This is a bit of a heavy lift for any individual library to pull off," Roy said. "The state library has the ability to organize the technology and put together the capital."

"I was a really curious kid; I always wanted to know more than whoever was teaching me had time to tell me." Cathy Delneo tweet this

Growing up in South Burlington, Delneo spent hours at the public library with her sister and brother while her dad — an English teacher at Rice Memorial High School — carried out genealogical research.

"I was a really curious kid; I always wanted to know more than whoever was teaching me had time to tell me, so I'd be directed over to the books," Delneo said. "And there I would find more answers ... and more questions."

She played the cello in the Vermont Youth Orchestra from grades 6 through 12, traveling around the state to perform at other schools. She also was a competitive swimmer in high school and worked as a lifeguard in summers.

Later, as Delneo prepared to graduate from Vassar College in Poughkeepsie, N.Y., with a degree in philosophy, she considered her career options.

"I realized that, as much as I liked studying philosophy, it wasn't really a moneymaker, and I had student loans," Delneo said. She pondered becoming a speech therapist — a job she knew about through her own struggles with a childhood speech delay.

But "I looked up what it takes to be a speech pathologist, and it was a lot of science classes I hadn't taken," Delneo said. Then she remembered how much she'd always loved researching new topics at the Orchard School library.

"I was obsessed with penguins in third grade," she said. "I went down the rabbit hole of learning everything I [could] about the penguins of the world. I spent a lot of time in that library when I was a kid."

After earning a master's in library and information science from Rutgers University, Delneo, then 28, started out as a children's librarian in New Jersey. But a mishap during a vacation in 2004 would alter her course.

While she was surfing at Cape Hatteras in North Carolina, a tiger shark bit her lower leg.

Four surgeries followed, along with 28 days of hospitalization over a period of six weeks. Delneo bears no lasting damage — only scars — from the attack, but she said it changed her perspective. When she returned to work, she switched roles at her library.

"It was challenging to have that happen and just resume the same work I was doing previously, as if nothing had changed," Delneo explained. "In a way, it was a catalyst to branch out a little bit more."

Two years later, she was working in San Francisco.

The Bay Area was a perfect place for Delneo to practice another passion: open-water and distance swimming. She had first discovered open-water swimming in high school, during a music camp at Lake Dunmore. She swam across the mile-wide lake every morning. When she was living in New Jersey years later, Delneo returned to distance swimming after watching an open-water competition in the ocean.

Since then, she's added cold-water swimming to her athletic résumé, completing a one-mile swim in the wintry waters of Lake Tahoe and a 16-kilometer solo swimming event in the San Francisco Bay. Delneo also circumnavigated Manhattan in a swimming marathon — a 10-hour odyssey in June 2014 that nearly landed her in the hospital when her lungs filled with fluid.

These days, Delneo competes in 200-meter swimming events in places such as Vermont's Lake Memphremagog, where lanes are cut in the ice for the winter competitions. Delneo said the kind of endorphin rush that might take miles of running to produce occurs after just a few minutes in frigid water.

One of the challenges she's facing this year as state librarian is long-overdue building maintenance at Vermont's public libraries.

The Department of Libraries is requesting $15.9 million in federal COVID-19 relief money to fix leaking roofs, disintegrating floors and other such long-standing problems at some of the historic buildings. It's been 25 years since the public libraries got state or federal money for building maintenance, according to the department.

In the 21st century, libraries do more than lend books: They serve as community gathering places, offer classes, organize events and lend out everything from moisture meters for firewood to microphones for musicians.

"We do really well in the space of circulating nontraditional things," Delneo said of Vermont libraries. "You can borrow a game or a Bundt pan."

Many of the state's libraries took on a new role during the pandemic, providing reliable internet service at a time when nobody could come inside. With the free connectivity, library parking lots became popular places for remote workers.

These days, some attention has shifted to a different and highly politicized issue: calls from community members to remove certain reading material from the shelves.

Delneo said she advises librarians to have a process in place for handling such challenges so they're not caught by surprise. While resolving book challenges is up to the library's local governors, the Department of Libraries can answer questions and connect librarians with others who have been through similar situations, she said.

The changing of the guard isn't something that will affect patrons, at least not right away. Delneo said she's looking forward to beefing up the state's interlibrary loan system. But any big projects will have to wait until a statewide study of libraries is completed next year. Delneo is chair of a working group on the status of libraries, which is holding listening sessions with librarians to hear what the small institutions need most.

"Right now, I am primarily trying to get the lay of the land and see what's needed," she said.